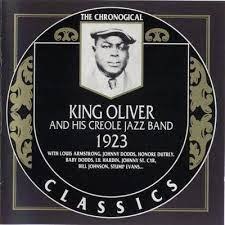 This time the title’s completely misleading. “Dipper Mouth” was one of Louis Armstrong’s early nicknames, and because he’s the second cornetist in King Oliver’s band you might expect Armstrong to have a featured part. He doesn’t. The two soloists on “Dipper Mouth Blues” are clarinetist Johnny Dodds, whose two playful stop-time choruses are shot through with melancholy, and Oliver himself, Armstrong’s mentor and perhaps the first master of the wah-wah mute. His long, growling moans on the horn would be imitated by every trumpeter for the next 20 years. (Behind him, you can hear the improvised harmonies and counterpoints of the one who would be imitated by every trumpeter for the next 100.) If the basic joy of the performance isn’t already clear, Oliver crystallizes it with the capper to his solo, a sung shout of “Oh, play that thing!”

Recently I was at a café wrapping up a day by reading Edwardian ghost stories, bored by the music on the sound system and not … END_OF_DOCUMENT_TOKEN_TO_BE_REPLACED

“I live close to the ocean here in Los Angeles, so I’m surfing pretty much every day, and fortunately my family is close by—my folks, … END_OF_DOCUMENT_TOKEN_TO_BE_REPLACED

When I started to put this list together, first I wanted to think about the harmonica players that had an impact on my playing, on … END_OF_DOCUMENT_TOKEN_TO_BE_REPLACED

Zodiac Suite (Asch, 1945; reissued by Smithsonian Folkways, 1995) Williams’ masterpiece is both an impressionistic representation of the signs of the zodiac and a striking … END_OF_DOCUMENT_TOKEN_TO_BE_REPLACED