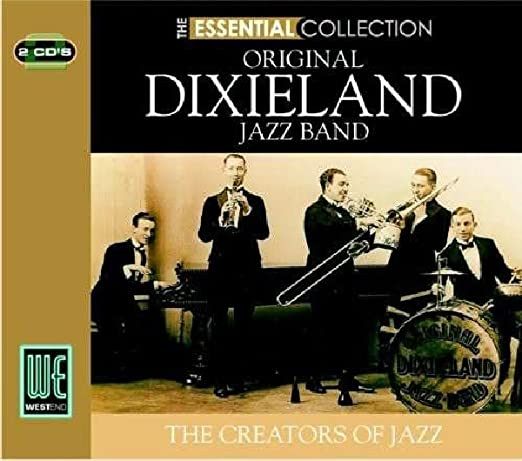 “Livery Stable Blues” was the first jazz record ever made, and more importantly the first hit jazz record ever made. It sounded completely new and frenetic in its time, and the animal sounds that the clarinet (Larry Shields), cornet (bandleader Nick LaRocca), and trombone (Eddie Edwards) made felt like the height of irreverence in 1917. With the debut of this all-white band from New Orleans, jazz became a craze that only got bigger from there. Yet when we listen back today, “Livery Stable Blues” sounds remarkably stiff: It has the famous New Orleans “Big Four” syncopation and the polyphonic fun, but the rhythmic spice just isn’t there. (Go back to “Black Bottom Stomp” and make the comparison.) Nevertheless, this is the one that lit the fuse.

Recently I was at a café wrapping up a day by reading Edwardian ghost stories, bored by the music on the sound system and not … END_OF_DOCUMENT_TOKEN_TO_BE_REPLACED

“I live close to the ocean here in Los Angeles, so I’m surfing pretty much every day, and fortunately my family is close by—my folks, … END_OF_DOCUMENT_TOKEN_TO_BE_REPLACED

When I started to put this list together, first I wanted to think about the harmonica players that had an impact on my playing, on … END_OF_DOCUMENT_TOKEN_TO_BE_REPLACED

Zodiac Suite (Asch, 1945; reissued by Smithsonian Folkways, 1995) Williams’ masterpiece is both an impressionistic representation of the signs of the zodiac and a striking … END_OF_DOCUMENT_TOKEN_TO_BE_REPLACED