The history of jazz musicians “ghost-playing” parts in films for non-playing actors is a long and storied one. For every Jamie Foxx (who did play and sing for the title role of Ray), there are dozens of actors who merely mimed their way through their portrayals of gifted musicians. Hey, they’re actors. What did you expect? You didn’t really think that Don Cheadle learned to play the trumpet as well as Miles Davis, did you? It’s true that many of the actors did learn the rudiments of their appointed instrument, but that was just so they could pass as a professional musician and not look like William Bendix standing clumsily at the plate in The Babe Ruth Story.

Speaking of passing, with so much attention being paid lately to the appropriation of roles along lines of gender and race, somehow ghosting has stayed fairly consistent in its representation. Tin-eared actors may have passed as virtuoso musicians, but no white jazz trumpeter ghosted the role of Dizzy Gillespie or Miles Davis.

The list we compiled here—which is in chronological order—omits performances by jazz artists in animated films such as The Jungle Book (Louis Prima), Lady and the Tramp (Peggy Lee), and most recently Soul (Jon Batiste, Tia Fuller, Linda May Han Oh, and Marcus Gilmore). We also excluded famous ghost performances by non-jazz singers like Marnie Nixon in West Side Story and Trudy Stevens in White Christmas. Our emphasis is on top-notch jazz musicians providing their talents behind the scenes to make both real and fictional musicians come alive on the screen. And help several actors win Academy Award nominations. Jazz may not sell, but it produces memorable characters, mostly tragic.

Harry James for Rick Martin, played by Kirk Douglas in Young Man with a Horn (1950) 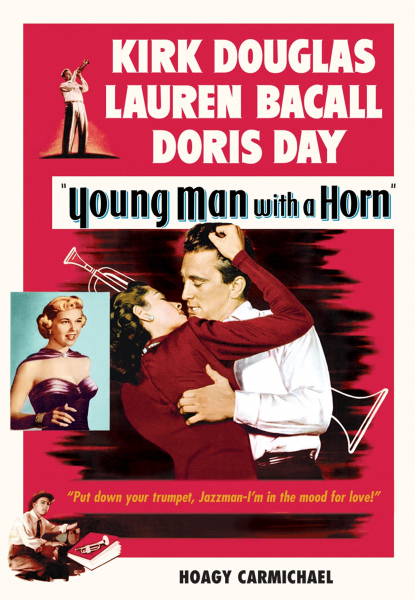 This fictional reworking of the story of Bix Beiderbecke benefited from the involvement of Hoagy Carmichael, who not only played a character in the film (Douglas’ sidekick) but also acted as an unofficial adviser, in large part because he knew Beiderbecke. [Spoiler alert: He also knew firsthand about musicians who drank themselves to death. —Ed.] Douglas was only 33 when he made this movie, and he supposedly leaned heavily on Carmichael for his portrayal of the equally tragic Rick Martin character. But it’s star bandleader James who plays the actual trumpet parts here.

Learn more about Young Man with a Horn on Amazon.
JazzTimes 10: Jazz on Film

Branford Marsalis and Howard Alden on Ghost Performances in Movies

In 2020, to celebrate JazzTimes’ 50th anniversary, we made a bold (some would say foolhardy) call: the top 50 jazz albums of the past 50 … END_OF_DOCUMENT_TOKEN_TO_BE_REPLACED

In 2020, to celebrate JazzTimes’ 50th anniversary, we made a bold (some would say foolhardy) call: the top 50 jazz albums of the past 50 … END_OF_DOCUMENT_TOKEN_TO_BE_REPLACED

In 2020, to celebrate JazzTimes’ 50th anniversary, we made a bold (some would say foolhardy) call: the top 50 jazz albums of the past 50 … END_OF_DOCUMENT_TOKEN_TO_BE_REPLACED

In 2020, to celebrate JazzTimes’ 50th anniversary, we made a bold (some would say foolhardy) call: the top 50 jazz albums of the past 50 … END_OF_DOCUMENT_TOKEN_TO_BE_REPLACED