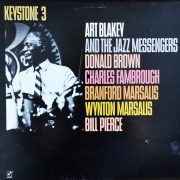 Wynton and Branford Marsalis both became the darlings of the jazz world while working in the Jazz Messengers, and Blakey at last became hailed as a legendary elder statesman. The energy that those three—along with tenor saxophonist Bill Pierce, pianist Donald Brown, and bassist Charles Fambrough—bring to “In Walked Bud” on this San Francisco live date (which ranks alongside Moanin’ and Free for All among Blakey’s finest recordings) is ferocious. The swing will make your head spin; the technique, despite Branford’s overreliance on Bird licks, is top-flight. But don’t be fooled by the youth surrounding him. Blakey’s constant push on the drum kit makes it clear that he is the primary generator of this heat.

This year marks the 50th anniversary of JazzTimes—and you can help us celebrate. We’re compiling a feature for our upcoming 50th-anniversary issue on the top … END_OF_DOCUMENT_TOKEN_TO_BE_REPLACED

“She was so out, and so in,” wrote pianist and JazzTimes columnist Ethan Iverson of Geri Allen. “In the mid-’80s, very few could say they … END_OF_DOCUMENT_TOKEN_TO_BE_REPLACED

This being the “Renegades” issue [May 2020], it’s an absolute given that you’d find William Hooker here. The prolific drummer, poet, and composer has gone … END_OF_DOCUMENT_TOKEN_TO_BE_REPLACED