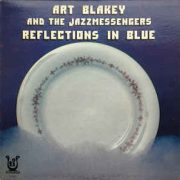 The late 1960s and much of the ’70s found the lineup of the Messengers at its most unstable (as was, all too often, Blakey himself). Though they still recorded regularly, most of that output is out of print. Reflections in Blue, however, finds that neither Blakey nor the band have lost a step. “E.T.A.” is a composition by 25-year-old alto saxophonist Bobby Watson—on the chords of Coltrane’s “Lazy Bird,” with rhythmic accents reminiscent of “Giant Steps”—and a high-octane triumph for tenor David Schnitter, trumpeter Valery Ponomarev, Watson himself, and pianist James Williams (one of Blakey’s secret weapons). Blakey and bassist Dennis Irwin are no slouches either, holding down some feverish swing that gives neither any quarter. Shortly afterward, Blakey would take on the Marsalis brothers and see his reputation (and his receipts) skyrocket, but it’s not because this preceding band was any less incendiary.

In 2020, to celebrate JazzTimes’ 50th anniversary, we made a bold (some would say foolhardy) call: the top 50 jazz albums of the past 50 … END_OF_DOCUMENT_TOKEN_TO_BE_REPLACED

In 2020, to celebrate JazzTimes’ 50th anniversary, we made a bold (some would say foolhardy) call: the top 50 jazz albums of the past 50 … END_OF_DOCUMENT_TOKEN_TO_BE_REPLACED