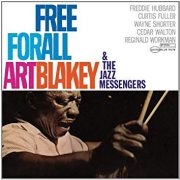 Even with all the jazz greats who passed through Blakey’s ranks, the 1963-64 lineup still boggles the mind: Wayne Shorter, Freddie Hubbard, Curtis Fuller, Cedar Walton, and Reggie Workman. Workman has said that Free for All was the younger, progressive-minded musicians’ attempt to force Blakey into grappling with the New Thing. It failed: Blakey remained Blakey. That said, the Shorter-composed title track does flirt with both modalism and free interplay. What really seals it, though, isn’t its cutting edge but its performance; not only do we hear all of the above musicians, we hear all of them firing on all thrusters. Blakey outdoes himself in his comps, spurring Shorter, Fuller, and Hubbard, respectively, to heights that are still startling 55 years later. Then, when the leader really lets loose, he does stuff that progressive drummers are still trying to catch up with today.

In 2020, to celebrate JazzTimes’ 50th anniversary, we made a bold (some would say foolhardy) call: the top 50 jazz albums of the past 50 … END_OF_DOCUMENT_TOKEN_TO_BE_REPLACED

In 2020, to celebrate JazzTimes’ 50th anniversary, we made a bold (some would say foolhardy) call: the top 50 jazz albums of the past 50 … END_OF_DOCUMENT_TOKEN_TO_BE_REPLACED