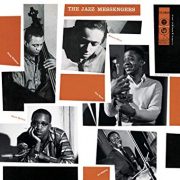 The premiere recording of Horace Silver’s standard is done by the Messengers in their first real incarnation: Blakey and Silver joined by tenor saxophonist Hank Mobley, trumpeter Donald Byrd, and bassist Doug Watkins, all at the beginning of highly accomplished careers (including Watkins, who would die six years later—but not before squeezing in nearly 400 recordings, two of them as a bandleader). It must be said that of the three soloists on this tune, Silver—then co-leader of the Messengers—is the star attraction. But it’s not because Mobley and Byrd do anything less than exemplary work, and the trumpeter’s rendering of the main melody is gorgeous in its own right. As for Blakey, his assured presence is a constant; during Mobley’s and Byrd’s solos, he’ll change the color and accenting of his ride cymbal beat in response to their phrases. “Nica’s Dream” is a bravura performance that establishes the Messengers’ artistic trajectory thenceforth.

In 2020, to celebrate JazzTimes’ 50th anniversary, we made a bold (some would say foolhardy) call: the top 50 jazz albums of the past 50 … END_OF_DOCUMENT_TOKEN_TO_BE_REPLACED

In 2020, to celebrate JazzTimes’ 50th anniversary, we made a bold (some would say foolhardy) call: the top 50 jazz albums of the past 50 … END_OF_DOCUMENT_TOKEN_TO_BE_REPLACED