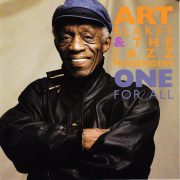 Recorded six months after his 70th birthday—and six months before his death—One for All finds Art Blakey as propulsive and hail-fellow-well-met as ever. He was leading an uncharacteristic two-tenor lineup, with Dale Barlow and Javon Jackson joining trumpeter Brian Lynch and trombonist Steve Davis on the front line, pianist Geoffrey Keezer and bassist Essiet Okon Essiet in the back. The tune is Keezer’s; the soloists are Keezer, Lynch, and Barlow; the performance is typically polished, energetic, and excellent. Which, ultimately, is the point. Blakey is still encouraging his musicians to express themselves, throwing kicks and prods in behind them while swinging as mightily as ever … but even with these individualists in the ranks, and the dozens of others that had formed the many versions of the Blakey band, the Jazz Messengers on their final recording still sound like the Messengers always sounded.

In 2020, to celebrate JazzTimes’ 50th anniversary, we made a bold (some would say foolhardy) call: the top 50 jazz albums of the past 50 … END_OF_DOCUMENT_TOKEN_TO_BE_REPLACED

In 2020, to celebrate JazzTimes’ 50th anniversary, we made a bold (some would say foolhardy) call: the top 50 jazz albums of the past 50 … END_OF_DOCUMENT_TOKEN_TO_BE_REPLACED