Arthur Blakey Senior—a.k.a. Abdullah ibn Buhaina, a.k.a. Bu, a.k.a. simply “Art Blakey”—would have turned 100 years old on October 11. It’s hard to overstate his impact on the jazz world. He was one of the most important drummers in history, with a raw, thunderous, cross-rhythmic style that is immediately distinct. He is even better known as a bandleader. For generations, his band the Jazz Messengers was the incubator of jazz talent, and to pass through its ranks was to attend the world’s most prestigious jazz university. (Blakey was never an educator in the formal, classroom sense, but in the de facto sense he is probably jazz’s foremost.)

This list contains 10 examples (in chronological order) of his unwavering hard-bop style, swinging tough and loaded to the gills with blues and soul. Each track was performed by a different lineup. Together they span five decades, but they all retain the character, energy, and above all the spirit of Art Blakey. 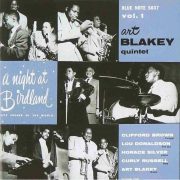 Not only is this date not the Messengers as we know them—it’s a summit of Blakey with his peers, rather than his protégés—it wasn’t even billed as such. The album is credited to the “Art Blakey Quintet,” and according to alto saxophonist Lou Donaldson that isn’t true either: Donaldson says the stint at Birdland was organized as “The Blue Note All-Stars,” and that Blakey co-opted it. Still, who can resist such an extraordinary assemblage: Blakey, Donaldson, trumpeter Clifford Brown, pianist Horace Silver, and bassist Curly Russell? Donaldson (heavily influenced by Charlie Parker but already leaning toward a new sound of his own) and Brown (sounding like Brown) give splendid solos, Silver and Blakey following with their own unique syncopations. Blakey begins the tune with another solo of sorts, telling the story of being with Dizzy Gillespie in Texas when he composed “A Night in Tunisia” “on the bottom of a garbage can. Seriously.” Gillespie said differently, but the story’s awfully good.

Ever since I was in the 7th grade, I have had a passion for jazz. I have always listened to and enjoyed a wide variety … END_OF_DOCUMENT_TOKEN_TO_BE_REPLACED

“My overall goal is trying to figure out how to connect the languages of jazz and classical to make an interesting and engaging performance, and … END_OF_DOCUMENT_TOKEN_TO_BE_REPLACED

We calculated our top 40 new releases of 2022 based on year-end lists by our writers. They were asked to choose the 10 best new … END_OF_DOCUMENT_TOKEN_TO_BE_REPLACED

We calculated our top 10 historical/reissue recordings of 2022 based on year-end lists by our writers. They were asked to choose the five best historical … END_OF_DOCUMENT_TOKEN_TO_BE_REPLACED