On Jan. 16, 1919, Nebraska became the 36th state to ratify the Eighteenth Amendment to the U.S. Constitution—Prohibition. One year and one day later, alcoholic beverages would become illegal to manufacture, transport, or sell in the United States.

We all know what happened next. The new law backfired spectacularly, encouraging people to drink, enriching the gangsters who supplied them, and setting up the 1920s to be a decade-long party. Jazz provided its uproarious soundtrack—it’s no coincidence that the period was called “The Jazz Age,” nor that the music’s success came hand-in-hand with a nationwide, if clandestine, alcoholic spree. Before, during, and after Prohibition, jazz and alcohol have usually been a pair, to the delight of some and the dismay of others. Here are 10 songs that drive home the point. 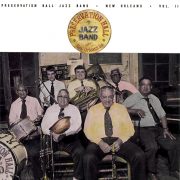 Most of the world knows this as a country-folk standard, made famous by Hank Williams in 1949. Rumor has it, however, that ur-jazzman Buddy Bolden wrote “The Bucket’s Got a Hole in It,” making it the primordial jazz-and-booze song. Whether it’s a Bolden original or not, “Bucket” comes out of the New Orleans musical tradition—Clarence Williams, the great early jazz and blues pianist/composer, copyrighted the song in 1933. Who better to interpret such a tune than the Preservation Hall Jazz Band? Their 1981 recording has a suitably woozy vibe in its front line (trumpeter Percy Humphrey, clarinetist Willie Humphrey, trombonist Frank Demond), with Allan Jaffe’s tuba bobbing merrily behind them. Percy Humphrey’s vocal, growling and slurred, is the capper. Perhaps this bucket’s already had plenty of beer.

Ever since I was in the 7th grade, I have had a passion for jazz. I have always listened to and enjoyed a wide variety … END_OF_DOCUMENT_TOKEN_TO_BE_REPLACED

“My overall goal is trying to figure out how to connect the languages of jazz and classical to make an interesting and engaging performance, and … END_OF_DOCUMENT_TOKEN_TO_BE_REPLACED

We calculated our top 40 new releases of 2022 based on year-end lists by our writers. They were asked to choose the 10 best new … END_OF_DOCUMENT_TOKEN_TO_BE_REPLACED

We calculated our top 10 historical/reissue recordings of 2022 based on year-end lists by our writers. They were asked to choose the five best historical … END_OF_DOCUMENT_TOKEN_TO_BE_REPLACED