Skip to content
Become a member and get exclusive access to articles, live sessions and more!
Start Your Free Trial
Home > Features > Five Brian Lynch Recordings You Need to Hear 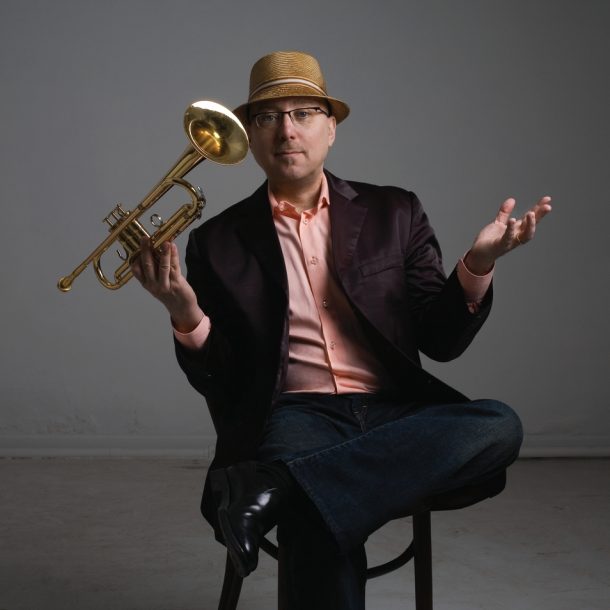 Lynch’s second solo album is among the most durable straightahead jazz albums of its era. The all-star personnel (Javon Jackson, David Hazeltine, Peter Washington, Lewis Nash) help make that so. But the real strength lies in the deliriously tuneful compositions, like the title track and “Blues for Cramer Street,” and in Lynch’s crystal-clear virtuosity and imagination on the horn.

ART BLAKEY AND HIS JAZZ MESSENGERS
Chippin’ In (Timeless, 1990)

Art Blakey clearly admired Lynch, judging from the latter’s prominence on Chippin’ In, the drum legend’s penultimate recording. Blakey named the album for a Lynch composition, one of three by the trumpeter to make the track list. Lynch also takes several bravura solos on the record, including two screaming choruses on “Love Walked In” that could collectively serve as a jazz-trumpet method book.

The down-and-dirty salsa flavor is so strong that when jazz elements come into play it’s a genuine surprise. But the fusion is remarkably comfortable-particularly with Lynch, who glides over the shifts in rhythm and phrasing with the ease of deep understanding. His in-the-pocket solo on “Slowvisor” and exchanges with saxophonist Donald Harrison on “Bouncer” are quicksilver and white-hot, and his ensemble work throughout is perfection.

A record that makes clear just what a misnomer “straightahead” can be. Hard bop, postbop, reggae, Latin and funk all mark the music (standards and originals) contained herein. Not even the personnel sit still, with two different rhythm sections featured and saxophonist Donald Harrison floating over top of both. The unifying factor, of course, is Brian Lynch, who makes all the pieces fit.

Among the finest Latin-jazz albums ever made, a completely organic and insoluble matrix. Lynch is a monster from the get-go, wailing his solo on the opening “The Palmieri Effect” and maintaining momentum through the valedictory “Freehands.” Even when he’s not soloing, though, Lynch’s DNA is all over the record: He wrote or co-wrote eight of the nine tracks, arranged all of them and serves as the project’s musical director. Simpático affirms his place at the top of the contemporary Latin-jazz pantheon.

In line with many resourceful jazz practitioners, Gilad Hekselman responded to the enforced isolation of the COVID-19 pandemic with a turning-lemons-to-lemonade attitude that ultimately eventuated … END_OF_DOCUMENT_TOKEN_TO_BE_REPLACED

It was the 1950s. Bebop had established itself as the new paradigm of jazz, but its newest popular variant, “cool jazz” or “West Coast jazz,” … END_OF_DOCUMENT_TOKEN_TO_BE_REPLACED

Session players have always been my thing. Not to take away from the singers or bandleaders or what have you, but I’m more interested in … END_OF_DOCUMENT_TOKEN_TO_BE_REPLACED

Walter Smith III has been burning the candle at both ends. As he connected with JazzTimes via Zoom from a New York City hotel room … END_OF_DOCUMENT_TOKEN_TO_BE_REPLACED