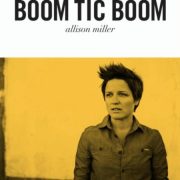 It doesn’t take a drummer to know that groove is front-and-center in jazz. It takes a composer of considerable acuity to make grooves as strong as Allison Miller’s are. The D.C. native brings the mid-Atlantic rhythmic feel to the soul-funk of “Big Lovely,” beginning with an indefatigable bass line (played by Todd Sickafoose) and reinforced by her drums before a blues-drenched piano (courtesy of Myra Melford) sounds off on the proceedings. The key to Miller’s grooves, though, is how they maintain cohesion. “Big Lovely” gives roots even to Melford’s considerable flights of fancy, so Miller can follow her—and then Sickafoose—into free territory without letting go of the pulse. It sounds easier to accomplish than it is.

We all know the big names of Blue Note Records—Coltrane, Rollins, Monk, Davis, Silver, Blakey, Hancock, Shorter, and so on—as well we should. But what … END_OF_DOCUMENT_TOKEN_TO_BE_REPLACED

Not only is Jackie McLean my musical hero, but in many ways he is my musical father. I met him as a senior in high … END_OF_DOCUMENT_TOKEN_TO_BE_REPLACED

During the Blue Note at Sea cruise in late January, Don Was, famed record producer and president of Blue Note Records, sat down with one … END_OF_DOCUMENT_TOKEN_TO_BE_REPLACED

The crisis is upon us. The music community is upended. Each of us reprioritizes what we do and re-navigates how we do it. David Gilmore, … END_OF_DOCUMENT_TOKEN_TO_BE_REPLACED