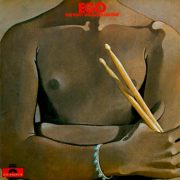 In jazz, to be a worthy composer can sometimes depend entirely on one’s willingness and ability to stretch a single riff or phrase as far as it will go. On “Circa 45,” Tony Williams stretches one into space. Guitarist Ted Dunbar and organist Khalid Yasin, a.k.a. Larry Young, quietly articulate an eight-note figure (with vibraphonist Don Alias and bassist Ron Carter sounding off in between repetitions), letting atmosphere reign before Dunbar’s extended solo. But that riff takes on a life of its own—a dark, mysterious, vaguely sinister life—and the composed responses by Alias and Carter only heighten the intrigue. Williams’ compositions in Lifetime often consisted of solo drum performances, but not because he lacked the ability to create something special.

Check the price of Ego on Reverb!