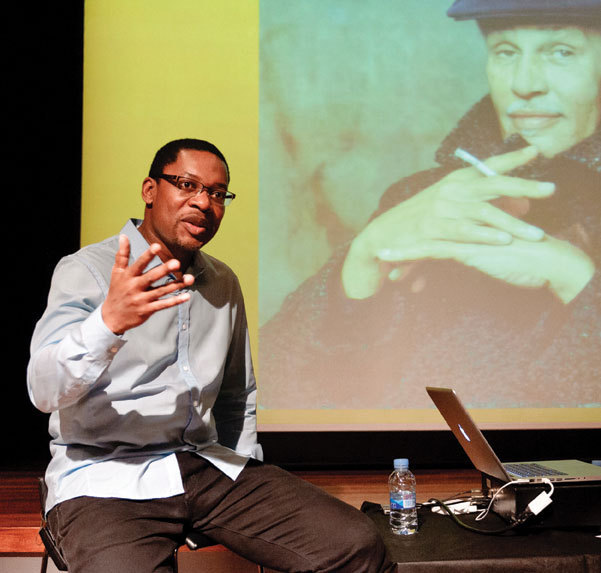 Ravi Coltrane participates in a JazzTimes Before & After session, 2014

Lately, Ravi Coltrane has been a man of constant change. In early 2012 he dismantled a longstanding quartet, and has since pulled together and performed with lineups that feature musicians of varying ages and styles. As of this writing, he seems to have settled on a limber, spark-filled quartet with pianist David Virelles, bassist Dezron Douglas and drummer Johnathan Blake. There’s a new, comfortable feel in his engagement with his rhythm section, and his playing on tenor and soprano sax has been favoring a wider range of phrasing and a more pliable sense of time. He’s also added the oboe-like sopranino to his onstage gear.

Coltrane, 48, has remained involved with other projects, notably Saxophone Summit, the all-star sextet drawing inspiration from his father John Coltrane’s later years, and including fellow reedmen Dave Liebman and Joe Lovano, pianist Phil Markowitz, bassist Cecil McBee and drummer Billy Hart. With that group, Ravi journeyed to Barcelona in October to perform a concert opening the 45th Voll-Damm International Jazz Festival. It was one of the most satisfying of their two-week European jaunt, according to many in the band. One excited Catalan journalist opened a laudatory review with a one-word exclamation-“Glorious!”-praising performances of newer compositions taken from the group’s soon-to-be-released ArtistShare album, Visitation.

Earlier that day, Coltrane participated in his first Before & After for JazzTimes, before a crowd of more than 40 in Barcelona’s SGAE facility, home of Spain’s writers’ union.

BEFORE: That’s an easy one. Just the opening sound of Thelonious Monk’s piano is like the sun rising-so clear. The saxophone was Johnny Griffin’s, who was regarded as one of the fastest tenors in the West, or the East, North, South, wherever. By his second or third phrase he was already doubling up his lines. He had incredible technique and was just one of those gunslinger saxophonists who could outplay almost anybody who got on the stage with him. Was the song “In Walked Bud”? It’s Art Blakey on drums of course.

I met Johnny at Catalina Bar & Grill in Hollywood when I was going to CalArts-Kenny Washington introduced us, and Mr. Griffin was so very, very kind. Of course he was a contemporary of my father’s-they were on a Blue Note record together with Hank Mobley, called A Blowin’ Session, which kind of showed how the saxophone battle really isn’t a battle: It’s about “We’re all in this together; let’s do this, have some fun, hear my ideas and let’s hear your ideas.” He had many kind things to say about John.

I love almost all of the tenor saxophone players and spent time trying to transcribe their solos, but the only time I had to stop was with a Johnny Griffin track-it was just too difficult. His lines are unconventionally shaped. Generally there’s an eight-notes-per-measure standard to bebop or postbop playing. Sometimes Johnny will have anywhere from seven-and-a-half to 10 notes, or something like that. His style is very personal. It’s his own approach in addition to his ability to play very rapidly.

BEFORE: Dexter Gordon-I’m not guessing [laughs]. The piece is from the film Round Midnight, which I just watched again recently. I don’t know the name of this tune, but I do remember they end up playing this later in the film, when Dexter makes it back to New York. On trumpet I think it’s Freddie … no? OK, Palle Mikkelborg. Dexter’s brilliant in the film. A lot of people say he was playing himself. For a non-actor that’s probably the best course of action. It’s also a treat to see all the other musicians who acted in that film.

Dexter’s one of our greatest tenor saxophonists, but to hear him play soprano is something special. His voice carries through from one instrument to another, and his lyricism on soprano is something very unique. I transcribed many Dexter solos when I was in school, and he was the real first modern tenor saxophone player who influenced every saxophone player after him, including my father. You hear lots of Dexter in early John Coltrane recordings. What’s really interesting is that at some point Dexter becomes a fan of John and his playing starts being influenced by John’s-like when Dexter plays “Body and Soul,” he uses the changes on that tune from Coltrane’s Atlantic period.

BEFORE: Incredible performance. I went through a couple of different players in my mind. I thought it was John Gilmore at first, then I wanted to say Charles Lloyd, but I know it’s not Charles. It sounds like a band. Their interplay and just their unity, it doesn’t sound like just something that’s happening for the first time. I would say it’s from the late ’60s, early ’70s. ’77? Holy smokes-well, it’s definitely not Charles Lloyd then.

AFTER: That did not sound like Michael, but there was one Brecker thing in there so I should have gotten that. I met Michael in the early ’90s, right when I got to New York, and saw him perform many times. He was incredibly kind and very generous and one of the greatest instrumentalists that ever dealt with the tenor saxophone. There’s no getting around the fact that he put countless hours into that instrument and was able to take it places that most players couldn’t.

On piano, I recognized the left hand coming out of McCoy [Tyner] and so eliminated Keith [Jarrett] and Chick [Corea]. Joanne is one of the strongest players, especially in the left hand. The influence of McCoy is very heavy. She’s one of the few piano players who took that language and moved it in her own direction for her own purposes. An incredible improviser and very, very, very personal, all of that going into her expression with a lot of strength and grace-an incredibly fearless musician. I should have known it was her-I hope she doesn’t read this! Obviously that was one of her compositions.

I worked with Joanne a lot through the ’90s and 2000s. I got a lot from her approach: how she can filter ideas from the air and channel them into her improvisations. Sometimes it’s hard to get onstage and just be yourself, but she helped me learn to do that. I still do some things with her occasionally. Did you dub this yourself? [laughs] I heard the needle hit the vinyl-definitely not downloaded from iTunes.

I try to hide all the work that goes into these things. You said it sounded like a band. Cecil McBee was on bass and Billy Hart on drums, both of whom you’ll be performing with tonight.

I’d like to hear something else from this record. I wanted to say Jack on drums, which was why I was thinking Charles Lloyd, but then I knew it wasn’t Jack.

BEFORE: That’s Jay Leno. [to audience] Do you guys have the great fortune of knowing who he is? An American TV talk show host who was somewhat hip when he started out in the ’80s, and then got his own show. So that must be Branford, who was Leno’s musical director-the bandleader on the show. This was Buckshot LeFonque in ’94 or ’95? Wow, this is almost 20 years old.

I was a big Branford fan when I was in school, and he was a big influence on me in the ’80s. If you look back through his discography there are a lot of great moments. This music came out at a time when everybody was so excited about these new hybrids of jazz and hip-hop and where that was going. It’s hard to say where ultimately this all led to, but as musicians we’re supposed to try new things and take chances. In the early ’90s, there were times when it felt incredibly organic and right in the moment.

With each generation there’s that opportunity for a new kind of authentic fusion to happen. For people who grew up listening to hip-hop and then later got into jazz, they’re going to have another take on this than somebody who comes from a jazz background and then later tries to incorporate a new style that comes along. There are other examples of people putting these styles together that are more successful than this-I’m sure Branford would tell you something very similar. Sometimes these fusions reshape everything afterwards, and other times it’s people putting things together and then moving on to other stuff.

“Choose Your Own” (Lord, Lord, Am I Ever Gonna Know?, Candid). Thompson, soprano and tenor saxophone. Recorded in 1961.

BEFORE: Lucky Thompson. It’s like when you know the sound of a person’s voice you just recognize it. I had to come to New York to find out that Lucky played soprano and that his playing was completely unique. You usually don’t hear him playing it until later, in the late ’60s or after. This sounds like late ’50s, early ’60s. I was thinking Steve Lacy in the beginning but quickly I knew it wasn’t him-Lacy was a little more modern. After Sidney Bechet and until John [Coltrane] and “My Favorite Things,” there weren’t that many soprano players. Lacy and Lucky were two of the very few. That’s the other thing that gave it away: the post-John Coltrane soprano approach is more lyrical and loping and a swooping type of thing, but Lucky’s playing bebop on this one.

Nowadays, if you play the tenor saxophone then it means you also play the soprano. Both instruments are in the key of B-flat, so it’s a quick transition-like Lucky did on that track. They must have spliced that because I didn’t hear him putting down the soprano and picking up the tenor. I haven’t heard him playing soprano since the ’90s. I need this record.

BEFORE: “Here’s That Rainy Day.” It sounds like it was recorded in the late ’60s to mid-’70s, and it sounds like an older player who’s playing in a more modern style. I was going to say Gene Ammons, but now I don’t think it’s Gene. I’m focusing just on the tenor for now. Let me hear some more.

AFTER: Well, if I didn’t hear that was Elvin, there must be something wrong with my ears.

Well, he was playing brushes.

I appreciate that, but still. … There are a few holes in my tenor saxophone world and Frank unfortunately is in one of them. I’ve always appreciated his playing, and he’s a beautiful, beautiful player. I need to put this record back on-it’s been a while.

I will say this: If it wasn’t for Elvin I would most likely not be sitting here. Elvin was the first person to take me under his wing after I left school and I was not ready to play on a level with those players. I tried to express that to Elvin when he called to ask me to be in his group. He said, “Don’t worry about it.” He wanted to get me out there and push me a little bit. I worked with him for two years between ’91 and ’93-one of the greatest and most frightening experiences in my life. An incredible man, unlike anyone at all.

When I started listening to jazz, as a kid growing up in rural Ohio, I got pretty lucky choosing my first few records. A Dizzy … END_OF_DOCUMENT_TOKEN_TO_BE_REPLACED

A few weeks before the release of Connect, Charles Tolliver’s first new recording in 13 years, the trumpeter and composer is home in New York … END_OF_DOCUMENT_TOKEN_TO_BE_REPLACED

You are reading the words of an Andrew Hill fanatic. The kind who has spent years poring over his music, track by track. And why … END_OF_DOCUMENT_TOKEN_TO_BE_REPLACED