Skip to content
Become a member and get exclusive access to articles, live sessions and more!
Start Your Free Trial
Home > Features > Before & After with Tim Lefebvre 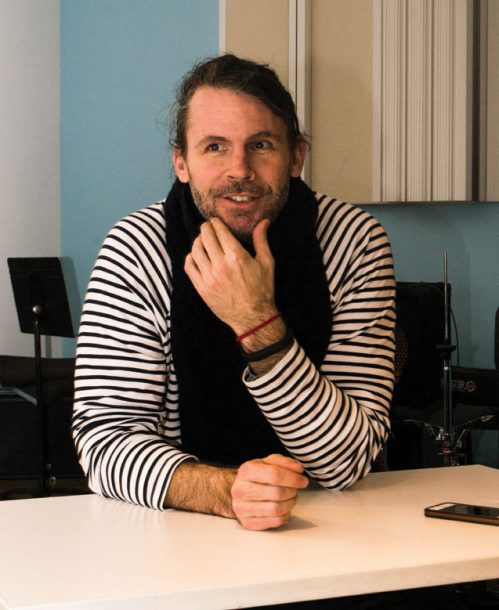 Friendly and eager and always smiling, Tim Lefebvre has an energy that seems to arrive before he enters the room. It’s an energy one can’t miss hearing in his conversation or his playing. Originally from southeastern Massachusetts, the electric and acoustic bassist was in his 20s when he moved to New York City in 1993. There, he began working with an increasingly large circle of musicians, including jazz players like guitarist Wayne Krantz, keyboardist Uri Caine, drummer Mark Guiliana and saxophonist David Binney and such pop headliners as Elvis Costello, Sting, Patti Austin, John Mayer, Bette Midler, Donald Fagen and trumpeter Chris Botti. Lefebvre (pronounced “leh-FAVE”) relocated to Los Angeles in 2011 to pursue production and soundtrack opportunities while still playing and recording with a wide range of musicians-Donny McCaslin, Knower and Emmy Rossum, to name a few.

Just this past fall, he agreed to pull out the bass case and hit the road with the Tedeschi Trucks Band, one of today’s premier blues/roots acts. “It says a lot about the spirit in that group that I’d get back on the bus to tour,” Lefebvre laughed. “Working with Derek [Trucks] and Susan [Tedeschi] is just great, a real family vibe.”

Lefebvre’s first Before & After for JazzTimes took place at New York University’s jazz facility. Though Lefebvre mentioned that he never attended a music school, he had an instructor’s instinct, directly addressing the 20 or so students when he felt he had a point they shouldn’t miss. Lefebvre is stylistically diverse in both experience and taste, but if he’s known for one area of musical expertise, it’s the three-way intersection of jazz, rock and funk. He has a historical knowledge of studio work as well, so choosing the tunes for this exercise held its own delight.

BEFORE: That was wonderfully weird. Maybe that was [guitarist] Adrian Belew. The bass player is great, whoever that is-killing pick-playing. I actually like that tempo; it’s very punky. It’s teetering on the edge of chaos, but the bass is really holding it down-it’s pretty awesome. It’s definitely from the ’80s, but that’s not a programmed drum machine. That’s somebody playing that. It’s just hilarious; it’s great.

AFTER: I would never have guessed Anthony Jackson. His tone was definitely thinner then. I don’t think I ever heard him play a [Fender] Jazz bass-that’s a Jazz bass for sure. That was an amazing bassline-my God, ridiculous. I like bass parts like that, semi-complex. That’s some really heavy stuff that’s going on there.

Anthony is just amazing to watch, and to hear the guy stretch is insane. He just does his own thing. Sometimes you can still go see him at [NYC’s] the 55 Bar, which is crazy, sitting just 10 feet from the guy and watching him rage. He played some with Wayne Krantz before I did. I think Anthony and [drummers] Ari Hoenig and Dennis Chambers were his first victims [laughs].

[turns to audience] I don’t know if you guys have recorded on a project when you solo after the other tracks have been done, but I hear [Anthony] can get really meticulous about that stuff in the studio-he’s kind of legendary for it. I mean, Steely Dan are known for being the most nitpicky guys in the world and Anthony would stay after they had left: He’d out-Steely-Dan Steely Dan! If you heard his track by itself you could use it as a click track-the guy is a machine. One of my favorite recordings is [keyboardist] Jim Beard’s first record, Song of the Sun, from 1991. To me it captures some of the best Michael Brecker I’ve heard and the best Anthony, all on the same track, “Bakers Annex.” Anthony is playing some insane shit-muted stuff and a tricky bassline and he’s adding stuff in between. Then there’s Anthony’s playing on Steely Dan’s “Glamour Profession,” which is the tour de force of pop bass playing.

BEFORE: I’m probably wrong but I think I have an idea. That’s funky as hell, that’s all I know. [On bass] it sounds like Jerry Jemmott or Willie Weeks or one of those guys. There’s a sharpness in the tone; it’s really clear, like Jemmott and Weeks were on record. James Jamerson was a little more muddy because I think they miked his amp a little close. I could be wrong, but there were so many good tracks from that era.

AFTER: It is James? Wow! Who’s on drums? I’m woefully uninformed about some of that stuff. Was that applause at the start?

That’s hilarious. But it’s a great track-everybody was playing super relaxed, just how they did it back then when people could really play. Go plug in and just play. It may be a blues, but that bassline is so distinctive and it sits with the drums really well, plus the percussionist too. It kind of reminded me of Aretha Franklin’s band a little-King Curtis’, I should say-except I knew it wasn’t quite [drummer Bernard] Purdie. Like I said, there’s so much of that stuff I have to catch up on. James was so good.

When I was a kid I didn’t appreciate that old ’70s sound. It was playing at me from AM radio and I just didn’t get it yet. When I started listening to bass players, I heard that the guys I really liked, like Darryl Jones and Victor Bailey, were all into James Jamerson. I started paying attention to him and went back to all that Motown stuff and checked it out. Then I learned that older R&B guys like Jemmott and Chuck Rainey, Louis Satterfield, Ronnie Baker and all those guys who were crazy good, they all came out of Jamerson’s thing. Even Bootsy Collins a little bit.

BEFORE: That’s Matt Garrison. I don’t know this track but I know Matt’s playing pretty well and that’s Arto Tunçboyaciyan, whom I’ve done a lot of gigs with over the years. Matt’s the originator of that style of the Fodera five-string, solo-istic stuff. You just cannot mess with his harmonic sense. I like his writing too-a lot of it is simple like this track; it’s 10ths and just moves around a lot of chords you’re familiar with, and then he does that really slick blowing in between. Also, in L.A. I play with [keyboardist-composer] Scott Kinsey a lot [one of Garrison’s bandmates in Human Element] and they’re all coming from that Weather Report-y zone.

Yeah, that kind of vibe. That line of bassists who came out of Weather Report is just amazing. They can rip at speeds and with more chops than I’ll ever be able to. They play some intervallic stuff that is just so slick. I had a band called Boomish, and we were on the same label as [Weather Report’s Joe Zawinul] when he had his own band, so we got to play a few festivals with him. I saw the group when Victor Bailey had come back, and Manolo [Badrena] and Amit [Chatterjee] were with him too.

Amit’s on this track too.

Just amazing. Matt’s been stunning for years. Is this his newest record?

AFTER: OK, 2000-first album. Nice. I got to hear Matt when I first moved to New York, and I knew he was amazing. He lived around the corner from me in Brooklyn and we got to be good friends. He’s awesome, and his dad [Jimmy Garrison] obviously was very special. Matt’s so strongly into his own thing, like running ShapeShifter [Lab], his club in Brooklyn. [to audience] It’s worth the trip in case you haven’t gone there. I think Matt’s booking some of the best, most creative stuff and just keeping it alive. I hope that is doing well for him because it’s invaluable. From here it’s easy to get to-just hop on the R train.

BEFORE: That’s the ’90s for sure. Maybe it’s the ’80s-a bunch of reverb on the drums and the keyboard sound, and that’s definitely a [Yamaha] DX7 synth. I have no idea who it is but it’s a well-planned-out composition; the bass is totally with the bass drum and the vamps are thought out. It’s cool but it’s that era. The alto player wasn’t too Sanborn-y. I love Sanborn, but he influenced so many guys who’ve gone in another direction that he didn’t intend.

AFTER: Is it Lincoln Goines’ record? Oh, Paquito. I’m not familiar with him too much-I should be a little more. Lincoln on electric-nice.

Actually, Lincoln was a big influence on me because he had the Wayne Krantz gig before I did, so I really checked him out to know how he was approaching that stuff. Wayne’s charts could be like 50 pages long-seriously, when I first started playing there were like 10-page charts with triple codas. [laughs]

I had to learn a lot of stuff, but there were sections notated with slash marks, which kind of meant, “Do your own thing.” I checked out how Lincoln handled it, which was really, really hip. If there was a section that repeated four times, he would play around what was written the first three times and then the fourth time through he would play the written line exactly. That’s how some of that music evolved at the 55 Bar-I don’t think Wayne knew it was going to be that cool when he wrote it. When I started hearing Lincoln taking liberties with the music, it was very informative and helped me negotiate it. I stole a lot from Lincoln when I started the gig.

BEFORE: That’s great. Super soulful. Is that a standard? It sounds vaguely familiar. [to audience] Does anybody know? OK, Neal Hefti. Man, whoever that was just sat there and played the whole tune all up high on the neck and didn’t play anything flashy. I love the vibe of that-super clear tone. I love it especially because he’s not shredding, he’s just playing the melody with just a little blowing over it. Who is that?

AFTER: Monk did a solo record?

Actually, he did a few-for Motown and Philadelphia International.

So I guess he’s one of the first guys doing that on electric bass-playing melodies up high and doing jazz material. That was great. Dare I say that might be my favorite track so far? Such a strong vibe. I’d like to be able to play that way. You know, traveling with Derek and Susan and the band, it’s really a competition on that bus-who’s got the hippest [music] to play for everyone else. I’ll absolutely be playing this for them. [takes photo of album cover with iPhone] I got some more ammo now. Thanks, bro!

In line with many resourceful jazz practitioners, Gilad Hekselman responded to the enforced isolation of the COVID-19 pandemic with a turning-lemons-to-lemonade attitude that ultimately eventuated … END_OF_DOCUMENT_TOKEN_TO_BE_REPLACED

It was the 1950s. Bebop had established itself as the new paradigm of jazz, but its newest popular variant, “cool jazz” or “West Coast jazz,” … END_OF_DOCUMENT_TOKEN_TO_BE_REPLACED

Session players have always been my thing. Not to take away from the singers or bandleaders or what have you, but I’m more interested in … END_OF_DOCUMENT_TOKEN_TO_BE_REPLACED

Walter Smith III has been burning the candle at both ends. As he connected with JazzTimes via Zoom from a New York City hotel room … END_OF_DOCUMENT_TOKEN_TO_BE_REPLACED