Skip to content
Become a member and get exclusive access to articles, live sessions and more!
Start Your Free Trial
Home > Features > Before & After With Snarky Puppy’s Michael League 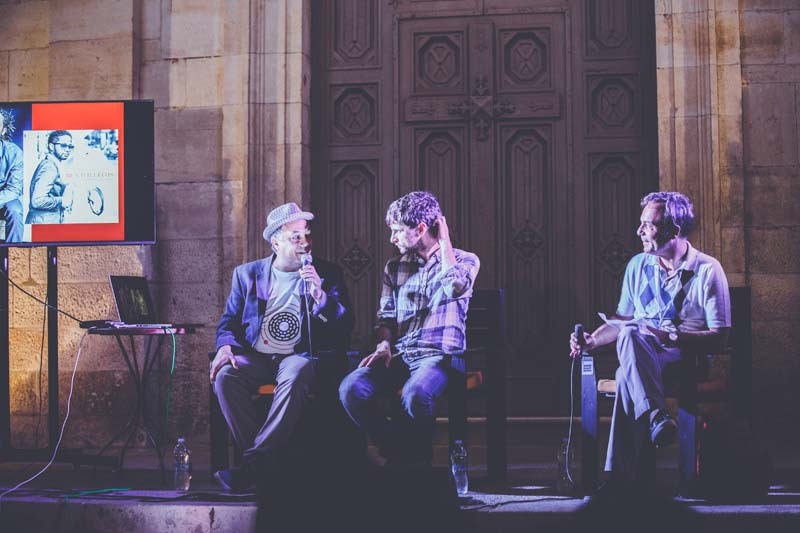 From left: JT's Ashley Kahn, Snarky Puppy's Michael League and A.MA Records' Antonio Martino, who translated for the crowd, at the Locus Festival in Puglia, Italy 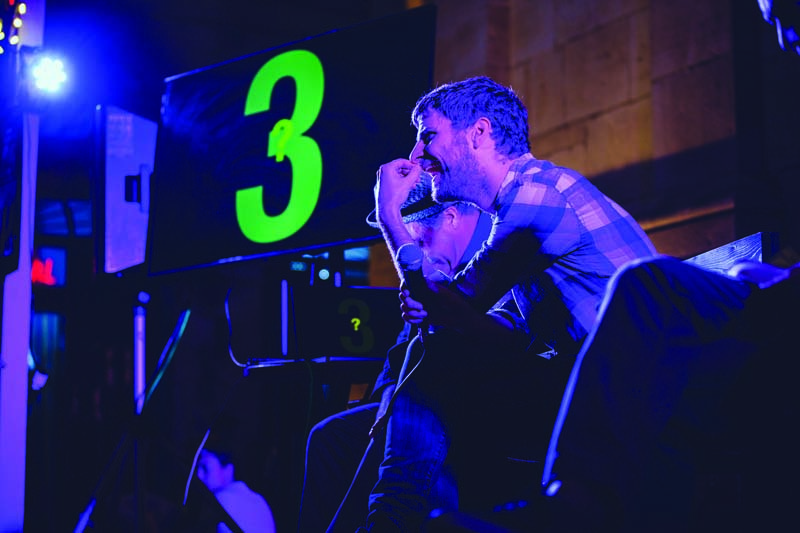 Catching up with Snarky Puppy’s leader, bassist Michael League, is not easy these days, especially during the European summer festival season. The challenge is a result of the group’s increasing popularity: Between June and the start of September their tour took them through a dozen countries, performing almost 30 shows. In just a few years, the Brooklyn-based ensemble has become a major headliner at festivals focusing on jazz, R&B, rock and other musical styles, supported by a growing reputation for delivering high-energy performances that bring the fun and funk, and draw generation-bridging crowds. At this career point, they are as busy as they want to be.

Coordinating a live Before & After with League-his first for JazzTimes-before a concert in Italy was complicated further by problems peculiar to this past summer: numerous travel troubles brought on by strikes and extreme weather, and tragic acts of terror that ultimately cancelled festivals in Nice and Istanbul. Nonetheless, on July 24 Snarky Puppy arrived midday in Locorotondo-a well-preserved, blindingly white hilltop town in Puglia, Italy (“the heel of the boot,” as they call it). They were there to perform as part of the Locus Festival, a day after the fest hosted a rousing show by DJ Premier and his group the Badder, featuring trumpeter Takuya Kuroda.

Despite a late-night set in Milan the prior evening, a delayed air connection and little sleep, League, 32, completed sound check and a short rehearsal with guest vocalist Laura Mvula before sitting down for this exercise in a small piazza, where he listened to and commented on 10 tracks for an audience of nearly 100 music fans.

BEFORE: I have no idea. Off to a great start. [laughs] It’s obviously a great modern fretless bass player. Can you give me a hint? Is he normally an electric bass player, or does he play upright as well? Does he play with Pat Metheny? I think it’s Ben Williams. I feel like I’m on a game show.

AFTER: I think it’s a very hard thing for bass players to be leaders, because normally we play very low, very supportive things, and being melodic, stepping out from the normal bass player role, is a difficult thing to do. Hearing Ben do that, and the way he’s playing the melody, is really beautiful. That’s the thing that struck me first.

I know Ben, he’s a friend of mine, so I’m super embarrassed that I didn’t know it was him right away. He’s a beautiful musician and a great dude. It’s nice to hear him playing electric-I almost never hear him playing that way.

BEFORE: Paul Simon, of course. The only bass player I know who plays with him consistently is Bakithi Kumalo, but I don’t know if he plays upright and that’s an upright bass player. Hmm … is that a jazz player? He has a humongous sound and is super percussive. I like this. Is this off the new Paul Simon record?

AFTER: Cool. Carlos is amazing. I didn’t know he was on that. I think playing pop music and playing jazz are very different things. A lot of the time jazz musicians assume that because they can play jazz they can easily play pop, and I think a lot of the time pop musicians are kind of scared of playing jazz. But I think they’re both very specific skills that you have to learn. It’s like making Italian food or making Greek food-it’s all Mediterranean, but they’re super different. You have to really learn those specific skills, so it’s cool when you hear a great jazz player playing very, very well on a pop record.

I think the biggest problem that jazz players have in pop contexts is not wanting to repeat themselves. We’re not accustomed to always playing the same things over and over again, and for pop music-or when you’re supporting a singer-it’s a really important thing to be able to groove and play it over and over again, and to be supportive. To me, that’s the main role of the bass: to support whatever is happening in front of you, whether it’s a trumpet or a saxophone or a singer.

BEFORE: I don’t know this one.

AFTER: Oh, really? Dave’s my biggest influence on double bass. I thought I had heard everything he’s done. This is [a recent album], right? Prism? I like Dave’s bass playing because he has a lot of groove and a lot of swing, a beautiful sound and he’s subtle. That’s the thing that really draws me to him.

I was just feeling like it’s not Dave Holland because I’ve heard most of his albums. When I went to college, Dave was the bass player I listened to most-Dave and Ray Brown. They were the two bass players I spent the most time checking out and transcribing.

BEFORE: When it first came on it reminded me of the Meters, and that sounded like George [Porter Jr.], but it’s not the Meters. [listens more] The keyboard player sounds like the teacher of my teacher: My mentor was [keyboardist] Bernard Wright, from New York City, and his teacher was Weldon Irvine. I still don’t know exactly. But that must be Weldon-it’s his phrasing. So the thing that they all have in common-my teacher Bernard Wright and Weldon Irvine and others-is the way they phrase in their playing: sharp. And there’s the sound of the electric keyboard from that time. It’s so strong. And I love the sound of the bass player. I’m going to take a guess at one of the Jamaica, Queens, bassists and say that it’s Barry Johnson?

AFTER: Gordon Edwards from Stuff? Wow, I gotta do some homework. I think the approach Snarky Puppy takes is actually more based on this style of music than the electric fusion stuff people think of us as being associated with. The marriage of funk/R&B and jazz vocabulary is where our sound comes from originally.

BEFORE: Wow. How recent is this? It has a lot of influences, from Radiohead and indie-rock stuff to other styles. It’s really raw, which is very cool and kind of reckless. I can’t hear the bass part very well through this speaker; it’s hard to hear, but it felt pretty dissonant and very low. Super low. It’s electric bass, but is it a jazz player or a pop player? What’s the lyric, “Lotus and the Jondy”? That must be about DJ Flying Lotus, from Brainfeeder in L.A., and so the bass player would probably be Thundercat. I think it’s cool how they’re taking a style that’s normally very rigid and there’s a lot of motion happening, which is not normal.

AFTER: There’s a scene that’s been developing in Los Angeles over the last few years, and Flying Lotus, Kendrick Lamar, Kamasi Washington and Thundercat are all very much a part of it. I think what they’re doing is very important, because they’re taking music that’s popular, like hip-hop, and connecting it with the tradition of jazz to keep it relevant for people today.

BEFORE: [immediately] James Brown-“It’s a Man’s World,” one of my favorite songs but a different arrangement from any I’ve ever heard. The two bass players that I’m most familiar with, who were in James’ band, are Charles Sherrell and Bootsy Collins. But this is not either. The bass player is moving around like a jazz bass player and playing electric bass! It sounds great. Hint?

You actually mentioned him already.

AFTER: [looks at image onscreen of Ray Brown holding Fender bass] Oh, my God, is that Ray Brown? Holy shit. Ray Brown did a record with James Brown? Amazing. I’m buying that one. You gotta give me a list of all these songs so I can go buy them.

For our 2020 Year in Review section, we calculated the top 40 new releases and top 10 historical/reissue recordings of 2020 based on year-end lists … END_OF_DOCUMENT_TOKEN_TO_BE_REPLACED

For our 2020 Year in Review section, we calculated the top 40 new jazz releases and top 10 historical/reissue recordings of 2020 based on year-end … END_OF_DOCUMENT_TOKEN_TO_BE_REPLACED

For our 2020 Year in Review section, we calculated the top 40 new jazz releases and top 10 historical/reissue recordings of 2020 based on year-end … END_OF_DOCUMENT_TOKEN_TO_BE_REPLACED

For our 2020 Year in Review section, we calculated the top 40 new jazz releases and top 10 historical/reissue recordings of 2020 based on year-end … END_OF_DOCUMENT_TOKEN_TO_BE_REPLACED