Skip to content
Become a member and get exclusive access to articles, live sessions and more!
Start Your Free Trial
Home > Features > Before & After with Rudresh Mahanthappa 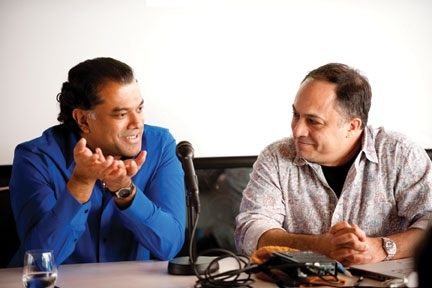 Talking music with Rudresh Mahanthappa can be both fun and feisty-or, more accurately, it is fun because of the feistiness. Place that boisterous conversation in the sleekly modern interior of Monvinic, Barcelona’s leading wine-focused restaurant, during the height of that city’s world-class jazz festival (Oct. 29 to be exact) and one has the ingredients for a spirited and satisfying event on many levels.

Our Before & After session took place before a gathering of Catalan jazz fans in one of the restaurant’s private dining rooms. Mahanthappa had just arrived to play the penultimate date of a brief European tour with his quartet Samdhi. Later that evening, with guitarist David Gilmore, electric bassist Rich Brown and drummer Damion Reid, Mahanthappa performed a powerful set of new compositions flavored with echoes of 1970s fusion and modern-sounding effects and loops triggered on his laptop.

Gregory Porter got a late start as a recording musician, but that was because he was busy flexing his chops on a culinary stage. His … END_OF_DOCUMENT_TOKEN_TO_BE_REPLACED

The sound that Horace Silver pioneered in the ’50s and ’60s—for a while, all but synonymous with the sound of Blue Note Records—is for many … END_OF_DOCUMENT_TOKEN_TO_BE_REPLACED

If you want to find out how good your sound system is, the worst way to do it is to play your favorite jazz albums. … END_OF_DOCUMENT_TOKEN_TO_BE_REPLACED

For our 2020 Year in Review section, we calculated the top 40 new releases and top 10 historical/reissue recordings of 2020 based on year-end lists … END_OF_DOCUMENT_TOKEN_TO_BE_REPLACED