Skip to content
Become a member and get exclusive access to articles, live sessions and more!
Start Your Free Trial
Home > Features > Before & After with New York Voices 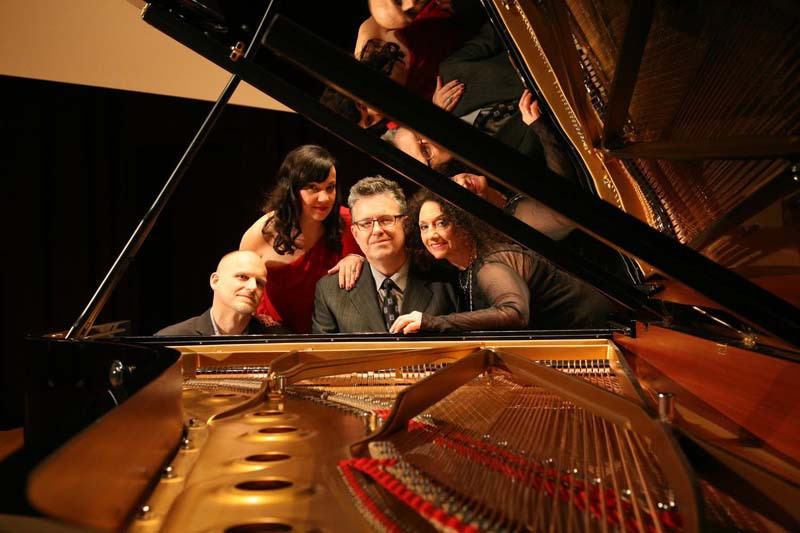 For as long as they’ve been singing, the Voices have, both individually and collectively, maintained parallel careers as music educators, presenting and participating in workshops and adjudicating jazz programs across North America and Europe. In 2009, Nazarian’s dream of establishing the group’s own vocal program was realized with the establishment of the New York Voices Vocal Jazz Camp, presented each summer on the campus of Bowling Green State University in Ohio. This past August, the camp celebrated its sixth year with the highest registration to date, a total of 77 campers and auditors, ranging from teens to octogenarians, including participants from as far away as Portugal and Japan. Toward the end of the weeklong session, the camp’s entire student body gathered inside a BGSU auditorium to watch the Voices participate in their first Before & After for JazzTimes.

BEFORE
Darmon Meader: I think we’re officially stumped on this. We’re shooting around it. It sounds like a tenor-y version of Lou Rawls or Joe Williams. We’re not finding it.

Lauren Kinhan: Is it a piano player who’s accompanying himself?

AFTER
Kim Nazarian: Wow! We were wondering if the piano player was the singer because the piano was so prevalent in that recording. Beautiful. I was engaged from the very beginning, from the first lick.

Peter Eldridge: There’s an instrumental reedy sound from the vocalist [and] a great sense of space in his performance.

Meader: It’s very conversational but super present. It’s a really powerful voice. Peter and I, in our teaching, continue to compile lists for our students to expand beyond the top 20 vocalists that everybody knows, and we now have a new one to add.

2. The Double Six of Paris

“A Night in Tunisia” (from Swingin’ Singin’!, Philips).

BEFORE
Meader: It’s the Double Six of Paris. It’s so interesting when they’re doing vocalese, because it’s in French and I don’t speak French,

so it ends up feeling like a scat solo.

Kinhan: That’s what I was struck by. Everybody sounded like an instrument, and it felt so connected to the instrumental world.

Nazarian: From the first hit, it’s so magical, and you want to hear the rest of it.

Eldridge: And it’s super even; the voices are so even from top to bottom.

Meader: Is it based on a specific recording by an instrumentalist? Our guess was [the tune’s co-composer] Dizzy Gillespie, but that doesn’t sound like a Dizzy recording we know.

On Swingin’ Singin’! this track is dedicated to trombonist J.J. Johnson, and based on his 1956 arrangement of “A Night in Tunisia” for Jay and Kai + 6.

“The Lady’s in Love With You” (from Why Fight the Feeling? Songs by Frank Loesser, Arbors). Kilgore, vocals; Frishberg, piano. Recorded in 2008.

BEFORE
Meader: [the four Voices huddle and compare notes] We’re doing a good job of guessing everyone it’s not.

Nazarian: Is the pianist Randy Porter?

AFTER
Kinhan: [Kilgore and Frishberg] are one and the same. He’s grooving, and they’re swinging so hard. And they’re so tasty.

Nazarian: For me it’s a taste of history. You hear that stride piano. They’ve done their homework.

Meader: She has such great placement. It feels very relaxed and not over-sung, but everything is absolutely accurate. It’s just so there.

“How About You” (from Ring Around Rosie, Columbia). Clooney and the Hi-Lo’s (Clark Burroughs, Bob Morse, Gene Puerling, Bob Strasen), vocals; with orchestra under the direction of Frank Comstock. Recorded in 1957.

BEFORE
Eldridge: We know this one. It’s Rosemary Clooney and the Hi-Lo’s. I know Rosemary Clooney is regarded as one of the great singers, but I still don’t think she’s well known enough. There’s so much heart in that sound. She’s swinging, and makes it sound easier than it is. And I just love her on top of their sound. It’s so rockin’ great.

Kinhan: She’s one of those singers that really help you hear the lyric. She’s a master at it.

Meader: The Hi-Lo’s walk back and forth between this hilarious line of being super hip and super campy. It’s so entertaining to hear them bounce back and forth. And their sound is so happy.

Kinhan: I like the way that they’re really committed. They’re on point with everything they’re doing. There’s so much thought put into every detail of that chart. Nothing is phoned in.

BEFORE
Meader: I’m sure I’m going to know as soon as you say the name.

AFTER
Nazarian: Oh my gosh, I just saw him! The band is so happening. The instrumental stuff is, for me, as much ear candy as the vocalist. I just wanted to keep hearing their solos.

Kinhan: I like the way he articulated the lyric with the triplet. I love the humanity in it, too. It wasn’t perfect, thank goodness; snore city, if everything’s perfection. It felt easy and swingin’ and right.

Meader: It’s interesting to hear a voice, especially of that range, lay into a guitar accompaniment rather than piano.

Eldridge: A male vocalist sits right in the bed of the piano. You’re sitting in the belly of the beast. But guitar is wonderfully transparent, and organ too.

BEFORE
Eldridge: It sounds like a hybrid of Dee Dee Bridgewater and Dianne Reeves.

Meader: Is it Dee Daniels?

AFTER
Eldridge: I loved the fadeout. There were so many great things she was doing. The ending was really strong.

Nazarian: I love the arrangement. And I love the contrast of what’s going on in the band with the lyric, but she still maintains the line, and her chops are flawless, her ears are incredible. She’s a force to be reckoned with.

In line with many resourceful jazz practitioners, Gilad Hekselman responded to the enforced isolation of the COVID-19 pandemic with a turning-lemons-to-lemonade attitude that ultimately eventuated … END_OF_DOCUMENT_TOKEN_TO_BE_REPLACED

It was the 1950s. Bebop had established itself as the new paradigm of jazz, but its newest popular variant, “cool jazz” or “West Coast jazz,” … END_OF_DOCUMENT_TOKEN_TO_BE_REPLACED

Session players have always been my thing. Not to take away from the singers or bandleaders or what have you, but I’m more interested in … END_OF_DOCUMENT_TOKEN_TO_BE_REPLACED

Walter Smith III has been burning the candle at both ends. As he connected with JazzTimes via Zoom from a New York City hotel room … END_OF_DOCUMENT_TOKEN_TO_BE_REPLACED