Skip to content
Become a member and get exclusive access to articles, live sessions and more!
Start Your Free Trial
Home > Features > Before & After with Lenny White 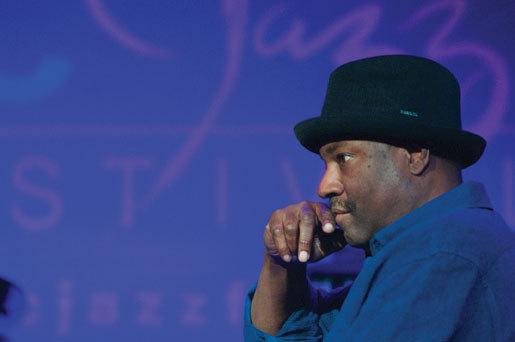 Drummer Lenny White, now 63, was barely 20 when he cut Freddie Hubbard’s Red Clay and only 19 when he played on Miles Davis’ Bitches Brew. Just three months after the Miles sessions, in November of 1969, he joined Andrew Hill to record what would become the pianist’s superb 2003 Blue Note release, Passing Ships. From there he cut two recordings with the powerful but overlooked Latin-fusion outfit Azteca in ’72 and ’73, the same year he joined the signature jazz-rock outfit Return to Forever.

White has since appeared in a striking variety of bands and made and produced numerous recordings under his own name. The latest is Live From 97 (BFM Jazz), an archival concert recording featuring trumpeter Mark Ledford, saxophonist Bennie Maupin, keyboardists Patrice Rushen and Don Blackman and bassists Foley and Victor Bailey.

BEFORE: That was a very interesting take on a Stevie Wonder song. I liked it. The music today, while it’s still in the jazz tradition, from the rhythmic standpoint the drums make it sound like hip-hop tracks, which [is interesting because] basically with hip-hop music they used sample tracks.

Do you think that’s more about the recording process today or the actual players?

No, it’s about the approach the musicians use. They tend to want to sound like the beats that were created back in the ’60s and ’70s that were done with real musicians, but when hip-hop came to the fore they sampled those records. So now they want to have drummers that sound like the sampled records. [But] the samples came from real drummers playing.

So it’s kind of a third-generation effect?

[chuckles] Yeah, you could say that. It’s interesting because most of those records that were done back in the ’60s, where they got the samples from, were made by studio musicians, and a lot of them were jazz drummers. With compression and everything it made those hip-hop records sound great, the real classic hip-hop records, but the rhythm stayed somewhat structured. So now they have drummers trying to play in a style somewhat structured.

AFTER: I know [Eric Harland and Avishai Cohen] both very well! Great musicians.

BEFORE: That was interesting; it took me back to the ’60s, to what was then called protest music. In the black community everybody was pretty Afrocentric, and there were a lot of vehicles like that that would have some meaningful words and directions. There’s a Max Roach piece called “Mendacity” that Abbey Lincoln sang, and it was kind of like that situation.

AFTER: I had heard about his record. Detroit people-Chris is from Detroit, too. That reminded me of the ’60s; it had that attitude, that style. I liked it, it was nice.

BEFORE: [laughs] Bitches Brew messed up a lot of folks! Was that record made this year? It’s interesting because Bitches Brew was made in 1969 and the influence still rings loud. I don’t know who that was, but I do know where the influence came from.

AFTER: I know Nasheet, Eric and Orrin too. … As I said, this has a Bitches Brew vibe to it, the last record had a vibe that was like the ’60s-“Mendacity” and things like that-and the first thing was the Stevie Wonder tune, which had a hip-hop vibe to it. These past couple reverted back to music of another era but just done differently today.

In line with many resourceful jazz practitioners, Gilad Hekselman responded to the enforced isolation of the COVID-19 pandemic with a turning-lemons-to-lemonade attitude that ultimately eventuated … END_OF_DOCUMENT_TOKEN_TO_BE_REPLACED

It was the 1950s. Bebop had established itself as the new paradigm of jazz, but its newest popular variant, “cool jazz” or “West Coast jazz,” … END_OF_DOCUMENT_TOKEN_TO_BE_REPLACED

Session players have always been my thing. Not to take away from the singers or bandleaders or what have you, but I’m more interested in … END_OF_DOCUMENT_TOKEN_TO_BE_REPLACED

Walter Smith III has been burning the candle at both ends. As he connected with JazzTimes via Zoom from a New York City hotel room … END_OF_DOCUMENT_TOKEN_TO_BE_REPLACED