Skip to content
Become a member and get exclusive access to articles, live sessions and more!
Start Your Free Trial
Home > Features > Before & After with Kermit Ruffins 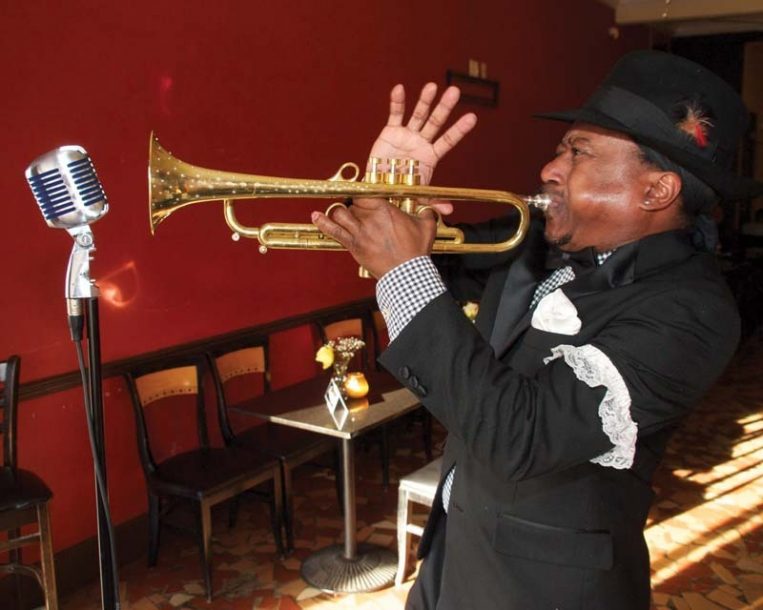 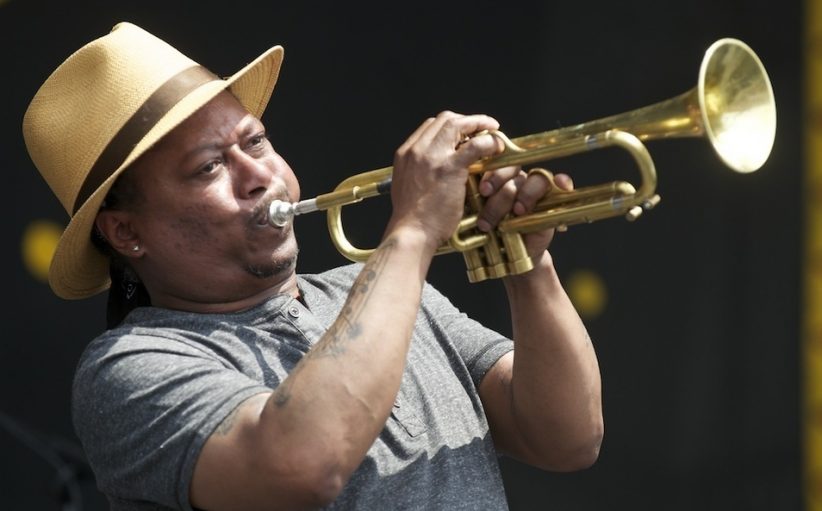 For more than 20 years, trumpeter Kermit Ruffins’ name was synonymous with the raucous, legendarily late-night Thursday gigs he performed with his BBQ Swingers at Vaughan’s in New Orleans’ Bywater neighborhood. Since retiring from that residency last summer, he’s proudly courted a quieter lifestyle, sticking to early set times and focusing more on the traditional New Orleans jazz he fell in love with as a teenager.

Last year, he released an album of early jazz classics on Basin Street Records. Eschewing his usual addition of funk and R&B elements, he plays straightforward versions of tunes such as “All of Me” and “When the Saints Go Marching In” with some of the city’s top traditional jazz players. (He also reins in his proclivity for clowning around, except for the album’s jokey title, We Partyin’ Traditional Style.) Ruffins-who co-founded the Rebirth Brass Band in 1983 before quitting a few years later to play more traditional music-is currently working on plans to record a new album with the Louisiana Philharmonic.

We met for this listening session on a storm-soaked summer day at his Tremé club, Kermit’s Mother-in-Law Lounge, which he’s operated since January. Revitalized and renamed for its new proprietor following the deaths of its original owners, R&B singer Ernie K-Doe and his wife Antoinette, the club’s sound system was pumping out soul grooves for a handful of patrons when I arrived. We conducted the session in a rental apartment above the club, where Ruffins, 49, dipped into a bucket of ice-cold Bud Lights and sang or scatted whenever a tune moved him.

BEFORE: Who is that? “When You’re Smiling” with a Latin groove. There’s a lot of wah-wah. I have that song on my list for my next CD with a symphony. That’s not James Andrews? No, it’s not James. Dr. John. Who’s that playing trumpet? Is that the tribute-to-Louis CD? I played at [the Brooklyn Academy of Music] with Dr. John.

AFTER: I should have figured that out. Couldn’t tell. That trumpet solo doesn’t sound like any of the Dirty Dozen. It had to be Efrem [Townes].

BEFORE: That sounds traditional. Beautiful clarinet there. I’ve heard this lady sing 1,000 times on WWOZ. Old-school-that’s that doghouse music. Sounds like Preservation Hall. Nobody plays like that but the Hall. That’s a funky band, too. It sounds old but it sounds modern. A lot of that good stuff always sounds like it was made yesterday.

AFTER: It’s my favorite music, for sure. I’ve been going in that direction because I know I’m getting older. I’ll make 50 this year, and I don’t want to record nothing that’s real hot because when I get older I’m not gonna be able to play it. So I’m recording all traditional stuff, stuff that I grew up loving first. I would have never guessed DeDe Pierce. That was way before my time. I never met those guys.

I would go see the Olympia Brass Band on Sundays with Tuba Fats. I thought it was another tune. But I can listen to that stuff all day. I wake up to that stuff every morning, listening to WWOZ. That’s my getting-stuff-done music.

BEFORE: That’s Miles. I saw Miles twice in Nice. Beautiful. Is that the intro for “Love for Sale”? [singing] Dab dobo dee. I’d have to hear the bass on that again; if I don’t hear the bass I don’t have the slightest idea what’s going on. I wish I had the patience to play like this. The guy is just so patient. “Come Rain or Come Shine”? No, it keeps fooling the hell out of me.

AFTER: Wow. He’s playing the real “Basin Street Blues.” It’s sad we can’t find this late-night anymore, somebody playing like this, midnight ’til 3. It would be great if somebody would reinvent that. Boy, it would be nice if someone would start at midnight and stick to this groove. It’s so hard to get people out nowadays that late that’s true to the music; you get a bunch of knuckleheads, no real jazz players. This is how it would sound-real laidback nightclub, midnight to 3. That’s Miles’ style. I know he was living that life too. All the musicians back in the day would go on at midnight and refuse to stop. They stayed so true to the craft.

I’m hearing it now. Basin Street … is the street. … It’s funny, I remember when Wynton Marsalis tried to walk onstage in [Vancouver] while Miles was playing. Miles stopped the band and said, “You can’t just walk onstage like that.” I think that was the first time I met Wynton. And then, I think it was at North Sea, I remember Dizzy Gillespie came out of the elevator and just fell down on the floor for about five minutes. Everybody was like, “Dizzy! Oh my God!” Then he jumped up! And he was like, [throws his hands up above his head and screams] “Aahh!” I’m like, “What is going on in this lobby?” I didn’t know those cats were so hilarious.

BEFORE: That sounds like one of the young brass bands; that sounds like some stuff I started. The Rebirth. When we came along we changed the whole style of brass bands. That’s the Rebirth-once I heard Derrick Tabb in there. That’s one of the tunes I never remember hearing, though. Old Stafford [Agee] on trombone right here. That’d be Chad [Honore] on trumpet. Sounds like at least two trumpet players trading eights or something. Yeah, I heard that on the jukebox downstairs just the other day. It’s all coming back now.

AFTER: It’s badass. Sounds like Derrick Tabb wrote that one and Kabuki [Derrick Shezbie] made the front part. I think Derrick Tabb invented the ending. I think the trumpets were trading: You take four measures, I take four measures. You just go around the solo, then it saves the trumpet players’ lips, makes the gig a lot easier. That’s what they do a lot on the road when they have a lot of tunes and solos: They’ll start trading just to save lips.

BEFORE: It’s a hot piano player but I can’t figure it out. It wouldn’t be Davell [Crawford] playing that straight-ahead. I love that timing. Sounds like they’re switching time: It goes from 4/4 for a minute then switches to 6/8. But it might be deceiving. That Herlin Riley? Shannon Powell? It’s so smoky. I know that’s not Adonis [Rose]; Adonis is a lot faster than that. This is so precise. It’s not fallin’ off anywhere. Most drummers will fall off, just for one second, except for Herlin. Herlin’s the only cat I know that don’t fall off, just stays right there. Zero change when it comes out to Herlin. He’s like a machine; it’s scary. I can’t tell if the piano or the drummer is the leader. Goddammit.

AFTER: Stanton! Oh, I should have known that was Tork. I couldn’t figure it out. Tork played on so many gigs with me and so many CDs, but I would have never figured Stanton because I kept thinkin’ about brothers for some reason. Sounds like a brother [laughs].

Tork is always badass. He’s one of those guys that is always super; some days I got good days and some days I just can’t play that damn trumpet to save my life. If I have a good day I try to repeat everything I did that day-the way I slept, what I ate, what I drank, the time I started drinking. … Tork, he’s always hot. Stanton is a badass.

To read the rest of this story, purchase the issue in print or from the Apple Newsstand. Print and digital subscriptions are also available. Originally Published October 26, 2014

In line with many resourceful jazz practitioners, Gilad Hekselman responded to the enforced isolation of the COVID-19 pandemic with a turning-lemons-to-lemonade attitude that ultimately eventuated … END_OF_DOCUMENT_TOKEN_TO_BE_REPLACED

It was the 1950s. Bebop had established itself as the new paradigm of jazz, but its newest popular variant, “cool jazz” or “West Coast jazz,” … END_OF_DOCUMENT_TOKEN_TO_BE_REPLACED

Session players have always been my thing. Not to take away from the singers or bandleaders or what have you, but I’m more interested in … END_OF_DOCUMENT_TOKEN_TO_BE_REPLACED

Walter Smith III has been burning the candle at both ends. As he connected with JazzTimes via Zoom from a New York City hotel room … END_OF_DOCUMENT_TOKEN_TO_BE_REPLACED