Skip to content
Become a member and get exclusive access to articles, live sessions and more!
Start Your Free Trial
Home > Features > Before & After With James Carter 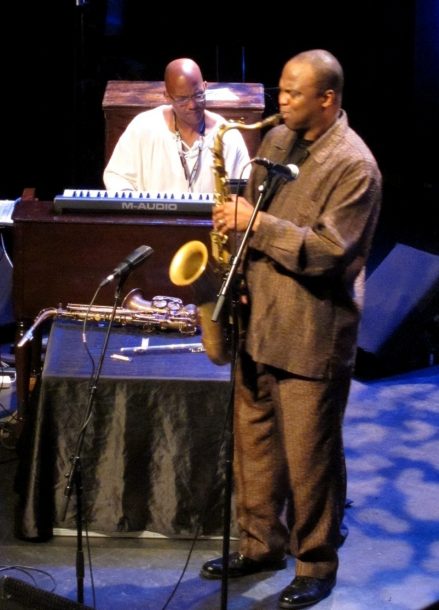 Few musicians made a bigger impression on the scene upon their arrival than Detroit native James Carter did during the early 1990s. Primarily a saxophonist, his versatile mastery of most of the woodwind instruments is astonishing. We conducted his Before & After session on a Saturday afternoon in mid-February, in front of a live audience at the Mid-Atlantic Jazz Festival in the D.C. suburb of Rockville, Md. Later that evening, Carter participated in a “Tenor Saxophone Summit” alongside Marcus Strickland and Craig Handy. His most recent release as a leader is the organ-trio project At the Crossroads (Emarcy).

Carter, 46, is an impassioned student of the music who has incorporated all of jazz’s stylistic elements, from the traditional to the avant-garde, to create his own unique and immediately recognizable sound. And as the following session reveals, he was a formidable Before & After participant with a rare understanding of the exercise’s focus on musical analysis and personal insight.

BEFORE: Is that Sidney Bechet? Sounds like one of those entrances for Sidney Bechet. [makes clarinet sounds that follow the melody]

AFTER: Sidney? I knew it! This is definitely before ’41, because after ’41 he abandoned the clarinet altogether. The epitome of thick tone on a clarinet. That’s Mr. Joy. Whew! I forgot about the long piano intro. You know how you can hear certain intros and you’re immediately catapulted back to the first time you hear a piece? That’s exactly what it felt like to me.

The first thing that I get from Sidney is that thick tone in anything that he played, whether it was the clarinet or the soprano, tenor saxophone or contrabass sarrusophone. There’s a very little known clip of him playing contrabass sarrusophone with Clarence Williams’ Blue Five back in 1924. He plays a one-chord solo; he actually switches from soprano in the middle of the recording over to contrabass sarussophone right at the top of the chorus. Oh God!

There was always a thick tone and there was always a story that Sidney had to put down. I just love it. You can sit back and listen to him all day and it’s like you’re sitting up underneath an oak tree and he says, “Son, let me tell you about this here. … Back in them days … ” Man! And there was just a whole lot of life in his playing, you know?

BEFORE: Is this Blythe? It sounds like him. Brother Blythe! [wails along with the solo] Now that’s a channel right there! There’s some thickness.

AFTER: Talking about the channeling bit, if I may, he’s the next individual that for me really channels the thickness of tone Sidney Bechet had conveyed to us. Also Pete Brown, who was one of the early alto saxophonists who had that sort of pinched tone, but he had this gruffness to it. Pete had his own sound that got over to quite a few of us. He wasn’t as well known as [Johnny] Hodges and [Benny] Carter and Bird, of course, but there was something about Pete’s sound and the way he got around on the horn that I hear Arthur as an extension of, wholeheartedly. And it just goes to show that when you listen to certain people, whether it be in avant-garde or whatever, we’re always connected to our tradition. It’s not as far off, or it doesn’t have as many degrees of separation as one would think-like Sun Ra coming out of Fletcher Henderson. Now everyone thinks that Sun Ra is [makes a twirling sound to evoke outer space], but no, it’s right there. And I think one of the hippest gigs I have ever been to was [Ra] with his orchestra at the Detroit Jazz Festival in 1988. And a whole lot of the traditionalists were flanking the stage.

BEFORE: I’m gonna take a wild guess. Is this Rudresh? I mean, it’s kind of a given, brother being from India. And this is one of the interpolations of an Indian raga. Nice tablas.

AFTER: I definitely dig where Rudresh is coming from. I’ve had the chance over the years to be on double- and triple-bills with him over in Europe and just hang out with him-very cool cat. And just listen to where he’s coming from: Fusing the elements of Indian ragas and our grooves together is basically grand. I’ve always loved the sound of where tempered instruments are able to go in between certain tonalities and different grooves.

I would like to eventually do something with my man. We’ve always talked about this when we see each other. We’re basically like two passing ships; I’m just getting off of a tour bus going into a place that he was leaving. At best we’re sharing a bill and don’t get to interface onstage. Rudresh and his group are definitely tight.

BEFORE: Braxton? Is that Anthony Braxton? It’s got that pinch on it. Is the trumpet player Kenny Wheeler? Yeah, that is Braxton. Oh, I hear the … oh yeah. You can tell certain brothers’ cadence, especially when he goes down to one of those honks. Then you can’t stump me after that. There it is.

AFTER: What label is that?

Oh yeah, Arista. Man, I dug that. I recognized Kenny Wheeler, who we just lost recently. So Anthony Braxton, the first time I ever peeped him out was his solo rendition of “Come Sunday” [from 1971]. Actually, I think that was the first time I’d even heard “Come Sunday.” Just listen to Braxton and the way that he plays, in just his solo style, and put on “Come Sunday” and imagine where he went with that. Unfettered, with no rhythm section holding him down? A total experience to me. And it gave me a much deeper respect for Coleman Hawkins, who brought the solo saxophone to the fore with “Picasso” in 1948. This is a cat who is stepping out and saying that the saxophone can truly stand on its own.

Braxton did a long interview with DownBeat entitled “Play or Die.” He said that he owed a lot to cats like Paul Desmond, but he’s like Desmond on steroids. [Braxton] was one of my earliest heroes, not only sound-wise, in terms of being able to identify him, but also from a multi-instrumentalist standpoint where he plays the whole saxophone and the whole clarinet families. He’s the reason that I’m playing the extreme clarinets, like the contrabass clarinet. Oh God, he’s just bad. And Braxton continues to be bad.

To read the rest of this story, purchase the issue in print or from the Apple Newsstand. Print and digital subscriptions are also available. Originally Published May 14, 2015

In line with many resourceful jazz practitioners, Gilad Hekselman responded to the enforced isolation of the COVID-19 pandemic with a turning-lemons-to-lemonade attitude that ultimately eventuated … END_OF_DOCUMENT_TOKEN_TO_BE_REPLACED

It was the 1950s. Bebop had established itself as the new paradigm of jazz, but its newest popular variant, “cool jazz” or “West Coast jazz,” … END_OF_DOCUMENT_TOKEN_TO_BE_REPLACED

Session players have always been my thing. Not to take away from the singers or bandleaders or what have you, but I’m more interested in … END_OF_DOCUMENT_TOKEN_TO_BE_REPLACED

Walter Smith III has been burning the candle at both ends. As he connected with JazzTimes via Zoom from a New York City hotel room … END_OF_DOCUMENT_TOKEN_TO_BE_REPLACED