Skip to content
Become a member and get exclusive access to articles, live sessions and more!
Start Your Free Trial
Home > Features > Before & After with Guitarist Adam Rogers 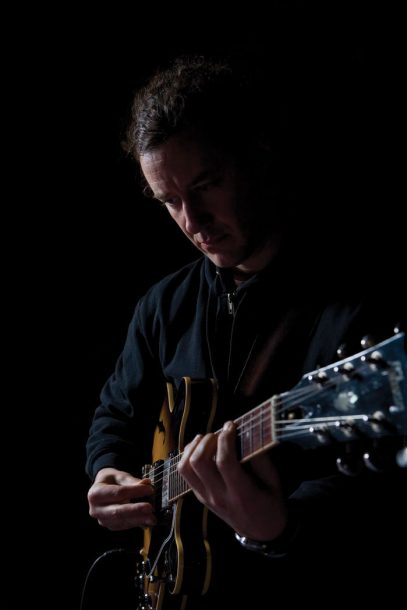 Acknowledged as one of the best jazz guitarists to emerge in the past 20 years, Adam Rogers has since 2002 released five superb recordings as a leader for the Criss Cross label, most recently 2009’s Sight, a potent trio session with bassist John Patitucci and drummer Clarence Penn. Originally a Hendrix-inspired Stratocaster player, Rogers created a stir during the early ’90s with the renegade fusion band Lost Tribe, which featured saxophonist David Binney, guitarist David Gilmore, bassist Fima Ephron and drummer Ben Perowsky. He subsequently toured and recorded with saxophonists Bill Evans and Michael Brecker and trumpeter Randy Brecker and worked with singers Norah Jones, Cassandra Wilson, Luciana Souza, Melissa Walker and Magos Herrera.

More recently, Rogers has been featured in Chris Potter’s Underground and Randy Brecker’s “Pop” project. (The latter group performs Kenny Werner’s “derangements” of noted pop, rock and R&B sides Brecker played on.) As a leader, Rogers currently fronts two separate projects: a jazz quartet featuring Penn, either Scott Colley or Matt Brewer on bass and either Craig Taborn or David Virelles on piano; and the Band of Gypsys-inspired power trio DICE, in which he’s joined by Ephron and drummer Nate Smith. In every setting, the New York City native exhibits exquisite control and taste as an accompanist and a scorching, postbop-meets-Hendrix single-note attack as a soloist.

Gregory Porter got a late start as a recording musician, but that was because he was busy flexing his chops on a culinary stage. His … END_OF_DOCUMENT_TOKEN_TO_BE_REPLACED

The sound that Horace Silver pioneered in the ’50s and ’60s—for a while, all but synonymous with the sound of Blue Note Records—is for many … END_OF_DOCUMENT_TOKEN_TO_BE_REPLACED

If you want to find out how good your sound system is, the worst way to do it is to play your favorite jazz albums. … END_OF_DOCUMENT_TOKEN_TO_BE_REPLACED

For our 2020 Year in Review section, we calculated the top 40 new releases and top 10 historical/reissue recordings of 2020 based on year-end lists … END_OF_DOCUMENT_TOKEN_TO_BE_REPLACED