Skip to content
Become a member and get exclusive access to articles, live sessions and more!
Start Your Free Trial
Home > Features > Before & After with Gregory Porter 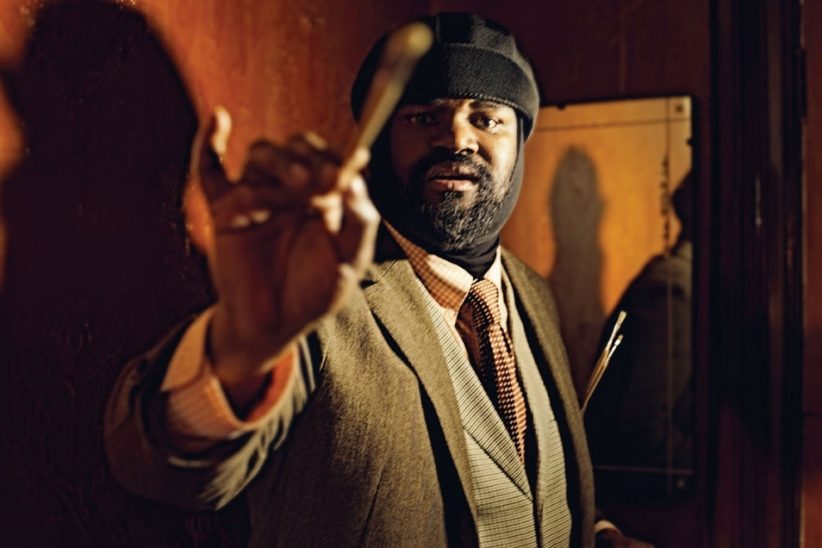 Gregory Porter strolls into the lobby of the Monterey Hyatt on a picture-perfect Friday afternoon in September, and the pre-festival buzz suffusing the room seems to ascend to a higher pitch. With the release of his third album, Liquid Spirit, three days prior, he’s added another few gallons of rocket fuel to his career’s torrid upward trajectory, a ride powered by his Grammy-nominated debut from 2011, Water, and his equally heralded follow-up, 2012’s Be Good (both on Motéma). With Liquid Spirit, his first for Blue Note, he seems poised for the same kind of crossover leap taken by his labelmate Robert Glasper. But in place of Glasper’s hip-hop grooves and new-school-R&B beats, Porter draws on gospel, soul and the politically conscious R&B that made the early 1970s such a fervently creative era.

A big man with a big, earnest sound, he’s getting his message out and building a reputation for incendiary performances. After tearing up one of the Monterey Jazz Festival’s smaller rooms last year, he got invited back to the big stage. Porter, 42, sat down for this Before & After in the Hyatt a couple of hours before his soundcheck.

BEFORE: I don’t have that record, but it feels like Bill Henderson. I could be wrong. Ever-present blues; it’s not blues, but ever-present blues in his approach to the song. He’s like the masculine manifestation of Etta Jones and Dinah Washington. In addition to the ever-present blues, I would suspect he talks like he sings. Another cool thing is that he’s unafraid of his own personal, individual charisma coming out in the song. Now, if you want that song performed in a cookie-cutter fashion, he’s not your man. He’s stylizing it, this is my song.

AFTER: That was my second guess [laughs]. Everything I just said you can say about Ernie. [Sings] “There is no place on earth I would rather be. Give me the bright lights, big city for meee.” I’m stealing that song of his.

BEFORE: Andy Bey. You can’t write the qualities that he has in his voice; you can’t write it down on paper. You’ve got to feel it. It’s like aural human spirit. In his voice, I hear this special thing. He can sing happy songs extraordinarily, but he has this elegant, sophisticated sadness in his voice, something that I heard years ago. It was like a masculine vulnerability in his voice, and that’s OK. It’s OK to be that way. When asked the question about singers, Andy Bey always comes up. When they give you those compliments mentioning Andy Bey, [it’s like,] “No, don’t say that. He’s over there.” [Motioning upward with his hand]

BEFORE: Very cool. Mel Tormé. Man, what a pure, clean, almost instrument-like [voice] he had. He’s a composer, arranger, and it almost feels like he was probably a horn player at some time. You can hear all that in his voice, though he didn’t scat there or deviate from the melody too much. He had one of those instruments like Sammy Davis Jr. They only produced those kinds of voices then, voices that can do everything. And he could. His records are so together. That was the thing to do at that time. I always wondered, “What are those recording sessions like? What are those rehearsals like? Are they that perfect?” They’re just so right on. He’s a master and icon. Ballads and uptempos, novelty songs—he did it all. I met his son James Tormé in London, and he was talking about his father, and I was talking about Nat King Cole, and James mentioned that Cole used to come over to the house and hang out.

How did the arrangement hit you?

He always did these let-me-show-you-everything kind of arrangements. If I had just listened to the intro and somebody said, “Here’s a list of four or five people,” I would have said Mel Tormé because it suits his voice. It could be his arrangement. It did everything like he can do.

4. Stevie Wonder
“I Love Every Little Thing About You” (from Music of My Mind, Motown). Wonder, vocals, keyboards, drums, harmonica. Recorded in 1972.

BEFORE: Ray Charles and Sam Cooke opened the door for the church, and that sound came out into popular music with alacrity. I don’t have that record, but when I listen to Stevie, like when I listen to Donny [Hathaway], Sam Cooke or Ray Charles and they’re singing a love song, sometimes I actually put the love song in the church; I put it on the altar. And then I see this young man, maybe from 15 to 30, and he’s singing his heart out in church in a way—just taking that energy and putting it in another genre. That’s what I hear there.

This is the interesting thing about religion. Once you’ve seen the spirit move—doesn’t have to be the black church—once you’ve gotten close to that spiritual thing musically, you want to recreate it in every place in your life. Now, sometimes it’s an unattainable thing, and you’re in search of a whole bunch of different unobtainable things. Now I’m talking the pitfalls of musicianship. That energy and power is so extraordinary that you want to connect it to that girl that you love, you want to connect it to song, music, your love for the earth, community, the future. It’s an extraordinary thing.

It’s a spiritual thing, and sometimes it’s hard to say to a person who doesn’t consider that realm valid in music or in life. But it’s so deep and so real that even criticism can’t touch it. [Laughs] I don’t care—I wasn’t singing for you, I was singing for God.

Did you listen to a lot of Stevie growing up? That was from Music of My Mind. He was 22 when that came out.

I did listen to a lot of Stevie. But it was on the radio regularly, so even if you didn’t have his records you heard him. But we had his records.

5. Bill Henderson
“All or Nothing at All” (from Bill Henderson With the Oscar Peterson Trio, Verve). Henderson, vocals; Peterson, piano; Ray Brown, bass; Ed Thigpen, drums. Recorded in 1963.

BEFORE: Wow, that’s a special vibrato, and with a mature voice like that. When did they capture him in his life—was that younger or older? I think it’s the older. [Ed. note: Henderson was about 37 at the time of recording.] I’m getting my masters mixed up, but I think now that that’s Bill Henderson. He has an approach that I’m waiting for, to be 60 and deliver a song with such wisdom and authority that that becomes the key to the song. He could talk half of that song if he wants to and it would be even more effective because there’s such authority.

And I hope I’m still around and performing when I’m in my 60s and have gone through more seasoning and more pain. I don’t welcome pain, but I know it’s going to come. I don’t welcome heartache, tragedy and loss, but because the jazz singer can have longevity, that experience can manifest itself in the wise masters who have seen so much. They still have a voice, and they have something to say.

There was a thing for a while, 17-year-olds doing this really mature music about loves they’ve had in their life, and it was so unbelievable. Great voices, but I just didn’t believe them. I believe everything that man said. That’s the cloak that the jazz singer is able to step into, these characters that these songs offer. With a voice like that and a character and a personal musical charisma like that, he can step into any song that suits him and it’s his song.

To read the rest of this story, purchase the issue in print or from the Apple Newsstand. Print and digital subscriptions are also available. Originally Published January 13, 2014

In line with many resourceful jazz practitioners, Gilad Hekselman responded to the enforced isolation of the COVID-19 pandemic with a turning-lemons-to-lemonade attitude that ultimately eventuated … END_OF_DOCUMENT_TOKEN_TO_BE_REPLACED

It was the 1950s. Bebop had established itself as the new paradigm of jazz, but its newest popular variant, “cool jazz” or “West Coast jazz,” … END_OF_DOCUMENT_TOKEN_TO_BE_REPLACED

Session players have always been my thing. Not to take away from the singers or bandleaders or what have you, but I’m more interested in … END_OF_DOCUMENT_TOKEN_TO_BE_REPLACED

Walter Smith III has been burning the candle at both ends. As he connected with JazzTimes via Zoom from a New York City hotel room … END_OF_DOCUMENT_TOKEN_TO_BE_REPLACED