Skip to content
Become a member and get exclusive access to articles, live sessions and more!
Start Your Free Trial
Home > Features > Before & After With Fred Hersch 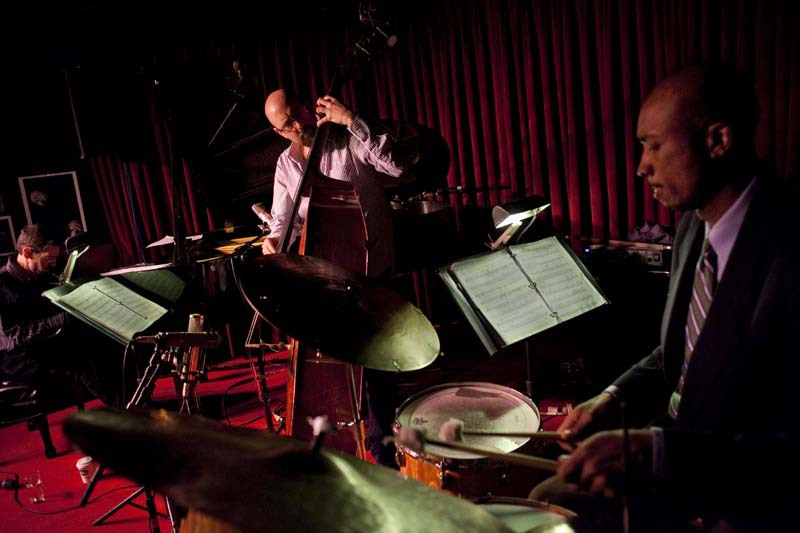 Fred Hersch is one of those rare pianists who can complement almost any musical situation while asserting a strong personal aesthetic. He has absorbed the influence of (and no doubt influenced) a storied list of collaborators-Joe Henderson, Art Farmer and Bill Frisell among them, in addition to vocalists Dominique Eade, Norma Winstone and Nancy King. As an educator, Hersch has inspired and mentored several generations of pianists; Ethan Iverson, Brad Mehldau, Dan Tepfer and Sullivan Fortner are all former students.

Now 60, Hersch seems busier and more celebrated than ever. The eight-time Grammy nominee recently won a 2016 Doris Duke Artist Award and was selected as the 2016 Pianist of the Year by the Jazz Journalists Association. Having released dozens of albums as a leader, Hersch’s new disc, Sunday Night at the Vanguard, finds the venerable pianist, with triomates John Hébert (bass) and Eric McPherson (drums), reinterpreting Thelonious Monk, Kenny Wheeler, Jimmy Rowles and the Beatles, alongside striking originals. Hersch has recorded live at the Village Vanguard four times, and over the past three decades has cultivated a stronger association with the venue than perhaps any pianist save for Bill Evans, with a portrait hanging in the club’s de facto Hall of Fame to prove it. He recently took time out of his packed touring schedule to sit down at his SoHo apartment for his second Before & After with JazzTimes (the first was in 1998).

AFTER: That’s it. I should know that. I recognized the tune and the very deliberate sense of time feel. I wanted to wait ’til the solo started, to see the lines, to confirm my suspicion that it was Herbie indeed. His approach to lines is certainly very different than many of the bebop and postbop players, with a Monk influence but also definitely his own thing. It’s a great track.

BEFORE: The horns are definitely throwing me off here. The song is “That Old Feeling.” The recorded sound isn’t great. The piano is out of tune. Beautifully crafted lines. Nice pop on the time. When I heard the applause at the beginning, I thought, “This is going to be Ahmad Jamal.” No. It could be Hank Jones. Just listening to the sound and the time feel, I’m not quite sure who it is.

AFTER: That would totally make sense. I heard Cedar play many times, and I should have gotten that, because he definitely has a pop on the time that Hank doesn’t have, and it’s a more modern language.

BEFORE: “‘Round Midnight” obviously-reharmonized-but I’m not sure who this is yet. I’m just waiting to hear the solo so I can get a little more information. The sound isn’t as edgy as Denny Zeitlin.

AFTER: Oh, I was right. Denny has a great sense of harmony, and I’m not sure if that was Cecil McBee and Freddie Waits. Denny is to me a great kind of extension of the Bill Evans lineage, and full of harmonic surprises. He’s a strong composer-arranger and always puts his own stamp on stuff. I stumbled upon him a long time ago when I was first learning jazz, and I thought, “This is really super-zippy.” And he’s one of those great piano players that don’t get talked about as much, although I know he has an active recording career now, in his 70s. I have all of those Columbia albums. He’s certainly an underappreciated pianist.

BEFORE: At first I thought Jaki Byard. I’m just waiting to hear. I worked with him in Boston in the mid-’70s, at NEC [New England Conservatory]. Jaki is a master of every historical style, and certainly eccentric. He draws so heavily from Earl Hines, from the stride players, and he also has a very personal sense of line. He was one of my heroes learning jazz in Cincinnati, and I heard him on Mingus records and Dolphy records. The fact that I could actually go and hang out with him was a total thrill. He was a huge influence. It was great to hear that.

BEFORE: Keith Jarrett. I know the name of the tune, but it’s just escaping me. I’m going to get it, I think. Definitely the recording sound is ECM. It’s one of his better-known tunes, and once again the title’s escaping me and I can’t remember what album it’s on. But it’s definitely Keith. It’s interesting.

AFTER: The Köln Concert is probably the best selling solo-piano album of all time, and I don’t own it. I used to listen to Solo Concerts: Bremen/Lausanne, and for some reason this escaped me. I’ve certainly heard it, but I never owned it. I’m probably one of the few people who didn’t own it. That was definitely mid-’70s Keith. What’s the name of that tune? It’s got some sort of corny title.

BEFORE: Once again I need to wait ’til I hear the lines. A lot of chops. Obviously some Bill Evans influence.

AFTER: You know, it’s funny. I thought of Joanne. It was on the tip of my tongue. I knew Joanne well in 1977. Certainly a lot of chops, but this particular track doesn’t really strike me emotionally very much. That’s Eddie Gomez. Oh, Clint Houston. I used to play with him at that time. That would make sense. Joanne and Clint played together with Stan Getz.

“It Should Have Happened a Long Time Ago” (Live at the Village Vanguard, DIW). Allen, piano; Haden, bass; Motian, drums. Recorded in 1990.

BEFORE: My first guess would be somebody in the cracks, like Steve Kuhn. It sounds like a drummer like Barry Altschul or Motian. Yeah, Paul. I suppose it could be Paul Bley. No. The tune, the style of writing, I can’t quite identify. It’s not really saying anything to me. So I guess by process of elimination, if it’s Motian, who might that be? I’m stumped on this.

How would you define the Vanguard sound?

Most of the recordings there, you really feel like you’re in the room. There’s a certain … there’s just a Vanguard sound. I just did a new trio album there, and I’ve recorded there four times. Usually I can recognize recordings from the Vanguard, but I didn’t recognize Charlie’s sound, which is odd, because I played a lot with him and recorded a lot with him, so I’m curious what was going on with the sound. Maybe it was the MP3, but usually I can recognize Charlie.

BEFORE: [almost immediately] Glen Moore and Nancy King. Nancy is a super badass-the underappreciated great badass jazz singer. We did a live duo album at Jazz Standard. I think that brought her name out to some people who weren’t aware of her. She had a little visibility with these recordings with Glen. Actually, she and I recorded this tune on our album [as “If You Never Come to Me (Inutil Pasaigem)”]. Rhythmically, lyrically, emotionally, she’s one of the all-time great jazz singers, and I adore her.

BEFORE: My first guess is Gonzalo Rubalcaba and Charlie Haden.

AFTER: I’ve known Ethan Iverson since he was 21, and we’ve worked together in a student-teacher relationship, and of course we’re peers. I know a lot of bands, like the Brad Mehldau Trio and [the Bad Plus], do pop covers. If I do a pop cover, it’s usually Joni Mitchell or the Beatles or something like that. There was certainly some beautiful playing from Ethan and great sound from Reid.

BEFORE: It sounds really familiar. It’s “Think of One.” Possibly Jason Moran. Is it Vijay?

AFTER: Robert Glasper totally makes sense. Now I can tell that it’s Robert Glasper, once the trio came in. Definitely the harmony, the lines, the time feel, the kind of technique, the sound-it’s definitely Robert Glasper. I was just fooled by the introduction.

BEFORE: That’s Benoît Delbecq. In two notes I know it’s Benoît. This could be from Pursuit. No, it’s not. Anyway, I think Benoît is a genius. We did a double-trio project called Fun House. I learned so much from working with him. That was two pianists, two basses, two drummers and electronics. His sense of line, composition and space is awesome. I think he’s one of the great, great genius musicians today.

BEFORE: I just played a gig with Cécile. She certainly sounds very different on this track. Cécile’s wonderful. We had a great duo gig. She’s a great musician and a lovely person, and I may have even heard her do that tune live. It’s a great instrument, a great voice. She’s got great instincts, and I think she’s really happening.

BEFORE: I guess no test would be complete without a Vijay Iyer tune. That’s from the newest trio album. I definitely recognize the sound of that trio, and Vijay is certainly a formidable musician. He’s got a lot of command.

In line with many resourceful jazz practitioners, Gilad Hekselman responded to the enforced isolation of the COVID-19 pandemic with a turning-lemons-to-lemonade attitude that ultimately eventuated … END_OF_DOCUMENT_TOKEN_TO_BE_REPLACED

It was the 1950s. Bebop had established itself as the new paradigm of jazz, but its newest popular variant, “cool jazz” or “West Coast jazz,” … END_OF_DOCUMENT_TOKEN_TO_BE_REPLACED

Session players have always been my thing. Not to take away from the singers or bandleaders or what have you, but I’m more interested in … END_OF_DOCUMENT_TOKEN_TO_BE_REPLACED

Walter Smith III has been burning the candle at both ends. As he connected with JazzTimes via Zoom from a New York City hotel room … END_OF_DOCUMENT_TOKEN_TO_BE_REPLACED