Skip to content
Become a member and get exclusive access to articles, live sessions and more!
Start Your Free Trial
Home > Features > Before & After with Francesco Cafiso 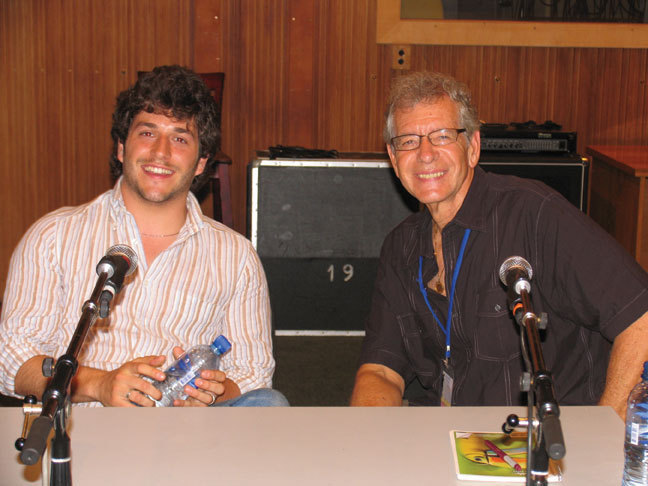 Most child prodigies in jazz are pianists. Francesco Cafiso of Sicily could do astonishing things with an alto saxophone when he was 9. At 11, he won his first international jazz competition. At 12, he played the Pescara Jazz Festival in Italy with Wynton Marsalis, who brought Cafiso along on his 2003 European tour.

I first heard Cafiso at the Umbria Jazz Melbourne festival in Australia in May of 2005. It was an unprecedented experience to hear ideas of extraordinary complexity and logical elegance from a 15-year-old barely over 5 feet tall. Cafiso’s sound was a gigantic, brilliant, wake-the-dead cry, and his fluency in hardcore bop proved how it is an ageless form of communication.

He is now 22, and taller, and his art has evolved. On his CAM Jazz recordings Happy Time (2006) and Angelica (2009), and on last year’s Verve import Moody’n, he has clearly moved his search for personal expression beyond the boundaries of bebop. He still plays like an angel, but he is now an angel with a nasty streak.

In 2011, I sat down with Cafiso at the Rigas Ritmi festival in Riga, Latvia. Our conversation took place in a Radio Latvia studio before a live audience, mostly students from the festival’s master classes and workshops.

It haunted Cafiso that he missed Art Pepper. After our presentation, I ran into him several more times at the festival. Every time he saw me he looked down and shook his head, chastising himself, muttering, “Art Pepper, Art Pepper.”

Cafiso spoke in Italian. His remarks were translated for the public session by Antra Fricberga, with additional subsequent translation by Magda Codognotto.

BEFORE: Actually, I thought it was me [laughs]. No. It was Bird. With Dizzy?

AFTER You can say that Charlie Parker is the father of all today’s jazz players. He was and continues to be my main source of inspiration, because he invented a way of playing, because he revolutionized how to relate to the saxophone, because he created a new code for a very specific style.

Did you listen to Parker from the beginning?

I started immediately with jazz, without going through other musical genres. I think I was lucky for that. The first sax player I appreciated, at that time not knowing jazz yet, was Phil Woods. I loved him for his sound, his fluid way of playing, his very good technique, his great ideas. Woods gave me the technical background to develop my own sound. But soon I realized that before Phil Woods there had been someone else; Phil Woods is only the continuation of Charlie Parker.

BEFORE: Lee Konitz is one of my favorites when it comes to the way you can think about music. I am reading his book with Andy Hamilton, Conversations on the Improviser’s Art [University of Michigan Press]. Konitz talks about intuitive improvisation-that is, actually improvising what you feel at that moment, without playing what you already know, what you learned over the years. You have to use the emotions you have at that precise moment, and use all the emotional components, including those given to you by the accompaniment and by the audience. Intuitive improvisation-that’s what Lee does, and he continues to do it. And that’s why every time you listen to him you feel a different emotion. Although he was a contemporary of Parker, he was able to develop his own style, his own sound, his own way to live and feel music, completely different and parallel to Charlie Parker’s.

AFTER: Konitz uses a repertoire of 10 or 15 standards. I have about 50 Lee Konitz CDs, and he keeps playing “Alone Together” and “The Song Is You.” But the standards are only a pretext to create music and improvise.

BEFORE: I don’t know who this is.

AFTER: I don’t like this-I mean, this type of music, this genre. My tastes are totally different. They are still great musicians, very talented, but I prefer a different type of music.

AFTER: Ornette Coleman was another master to sax players, actually not only to sax players but to jazz players in general. He was the founder of free jazz. He’s a musician in his own world; he has his own way of seeing and feeling music.

You are known as a relatively straight-ahead player. How much have you listened to Coleman and other free-jazz musicians?

The first Ornette Coleman record I bought, I was on tour with Wynton Marsalis in Paris in 2003. I was listening only to Parker, Phil Woods and others. With Wynton I went to the Virgin store in Paris. Wynton and his musicians suggested I purchase The Shape of Jazz to Come. This was my first Ornette Coleman CD. Only recently have I come to appreciate Coleman. It was when I realized that you can hear Charlie Parker in him. I mean, the themes sound like Charlie Parker compositions, but at their base they have a free conception that makes everything very open. You can hear the tradition but it’s coming from the future.

BEFORE: I don’t know who it is.

AFTER: I really like the rhythm section. I could play the blues with those guys. Hmm, I don’t know these sax players. Based on what I heard, their approach to music is completely different from mine. Basically, I would have to hear more to be able to express a personal opinion.

“I Got It Bad (And That Ain’t Good)” (from Ellington at Newport 1956 (Complete) , Columbia/Legacy). Johnny Hodges, alto saxophone; Ellington Orchestra. Recorded in 1956.

BEFORE: Johnny Hodges-with Duke Ellington, right? I know the song but I can’t say the title. Hodges also created a specific approach to saxophone. He is so sensual. With few notes he can express a tremendous amount of emotion. On a technical level, sax players recognize him right away because he uses a blending technique [sings]. That’s blending. He’s a musician that sax players need to listen to in order to understand the full range of expression that is possible on the saxophone.

So many of today’s saxophonists play several reed instruments. You seem to be an alto specialist. Are you interested in other instruments?

It’s hard. That’s my opinion. The alto is the hardest saxophone to play. It’s hard to get an interesting sound on an alto saxophone. If you don’t have a nice sound, you can end up being irritating. I can play all the saxophones. Recently I tried the tenor sax. I like it a lot, but I consider myself to be an alto saxophone artist. What I like to do at times is play the alto sax as if it were a tenor sax, to try to achieve a sound that is neither too alto nor too tenor [laughs].

BEFORE: No idea who it is. Let’s say I prefer a different way of playing. I live and hear music in a different way. However, I believe that the most important thing, for music to be relevant, is that you have to have freedom of expression and respect toward fellow musicians and for art in general. And what I appreciate the most is the desire to experiment. So I may not like this genre very much, but it doesn’t matter. If it’s done with honesty, if you do it respecting music, then it’s still relevant.

In line with many resourceful jazz practitioners, Gilad Hekselman responded to the enforced isolation of the COVID-19 pandemic with a turning-lemons-to-lemonade attitude that ultimately eventuated … END_OF_DOCUMENT_TOKEN_TO_BE_REPLACED

It was the 1950s. Bebop had established itself as the new paradigm of jazz, but its newest popular variant, “cool jazz” or “West Coast jazz,” … END_OF_DOCUMENT_TOKEN_TO_BE_REPLACED

Session players have always been my thing. Not to take away from the singers or bandleaders or what have you, but I’m more interested in … END_OF_DOCUMENT_TOKEN_TO_BE_REPLACED

Walter Smith III has been burning the candle at both ends. As he connected with JazzTimes via Zoom from a New York City hotel room … END_OF_DOCUMENT_TOKEN_TO_BE_REPLACED