Skip to content
Become a member and get exclusive access to articles, live sessions and more!
Start Your Free Trial
Home > Features > Before & After with Drummer Jim Black 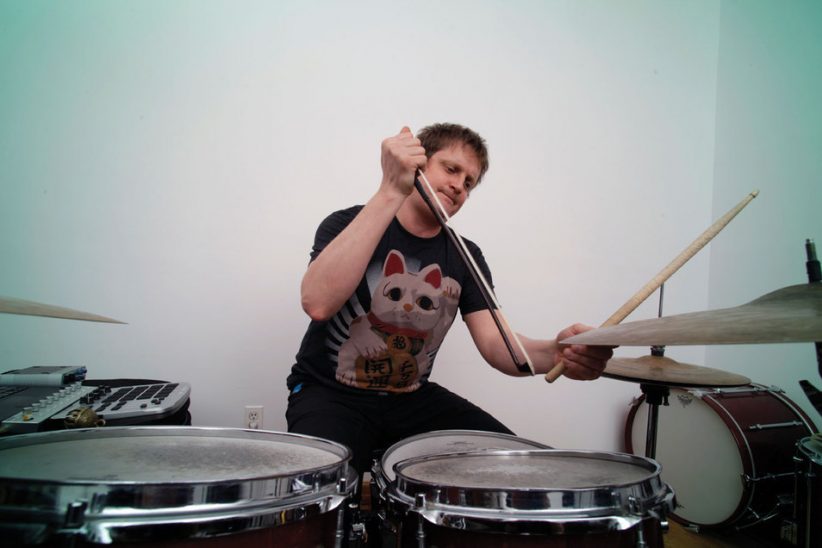 A remarkably versatile and inventive drummer-composer, Jim Black has made a major impact on the alternative jazz scene over the past 20 years through his work in Tim Berne’s Bloodcount, Dave Douglas’ Tiny Bell Trio, Ellery Eskelin’s trio and Uri Caine’s various ensembles. He has also appeared on recordings by Ben Monder, Chris Speed, David Binney, Satoko Fujii, Carlos Bica, Cuong Vu and Laurie Anderson, among many others.

Black, 45, currently leads the raucous and experimental AlasNoAxis with saxophonist Speed, guitarist Hilmar Jensson and bassist Skúli Sverrisson, as well as a new trio with bassist Thomas Morgan and pianist Elias Stemeseder. He also performs and records in the improv trio bb&c, featuring saxophonist Berne and guitarist Nels Cline, and in the quartet Endangered Blood, with saxophonists Speed and Oscar Noriega and bassist Trevor Dunn.

A Seattle native, he attended Berklee College of Music in Boston, where he formed the cooperative group Human Feel with saxophonists Speed and Andrew D’Angelo in 1987. (Guitarist Kurt Rosenwinkel joined in 1990.) Another adventurous co-op he played in during the ’90s was the Balkan-flavored Pachora, featuring Brad Shepik on guitar and saz, Speed on clarinet and Sverrisson on electric bass.

Currently a resident of Park Slope, Brooklyn, Black had just returned from a tour of Italy with guitarist Walter Beltrami’s Postural Vertigo Quintet when we sat down for his first Before & After session in August. “I’ve been in Europe almost all summer,” he said. “I just came back for three days to teach, and next week I’m going to Greece for a week, just on vacation. Then I go to Iceland for a week, then to Hamburg to record with the NDR Bigband. So the schedule is pretty dense these days.”

In terms of his drum setup for all the varying gigs he plays throughout a given year, Black said, “Everything’s the same now-same cymbals, same drums. Just the attitude changes.”

BEFORE: I don’t know who it is. Obviously these are killing younger players; I’m guessing late 20s, early 30s. I’m sure I know who they are, although I don’t recognize their sounds offhand-actually, [I don’t recognize] anybody’s. That was a blur-a nice blur, but I don’t understand why this generation can’t write their own music, or players don’t choose to play their own music more. Why must they do that to a Monk tune? The idea’s nice, but there were so many things going on. I have to say, my heart doesn’t respond much to that way of playing. I know it’s a very popular way of playing now, and a lot of guys are doing it in different ways and the conservatory students are impressed by it. But this obsession with complexity, I just don’t get it. The idea of making endless variations-I don’t know. My question is, how many ideas do you need to rearrange somebody’s music with? I don’t know what else to say about this, exactly.

This tune is not necessarily representative of the rest of the album. There are only three covers and the other tracks are originals by the drummer-composer-bandleader.

Yeah, and it’s cool. I played in Tiny Bell Trio with Dave Douglas and we played covers. But there were only a few parameters that he would address in a cover tune. I’m sure it’s heartfelt in the way they do it here and why they do it. But it kind of leaves me-it’s sort of all over the map in a way that I can’t quite grip all of it: the Indian rhythmic variations with the Monk tune, and even the way they’re playing, where they throw licks around and everything. Which is again … cute. But I don’t know how much of that I can take, though, when I listen to music. Thin it out just a little bit, for me.

I began to notice this some years ago with guys that were in their 20s and early 30s that were well educated and all great players, but I’m waiting to see what it turns into. I’m waiting to see if it gets just a little more personal as a complete picture. I would rather hear someone fail with their own music than maybe try something like this. I mean, it’s amazing, but my heart doesn’t respond that much to it. Is this [pianist] Jean-Michel Pilc? I know his trio does standards with endless variations of tunes. I’m wise to it, and I love the idea of playing standards and tunes, but I need to find a way that’s a little more legit and not so obvious in terms of … I don’t know. I hate to say it, but I feel like it’s a little exploitive in a weird way.

AFTER: Again, they’re all really good players, I just don’t understand the direction sometimes. Of course Ari is a great drummer. I know who he is, my students know who he is. He’s part of the community. Actually, I didn’t know who he was until my students told me about him, and I checked him out. I know what he’s into, I’ve watched his videos. I just don’t feel that much when I listen to it. It’s just a taste thing, and taste is everything. They’re really good, but I can tell you, for sure, it’s not my taste. It is what it is. I think there’s room in the world for all of it, but it’s not my way. It loses me a little bit.

BEFORE: [almost immediately] “Body and Soul”? That’s Joey, no question. Joey’s a master of this. I saw him play “Alfie” at the old Knitting Factory years ago. What album is this from?

AFTER: There are very few people that I’ve heard that actually play that way. That’s probably not his kit, though. That’s not really his sound. He’s probably playing the house kit. His bass drum is usually tuned a little lower than this. When I was in college, hearing that band with Frisell and Kermit Driscoll, Hank Roberts and Joey, that pretty much took care of my college years. Human Feel opened for them at a gig in Boston. That’s how I met Joey. I remember watching them with Chris Speed and going, “What is this? What kind of approach is this?” They were very gracious to us and liked what we were doing.

When I moved to New York in 1991, Joey tried to hook me up with gigs whenever he could. That’s how I met Tim Berne; Joey mentioned me to Tim. Yeah, Joey’s one of the heaviest, especially playing solo. The guy’s a one-man show and a magician. He can generate audio magic. He’s got a touch and technique like nobody else, and his time is impeccable. Growing up, for me it was Joey, Jeff Watts, Paul Motian, Jack DeJohnette: These were the guys who most inspired me as a drummer.

BEFORE: That’s Tom Rainey. I knew it in two seconds from the way he hit. At first I thought it might’ve been Tom with Tim Berne, but it caught me off guard because it was soprano. And I wasn’t sure it was Mary at first. She’s really got her own thing going on with sound and approach. Mary’s sounds are also a giveaway, especially that thing she just did there with the kind of weird bendy effect. No one I’ve heard does that; it’s hers.

AFTER: What I like the most about this is that it’s all going forward. I really wasn’t sure where that was going to go, and that’s the most beautiful thing to me. I like where it doesn’t end up.

BEFORE: I think I know who this is. Haven’t heard it in years, though. It might be young Tony.

AFTER: I haven’t heard this since college, but we spent some time dealing with it, trying to wrap our heads around it. My first album with Tony was Miles’ Live at the Plugged Nickel, which I totally loved. And then when I heard this, it was way too “out” for me. I didn’t get it, but in retrospect it’s unbelievable. He’s only 18 here, and he sounds fully formed at this young age in terms of conception. Technically it’s just amazing. Everyone’s still trying to catch up with Tony technically. Tony’s sound and his touch, he’s coming from the tradition of a rudimental upbringing, but it’s so beyond that. It’s so much him at such a young age. He either allowed himself to be free or maybe one of his older mentors said, “Hey man, do your thing.” I don’t know how you get to have that kind of voice at 17, 18, and also playing at such a mature level in terms of group chemistry.

When he played with Miles during this period it wouldn’t be this open of a flow, it would be more on the grid. Although that live album that came out last year with Miles in Europe from ’67-absolutely the gold mine. The band’s playing is just on this highest level on that album. When I went on tour with Endangered Blood earlier this year, we’d listen to that CD on long drives between gigs, and Chris and I would be in the backseat just howling with delight. So good! I got to see him play a few times and it was incredible, and not the Tony I grew up on. It was a different Tony. We heard him in the Regattabar in Boston playing with his band that had Mulgrew Miller on piano and Bill Pierce on sax. It would’ve been amazing to hear him at 50, just to see how the progression went.

In line with many resourceful jazz practitioners, Gilad Hekselman responded to the enforced isolation of the COVID-19 pandemic with a turning-lemons-to-lemonade attitude that ultimately eventuated … END_OF_DOCUMENT_TOKEN_TO_BE_REPLACED

It was the 1950s. Bebop had established itself as the new paradigm of jazz, but its newest popular variant, “cool jazz” or “West Coast jazz,” … END_OF_DOCUMENT_TOKEN_TO_BE_REPLACED

Session players have always been my thing. Not to take away from the singers or bandleaders or what have you, but I’m more interested in … END_OF_DOCUMENT_TOKEN_TO_BE_REPLACED

Walter Smith III has been burning the candle at both ends. As he connected with JazzTimes via Zoom from a New York City hotel room … END_OF_DOCUMENT_TOKEN_TO_BE_REPLACED