Skip to content
Become a member and get exclusive access to articles, live sessions and more!
Start Your Free Trial
Home > Features > Before & After with Chris Potter 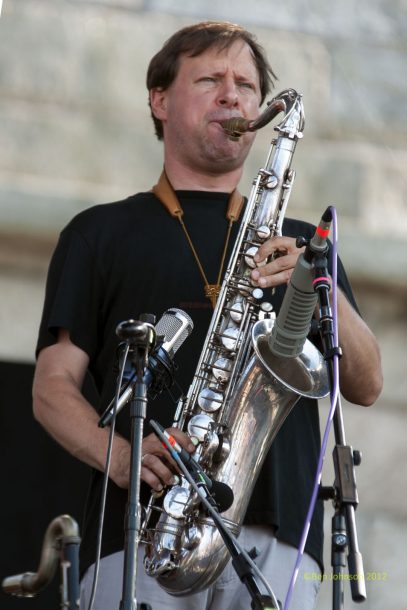 Juggling schedules and finding a last-minute window of opportunity, we met up with saxophonist, composer and road warrior Chris Potter, 43, at a hotel in Bethesda, Md., just after the start of his six-month tour with the Pat Metheny Unity Group. When Potter returns home to New York City in the fall, he’ll focus on his next ECM CD, the follow-up to his Odyssey-inspired 2013 release, The Sirens. For this Before & After, he preferred to listen to each song in its entirety before commenting.

BEFORE: Maybe it’s Joe? That’s some classic, down-the-middle, mid-’60s Blue Note even-eighths blues. It’s a very good example of a certain kind of jazz. Everybody sounds good-within a style but also creatively. For a minute I thought it might be Junior Cook, who had a similar sound to Joe, but then he did some little rhythmic thing that was so hip and intelligent and musical that I knew it wasn’t somebody who sounds like Joe. That’s Joe. It feels good. There’s a lot of music I like to listen to, all sorts of stuff, and they all put me in a different space. But hearing this takes me back to home base, which is really nice. It’s not hard to understand and it’s not shallow. It’s the real thing.

BEFORE: The thing I liked about it is it’s so creative and the time feel is so good. It had a focus from start to finish with a simple, folky melody, but harmonically the bass is a half-step higher than the key that they’re playing the melody in. And it’s got a kind of marching beat to it. I thought both musicians worked well within that. In other hands it could be too ordinary or too avant-garde shticky. I liked what they did with it. They might [be of a] younger generation, but I could be totally wrong.

AFTER: That’s Billy Harper? No kidding! That kind of makes sense that it hangs together so well. They’ve got enough experience to take this simple thing and take it out, but it’s still going to be this certain thing. I remember when I first came to New York, Billy was teaching at the New School, which is where I went my first year in the city. So a lot of how I feel about him is from meeting him back then. He was always very kind to me, and a cool guy. I really enjoy his playing. He’s also part of a generation of players that has been pretty much overlooked. I ended up working a lot with John Stubblefield in the Mingus Big Band, [as well as] Ricky Ford, George Adams and Billy; they had that cool, post-Coltrane out thing that a lot of the younger generation hasn’t really heard. But then a lot of younger guys haven’t heard Paul Gonsalves, so that might be a better place to start [laughs]. But there’s a whole scene that I think is worth revisiting. I’m a fan of both these guys.

BEFORE: Wow. Most of the Lester Young I listen to is from a little later in his career. He’s so technically on here, executing such difficult saxophone things. I’d forgotten how burning he could be. I assume that’s with Basie’s band. From start to finish that’s killing. The rhythmic propulsion from everybody in the band is something I talk about with saxophone players in particular: Yes, the drummer and the bass player have to have a good time feel, but so does everyone. If everybody in the band knows how to move the music forward and swing like that, that’s when it really happens. There’s not a weak link there; it’s like a freight train. It’s also cool that you could feel it was popular music. People would dance to that. It would be hard not to.

As far as Lester Young goes, no one has ever played the tenor saxophone better than that. No one has found any better solution. Everything about his whole conception is complete; there’s nothing missing. One of my favorite records of all time is his trio record with Nat Cole and Buddy Rich. Just how he plays the melody to “I Cover the Waterfront” is so moving, so heartbreaking. He’s really painting the picture of his life. And when you hear this, this is like a celebration, a triumph. Like, let’s have some fun.

BEFORE: I really liked it. I was kind of wondering how long it would go on and where he would go with it. Actually, I could have heard a little more. He set a certain mood and then he played some really cool, I don’t even know what it was, a recurring pattern with those overtones. Then it ends on those atmospheric harmonics. That short saxophone piece really worked for me. I go to that zone from time to time with my own band, not like an entire set but maybe for an intro. But it seems that whoever this is has systematically got a whole lot of stuff together in a way I haven’t explored yet.

I have no way of knowing whether this guy can play “Giant Steps” at this tempo [snaps his fingers in a fast rhythm] and sound good or not. But that doesn’t matter. He wasn’t trying to do that. He was doing something else. There are so many things that can be expressed. Sometimes that feels like exactly what I want to hear, or Xenakis. It’s another approach to sound. The only way to gauge whether it’s good or not is if it says something to you. It can be pure sound, or it can be with harmony, or only rhythm. It can be organized in different ways, but it’s a little easier if I’m familiar with the language.

AFTER: I was wondering. It didn’t get into the frenzied energy zone that I usually associate with him. But that makes a lot of sense because whenever I hear Evan, I think his language is really highly developed. It’s very controlled. He’s found his parameters and he works within his language. He’s a serious guy.

BEFORE: It’s got that gospel, ’50s pop sound with that 12/8 piano. And the saxophone almost sounds like Albert Ayler-the full-throated, completely free saxophone sound with a little growl in it playing church hymns. There’s a line there. I’m not sure who it is. When I was a kid I didn’t like the saxophone that much. I’d hear this sort of thing and didn’t respond to it much. Maybe part of that was it was ’70s radio, and there were a lot of saxophonists then who didn’t have a good sound. But with this, now I get it. Boy, that’s some American music right there. And I hear the roots of the avant-garde in it. You’ve got to tell me, who was that?

AFTER: I don’t know him, but I like the phrasing and the sound and the rhythmic feel behind it. I’ve got to check him out.

BEFORE: The frame of reference I’m using is Sam Rivers and Jaki Byard. The drums and bass, I’m not sure. I would have assumed Tony, but he did some stuff at the end that I wouldn’t have expected Tony to do, some kind of Elvin-y stuff. But it’s at that very, very high level. As for Sam, I knew it had to be somebody from that generation who absorbed bebop in that way and then did something else with it. Those particular choices of how he plays out-because it’s out with surprising twists and turns-you’re not able to play out in that way unless you really know what in is. You don’t have that range of possibilities of how to mess with the harmony and how to mess with the rhythm and how to construct a line that surprising without knowing about how to play in. He did that stuff at the end with the chordal voicings, the clusters; that’s his thing. Great.

It’s amazing how modern this sounds, yet it has grounding in earlier language because that’s the generation they were from. And it’s a straight-up blues. The rhythm section was just laying it down with all this out stuff on top of it. It would be hard to find a modern rhythm section that would do that today, especially because we’ve all heard Tony and Ron in their other mode with Miles, where they were changing the texture a lot. But here the saxophone player and pianist are both taking it pretty out and the drums and bass are not. That added to the tension of the piece. If they were all going there it might have been great in a different way, but it wouldn’t have had that tension or grounding.

To read the rest of this story, purchase the issue in print or from the Apple Newsstand. Print and digital subscriptions are also available. Originally Published July 9, 2014

In line with many resourceful jazz practitioners, Gilad Hekselman responded to the enforced isolation of the COVID-19 pandemic with a turning-lemons-to-lemonade attitude that ultimately eventuated … END_OF_DOCUMENT_TOKEN_TO_BE_REPLACED

It was the 1950s. Bebop had established itself as the new paradigm of jazz, but its newest popular variant, “cool jazz” or “West Coast jazz,” … END_OF_DOCUMENT_TOKEN_TO_BE_REPLACED

Session players have always been my thing. Not to take away from the singers or bandleaders or what have you, but I’m more interested in … END_OF_DOCUMENT_TOKEN_TO_BE_REPLACED

Walter Smith III has been burning the candle at both ends. As he connected with JazzTimes via Zoom from a New York City hotel room … END_OF_DOCUMENT_TOKEN_TO_BE_REPLACED