Skip to content
Become a member and get exclusive access to articles, live sessions and more!
Start Your Free Trial
Home > Features > Before & After with Billy Hart 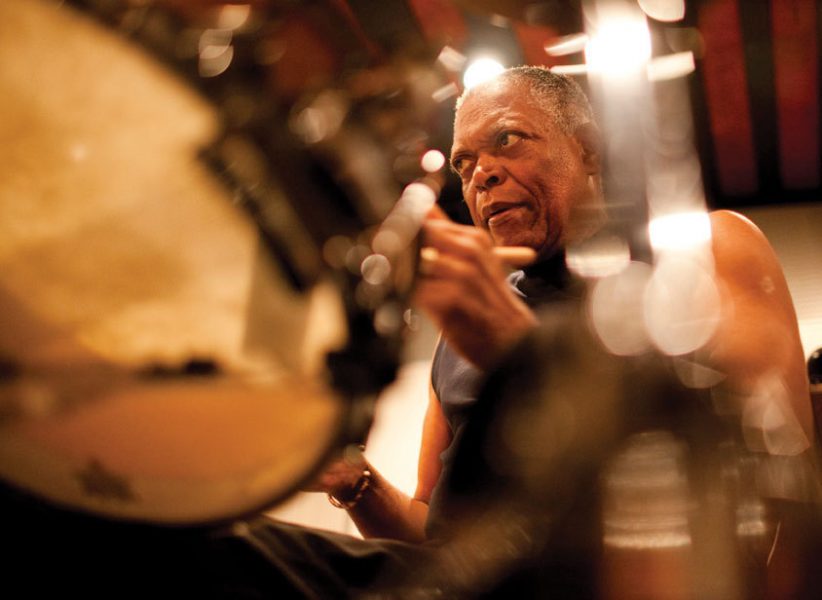 The resourceful and influential drummer Billy Hart’s youthful energy, compact frame, razor-sharp sensibility and self-deprecating sense of humor belie his 71 years. In addition to numerous high-profile sideman duties, Hart is currently teaching at Oberlin College and leading an adventurous band of younger musicians with a collegial, flexible hand. That group includes pianist Ethan Iverson, saxophonist Mark Turner and bassist Ben Street; their latest release is last year’s All Our Reasons, Hart’s first as a leader for the ECM label.

This Before & After session was conducted in front of a lively audience in the Billy Taylor Room at the Mid-Atlantic Jazz Festival, a Presidents’ Day weekend fiesta at the Hilton Hotel in Rockville, Md., just 15 miles north of Billy’s hometown of Washington, D.C. Befitting his stature as a drummer’s drummer, there were more than a few trapsmen in the house on that pleasant Sunday afternoon. Hart was at the festival for a matinee performance with the all-star assemblage known as the Cookers.

“The Walls Fall” (based on “Joshua Fit the Battle of Jericho”) (from Percussion and Bass, O). Jones, drums; Hinton, bass. Recorded in 1960.

BEFORE: Love it. How many guys can play brushes like that?! The style of drumming, at first I thought it was a younger drummer who knew an older style, somebody like Greg Hutchinson. But then I started thinking it was somebody that was a little older, maybe even as old as me. That could be anybody; I really wouldn’t know, but I could name some people. It makes me think of Freddie Waits. Strangely enough, I thought of somebody that very few people remember, like Redd Holt.

AFTER: Of course, the father of playing the brushes, besides all of the other things he innovated, was Jonathan “Jo” Jones. I just thought it was a younger person when in fact it was the person. I don’t care who it is, they would have had to play like Jo Jones to begin with. I remember talking to a young drummer that I’m very fond of named Marcus Gilmore. We were setting up onstage one time and I said, “Man, how you doing? What’s going on?” He said, “Man, I’m really inspired, I’ve been listening to Papa Jo!” That was his entrance into my being a fan, just by a young guy saying something like that.

AFTER: It’s definitely my age group. I should have been familiar with that record; I’ve heard some of it. I think of Jack DeJohnette as a phenomenon because I knew him before he moved to New York. I met him in Chicago, and in those days if he was thinking about playing the drums I had no idea because he was such a great pianist. In fact, the last time I saw him play in Chicago he had an organ gig and he was playing the organ and singing [chuckles]. So the first time I saw him in New York he was playing the drums with Sun Ra’s band, so I guess that was a Chicago connection. When I saw him, as he was walking up to me I looked at him and I said, “Man, what do you think you’re doing?” He was with Sun Ra, so he had the hat with the light on it [audience laughs] and he said, “Oh, I’m playing drums now.” And the rest is history. You couldn’t have said it any clearer than that because he’s definitely playing drums now!

BEFORE: My first feeling is that whoever it is thinks a lot like me-he likes Billy Higgins, like me. … That would be somebody like Winard Harper. I didn’t think it was Higgins but I felt like it was somebody that likes Higgins, or likes me [audience laughs].

AFTER: That’s funny: I tell people a lot that I play a lot like Ben also, and I always blame Buster Williams for that because we both played with Buster for many years at a time, and Buster’s father was not only a great bassist but a great drummer. So the rhythm that Buster plays really influences your cymbal beat; I tell a lot of people that I sound a lot like Ben because we have a similar cymbal beat. When you say Higgins, Ben was right in there too.

BEFORE: In this instance, I don’t know who it is, but it’s somebody who knows about the New Orleans dirge. It would also be somebody my age or somebody from that era who was also interested in Afro-Caribbean drums. This is the one [piece] that’s stumped me the most.

AFTER: Whoa! Dave is an interesting player. He’s a guy that is really interested in the instrument, but he somehow has chosen more of a path that we normally consider a pop music path. He seems to think of that as a philosophy. He loves contemporary music, but he only wants to play it from that way; he doesn’t necessarily want to play it from a Papa Jo Jones way or a Philly Joe Jones way. He really wants to play from the standpoint of a John Bonham, not even a Steve Gadd, more of a-for want of a better word-a rock perspective. But he wants to play contemporary acoustic music and he’s pretty convincing when you hear him live. That was heavy that he actually could play that New Orleans dirge like that; I couldn’t think of a young guy that could play that slow.

In line with many resourceful jazz practitioners, Gilad Hekselman responded to the enforced isolation of the COVID-19 pandemic with a turning-lemons-to-lemonade attitude that ultimately eventuated … END_OF_DOCUMENT_TOKEN_TO_BE_REPLACED

It was the 1950s. Bebop had established itself as the new paradigm of jazz, but its newest popular variant, “cool jazz” or “West Coast jazz,” … END_OF_DOCUMENT_TOKEN_TO_BE_REPLACED

Session players have always been my thing. Not to take away from the singers or bandleaders or what have you, but I’m more interested in … END_OF_DOCUMENT_TOKEN_TO_BE_REPLACED

Walter Smith III has been burning the candle at both ends. As he connected with JazzTimes via Zoom from a New York City hotel room … END_OF_DOCUMENT_TOKEN_TO_BE_REPLACED