Skip to content
Become a member and get exclusive access to articles, live sessions and more!
Start Your Free Trial
Home > Features > Before & After with Bassist Linda Oh 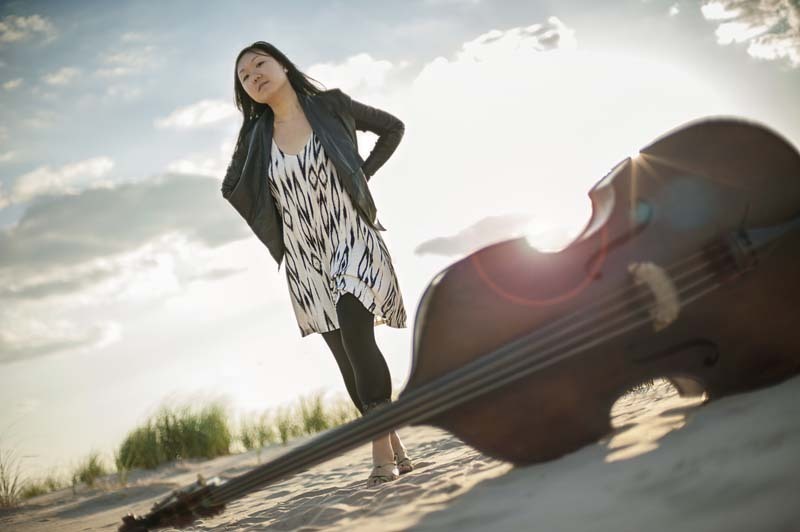 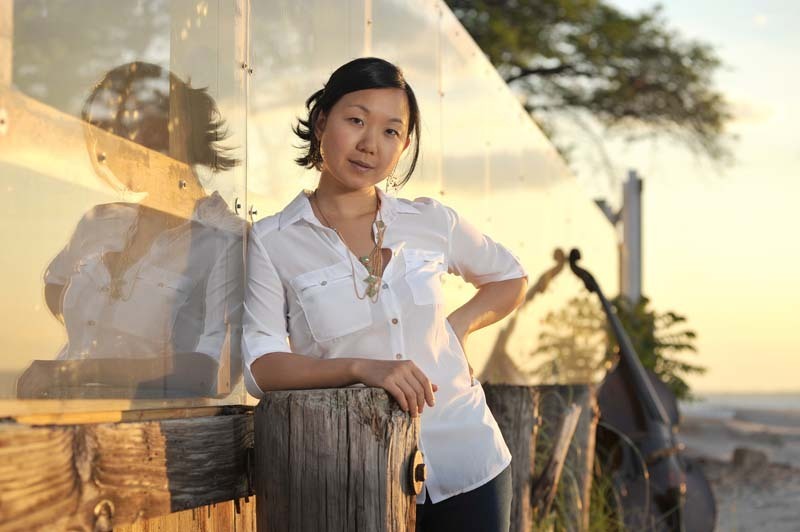 With Sun Pictures (Greenleaf, 2013), Linda Oh’s formidable third album as a leader, the 30-year-old bassist fulfilled the early promise of Entry, her 2008 debut. But she’s just getting started. Since moving from Perth, Australia, in 2006 to pursue a master’s degree at Manhattan School of Music, Oh has quickly become a first-call sideman on the New York scene. Lately, she has anchored the rhythm section in Dave Douglas’ quintet and the Wayne Shorter-inspired quintet led by Douglas and Joe Lovano, Sound Prints, in addition to dates with Geri Allen, Greg Osby and frequent collaborator Fabian Almazan, who featured her on his recent sophomore release, Rhizome (Blue Note/ArtistShare).

Oh’s playing is marked by a bottomless resonance and a lyrical sensibility inspired by Scott LaFaro and Charlie Haden. She has also championed the bass as a frontline instrument, with tastes ranging from ingenious pop covers to original work that reflects her background in Eastern classical tradition. Between gigs with pianist Pascal Le Boeuf and vocalist JD Walter and a show at the Blue Note in New York in early August, Oh sat down for her first Before & After, holding forth on Korean Pansori singing, barefoot running and the time she met Red Hot Chili Peppers bassist Flea.

BEFORE: It’s Monk. Is that Charlie Rouse? What tune is that? It has a super-strong beat. I can’t tell who it is. It feels great, though. I’m definitely loving the drum-and-bass connection. It sounds Elvin-y. That bass solo has the grit and fearlessness of Mingus. There aren’t many bassists I can think of who can go up to that high A. Is it Sphere?

AFTER: Wow. I did think it was Monk. The sax player, Paul Jeffrey, I’m not too familiar with. It’s interesting with Dave Holland on bass, because one thing is the walking feel feels a little bouncier than usual-more skipped notes, that sort of thing. That’s just an aesthetic point.

I’ve never heard this before. I transcribed a lot of Dave Holland’s stuff, mainly from the quintet era. My introduction to him was definitely through Conference of the Birds, and from that point I got a bit obsessive with the quintet and his various other projects. There are so many great records he’s on. That trio [record] with Pat Metheny and Roy Haynes, Question and Answer, is one of my favorites-or with Bill Frisell and Elvin Jones. He’s so versatile but he’s got his own thing, and all the stuff he did with Miles in addition to his own stuff is pretty incredible. How old would Dave have been then?

BEFORE: I think I know what this is. This is the Charms of the Night Sky band with Greg Cohen. Greg’s one of my favorite musicians, and Dave too; he’s so prolific and such a great composer. This is definitely one of my favorite bands-just the textures. Greg’s always got such a great groove and a great sound, and it’s so interesting to me how easily he can slot into something like this and his stuff with Masada and John Zorn, and then with Tom Waits. Stylistically he’s such a strong musician and bassist. He was one of the first people I met and studied with when I came to New York. He was so giving, and he still is. And you can’t beat Greg’s feel.

He’s also a hilarious guy. Mark Feldman, too. I met him at [the Banff International Workshop in Jazz and Creative Music] my first year when I went to study there in 2007. He was one of my combo directors for one of the weeks, and just so clear with everything. No beating around the bush, just getting right to the point.

BEFORE: I like how present the bass is. Is this “Some Other Time”? I love the sax sound; it sounds very familiar. It reminds me of Joe Lovano. Is that him? Is it Paul Motian? It’s beautiful. I was going to say Bill Frisell, but I’m not sure.

AFTER: Of course! I thought it might have been Joey, but it was hard to tell. Drew Gress is one of my favorite players. He was one of the first people I took a lesson with when I came to New York. I don’t think he remembers, though. He was great. We played a bit, and he listened to some of my compositions, and he was so to the point. He really took care of some fundamental basics that I needed to hear. I can hear Joey playing now. The bassline is a little darker than what I associate with Drew on his Fred Hersch stuff and on his own stuff. It’s beautiful, though.

BEFORE: I dig how present the bass is again. It’s Jen’s duet with Mark Dresser. It’s a beautiful album, and it’s been a little while since I’ve checked it out. I have huge respect for Mark and just how knowledgeable he is about the actual instrument and all the stuff he does with harmonics and false harmonics. He’s got a great DVD out that I think a lot of bass players should really check out, the Guts DVD. He talks a lot about Stefano Scodanibbio, a classical bass player who has some great solo bass stuff. It’s pretty incredible what both Mark and Stefano can do on solo bass, just with the bow and the use of harmonics. It really does sound like more than one instrument.

I love Jen. She sang on my second album, and she’s such a pro. I just saw her a couple weeks ago, randomly, when I went to see Adam Rogers at the Jazz Standard and she was there. I hadn’t seen her since I hung out with her in Seoul, because she’s studying Pansori singing and I got to sit in on one of her lessons with a great Pansori singer, Bae Il-Dong. I got a bit teary during that lesson. She’s a great inspiration, definitely. I’m bummed I missed her show at [Brooklyn performance space] Roulette a few weeks ago.

BEFORE: It reminds me of the Korean gong. I love those overtones. Is this Australian? The gong reminds me of Simon Barker. I used to take Skype lessons with him. Is this Driftwood? Now it’s all making sense. I bought this. I love Simon. He’s one of my favorite Australian drummers. He’s got such a different thing happening. The first time I saw him live was when I was in Australia and he was playing with the Matt McMahon Trio in Brisbane. But I had seen a documentary called Intangible Asset No. 82, which is directed by Emma Franz, who is from Perth, who is a great filmmaker and she’s also a vocalist. I met her on a wedding gig years and years ago in Perth, and she was singing. Anyway, I’d seen that documentary and I’d taken some Skype lessons with Simon, and we actually got to play a couple of collaborations in Gwangju with some musicians from Korea and Japanese-born Korean people as well. A great janggu player, Young-Chi Min, Young-Na Kim on haegeum and Hakuei Kim on piano.

Simon’s super inspiring. Everything from his musicianship to … this guy runs like 20 kilometers each day. He runs barefoot. There’s a crew of Australian musicians who do barefoot running in cities, not just out in parks. He’ll do this in Seoul. We were staying in Gwangju, and he ran uphill, and if I remember correctly, it was 20 kilometers uphill and back down with a banana in each hand, so that when he got to the top he would eat the bananas and then come down. Jen Shyu arrived a couple days after that, and Simon gave us a tutorial on how to barefoot run. But Simon’s inspiring. He’s been back and forth to Korea, learning traditional rhythms, and he’s what inspired me to start checking that stuff out. I’ve taken a few janggu lessons so far, but we’ll see how it goes.

In line with many resourceful jazz practitioners, Gilad Hekselman responded to the enforced isolation of the COVID-19 pandemic with a turning-lemons-to-lemonade attitude that ultimately eventuated … END_OF_DOCUMENT_TOKEN_TO_BE_REPLACED

It was the 1950s. Bebop had established itself as the new paradigm of jazz, but its newest popular variant, “cool jazz” or “West Coast jazz,” … END_OF_DOCUMENT_TOKEN_TO_BE_REPLACED

Session players have always been my thing. Not to take away from the singers or bandleaders or what have you, but I’m more interested in … END_OF_DOCUMENT_TOKEN_TO_BE_REPLACED

Walter Smith III has been burning the candle at both ends. As he connected with JazzTimes via Zoom from a New York City hotel room … END_OF_DOCUMENT_TOKEN_TO_BE_REPLACED