Skip to content
Become a member and get exclusive access to articles, live sessions and more!
Start Your Free Trial
Home > Features > Before & After with Ambrose Akinmusire 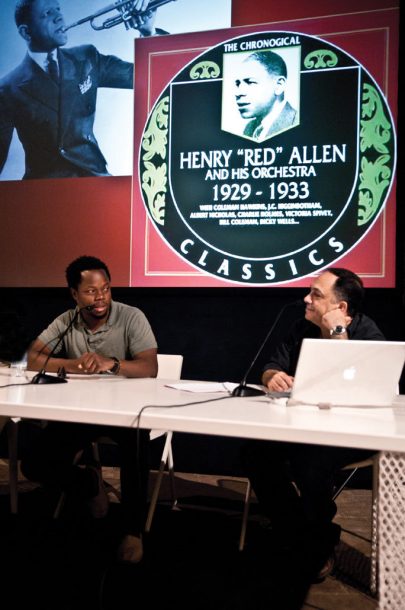 At medieval chamber built from stone and located a hundred feet or so below street level may not seem like the ideal place to discuss jazz recordings in front of an audience. But Umbria Jazz, one of Europe’s leading summer festivals, has never been shy about repurposing the historic sites of Perugia, Italy. On a mid-festival afternoon, while the midday sun blazed overhead, about 40 jazz enthusiasts took an escalator down to the cool, lower level of the Rocca Paolina-a fortress erected on Papal order in 1540 with an incredible, bloody story all its own-to hear Ambrose Akinmusire participate in his first Before & After. In many ways, the exercise seemed tailor-made for him. “If I hadn’t played an instrument I would be a music nerd,” the trumpeter confessed while noshing on organic Umbrian food at the public reception held after.

No kidding. Akinmusire correctly identified 10 out of 11 tracks, most within a few seconds. His ear for pianists is particularly impressive, and his commentary revealed the respectable extent of experiences that the 30-year-old has already accrued. Later that evening in Perugia’s Teatro Morlacchi, Akinmusire headlined a well-attended midnight concert with his current quintet: saxophonist Walter Smith III, pianist Sam Harris, bassist Harish Raghavan and drummer Justin Brown.

Recently I was at a café wrapping up a day by reading Edwardian ghost stories, bored by the music on the sound system and not … END_OF_DOCUMENT_TOKEN_TO_BE_REPLACED

“I live close to the ocean here in Los Angeles, so I’m surfing pretty much every day, and fortunately my family is close by—my folks, … END_OF_DOCUMENT_TOKEN_TO_BE_REPLACED

When I started to put this list together, first I wanted to think about the harmonica players that had an impact on my playing, on … END_OF_DOCUMENT_TOKEN_TO_BE_REPLACED

Zodiac Suite (Asch, 1945; reissued by Smithsonian Folkways, 1995) Williams’ masterpiece is both an impressionistic representation of the signs of the zodiac and a striking … END_OF_DOCUMENT_TOKEN_TO_BE_REPLACED