Skip to content
Become a member and get exclusive access to articles, live sessions and more!
Start Your Free Trial
Home > Features > Before & After: Andy Bey 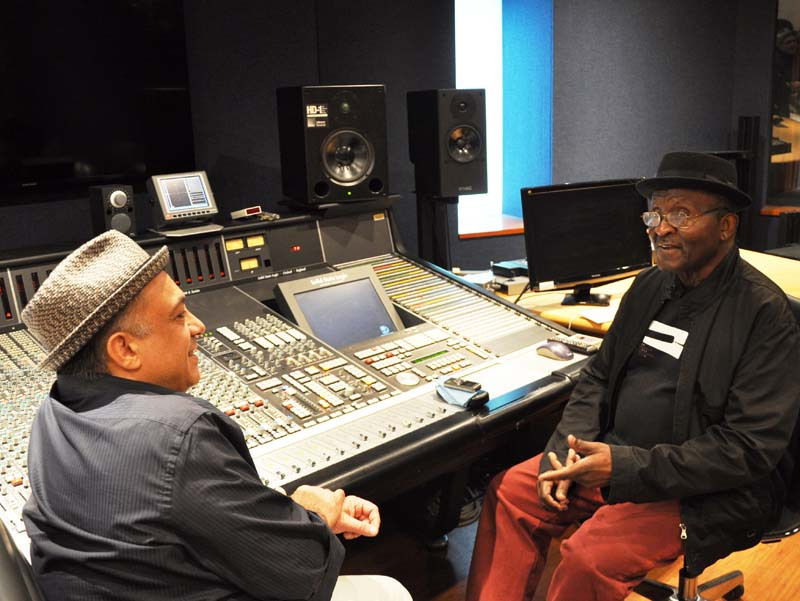 At the age of 77, Andy Bey is one of New York City’s best-kept secrets. Those who know, know, but he’s not one for self-promotion or career building. His albums, like 2014’s Pages From an Imaginary Life, are filled with down-tempo treasures, yet they arrive at an irregular pace. He resists almost all invitations to tour. Local gigs pop up with minimal announcement, the vocal maestro most often accompanying himself on piano in small venues that sometimes seem incongruous relative to his stature and talent. A marked exception was a two-set evening at the Greenwich Village piano bar Mezzrow this past January that was immediately followed by the winter’s worst snowstorm-a forecast that did not dissuade a dedicated 30 or so fans from filling the small room. Choosing standards and confessional originals from a dog-eared notebook, Bey sang and played, and time stood still. Each song ended with lingering silence, no one in the room wishing to break the spell. Then applause would erupt.

This is Bey’s first Before & After, an exercise tailor-made for a man who seems able to recall almost every song he has sung or heard. And over the years he has heard and sung a lot: as a child accompanying his parents to church and to various theaters and clubs in his hometown of Newark, N.J.; performing as a teen star in Harlem in the ’50s; touring with his family group, Andy and the Bey Sisters, in the U.S. and Europe in the ’60s; and singing in bands led by Horace Silver and Gary Bartz in the ’70s. Then, after a hiatus of roughly a decade and a half, he returned in the mid-’90s with a series of career-defining albums-Ballads, Blues & Bey, Shades of Bey, Tuesdays in Chinatown-that have established him as a (or perhaps the) pillar of the jazz baritone singing tradition.

BEFORE: Is that José James? Yeah, I like his sound. I met him at the New School [in Manhattan] about four or five years ago and he wanted to study with me. What I told him was, “Don’t concentrate so much on being a jazz singer. You have a beautiful, very natural sound, and just work with that.” I like him when he’s doing stuff like this. It’s cool because he’s not trying to deal with chords or trying to be too musical-he already is musical, just singing it straight. His sound is the thing that resonates.

I’m aware of this album, but I haven’t heard the whole thing. His take of “Lover Man” is interesting because he just says “Lover”; when I did it, I would say “Lover Girl.” José made it freer for a man to sing it, especially for a gay or straight man.

Is that a challenge, covering a song written from a woman’s perspective, like some of Billie’s?

I think you have to respect the concept of what she was trying to do. But you never do Billie Holiday as Billie did, because you can’t understand what she dealt with-what her life experience was that she brought to the music.

Anybody can walk onstage and say, “I’m a jazz singer,” or “Hey, I’m doing jazz.” Or you can get in a class and study this music, but it’s about on-the-job training. You have to get on the bandstand and sing with a bunch of musicians and fall flat on your face a few times and be willing to get back up again. It’s not about learning a few hot licks, and then singing with a five-octave range and you’re going to conquer the world.

BEFORE: That’s Jimmy Rushing-Mr. Five by Five. He had a beautiful tenor voice and a certain kind of timbre. Nobody could do what he did. He could sing extremely high and he could swing. He was one of the great ones.

I had forgotten that monologue he did on this tune until I heard “Tricks ain’t walking no more…” It might have been well known, [but] I didn’t know it at that time because I was still a youngster; even my parents wouldn’t have known what this was about-a prostitute, of course. Sex can be very humorous, in its own way.

I first met Jimmy with my sisters when I was on [the television program] Spotlight on Harlem, when I was around 12. I had a chance to sing a solo and Jimmy was the guest star that week. The next time we met was when we were going to Europe in 1958 on the [ocean liner] Ile De France, again with my sisters. We were singing on the boat. He was very nice, and we were young and a class act: I had my little tuxedo, my sisters had their gowns that one of my older sisters used to make, and we had our little arrangements.

I got to know Jimmy better that time. He told me stuff about Count Basie and how that band had so much life and energy with Lester Young and Harry “Sweets” [Edison], and Jo Jones of course. He reminisced a little bit but was dealing with his own stuff by that time.

BEFORE: Oh yeah! That’s Carmen McRae and Betty Carter live in San Francisco. I got this album. I’ve seen Betty and Carmen many times. I’ve seen Betty singing in little dives, but it was always about the music. I was pretty friendly with her in a sense. She was a little hard sometimes; so was Carmen. They both knew me from New Jersey. Betty Carter used to play at a little club in Newark called Len & Len’s, and there was another club where I first met Carmen.

People talk about Carmen and Betty [having] pitch problems, but that’s bullshit. Betty Carter had to have relative pitch in order to do the things she did. The same with Carmen. On their earlier records they sang right on the note, but it’s not about having perfect this or being perfect that. What about Billie Holiday? She might have sung sharp in some ways, but it’s about that feeling of life in the music.

Betty had a way of singing, it was almost like she was making fun of certain things. It got even more beautiful in the end, when she did that album Feed the Fire with Geri Allen, Jack DeJohnette and Dave Holland. Nobody could scat like Betty Carter. She had her own language and concept; they were all intertwined with how she swung and how she could get dynamics out of a band. She was a total musician: She knew theatre, she could play piano and she was the only one that took scatting to another level after Ella.

BEFORE: Is that the Double Six of Paris? I met some of them in Europe when me and my sisters were living in Paris for almost a year-all of ’59, up to my 20th birthday, and we didn’t come back home until 1960. When we first got there it was September the 10th, 1958, and I was still 18.

That’s “Boplicity.” I love that tune. There are some lyrics that Mark Murphy used to sing [to that], but they’re singing this in French, of course. It’s clever but it doesn’t really grab me or make me want to pop my finger. I’m not spitting at it; I can respect it from a musical standpoint. Every note is sung perfectly, but it’s not a question of good or bad: It’s got to get beyond the so-called perfection.

You can hear where they’re coming from. It all started with Eddie Jefferson doing “Moody’s Mood for Love” in ’52, then King Pleasure did it a little later with Blossom Dearie doing the second part: [sings] “What is all this talk about loving me, my dear…” And then Lambert, Hendricks and Ross came along in 1956. The Double Six might have made it in the States but they didn’t necessarily have to, because they were big in France and Christiane LeGrand’s brother Michel was big over there, too. He was doing a lot of movie soundtracks in the ’50s and ’60s and using them, so they were doing fine.

BEFORE: I’ve got this record. I knew Jimmy Scott since I was a kid-that’s how far we go back. He was a little older than me-he was born in 1925 and I was born in 1939-but I was always aware of Jimmy and always loved him. When he was younger, he used to play at a club in Newark on the weekends called Lloyd’s Manor. He had amazing pipes back then. Later in the ’60s I took George Wein, when he used to manage me and my sisters, down to hear Jimmy playing at a club called Frederick’s Lounge, and he was still in his prime then.

Joe Farnsworth, whose drumming has been the driving wheel in bands led by McCoy Tyner, Benny Golson, Harold Mabern, and Pharoah Sanders, is coming to … END_OF_DOCUMENT_TOKEN_TO_BE_REPLACED

Recently I was at a café wrapping up a day by reading Edwardian ghost stories, bored by the music on the sound system and not … END_OF_DOCUMENT_TOKEN_TO_BE_REPLACED

“I live close to the ocean here in Los Angeles, so I’m surfing pretty much every day, and fortunately my family is close by—my folks, … END_OF_DOCUMENT_TOKEN_TO_BE_REPLACED