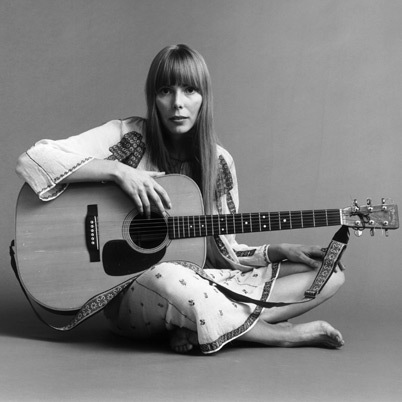 My path to the music of Joni Mitchell was a bit unconventional. Unlike many of my peers, I was not a teenage Mitchell devotee. I became obsessed with jazz in my teens so while many of my contemporaries were listening to Blue and Ladies of the Canyon, I was listening to Kind of Blue and A Love Supreme. As time went on I moved from my original interest in instrumental Jazz to the vocal greats-Ella, Sarah, Billie, Nat, Sinatra …

With the release of Joni’s 2000 standards album Both Sides Now the world I had been living in had a head-on collision with Joni Mitchell. And that collision led me to look back at her earlier work.

This album was Billie’s favorite of her work and though I can’t quite get behind the chorus in the background, it’s amazing singing.

You can hear that Joni knows Billie’s vocal but (here come the thunder claps) I prefer Joni’s version: the emotion, the phrasing, the acting and, of course, Vince Mendoza’s ridiculous arrangement. I’m listening again now and getting chills. Oh, yeah, there’s always Wayne’s solo … for the jazz purist.

My favorite track on the album (of many, many favorites). Usually makes me actually weep. You cannot overlook Joni’s taste in collaborators. Wayne Shorter, Vince Mendoza, Peter Erskine on drums … she hears and chooses the very best in jazz. And listen to Wayne’s edgy, emotional solo.

Listen to the words of this song. As a jazz singer who has so many underappreciated friends in Los Angeles, this one also made me cry a little. This is written by someone who deeply appreciates musicians and knows that the greatest ones are often unheralded.

OK, jazzer haters, try singing along with Joni and learning this melody and Joni’s brilliant lyric. For real! I wish you luck. It took me months. Peter Erskine suggested it for my Joni project (he’s playing here-deeep groove!) and I thought “a Blues in Bb … no problem!” I had to slow down and just transcribe every bar, every note and rhythm, and then learn it. And of course Jaco’s playing and horn arrangement! Off the hook. (In my version I had to slow it down.)

Again, it’s all fun and games to criticize until you actually try to sing what she’s singing! This melody is so difficult and she nails it. And I say this as someone who sings Jimmy Rowles’ “The Peacocks” and Bill Evans’ “Very Early.” If you want to gain a little more respect, check out the video or live CD Shadows and Light made at the Santa Barbara County Bowl in 1980. She’s with Jaco, Michael Brecker, Pat Metheny-I mean, damn!-and she is right with them. Her singing is sublime and her version of “Porkpie” on this is really something. Plus, Jaco does an instrumental solo interlude. Wow!

I am including this because learning the lyrics and trying to remember them made me realize just how carefully and perfectly crafted they are. To show you what I mean, check out the patterns used in the lyrics of Porter’s “It’s Alright With Me” and Joni Mitchell’s “All I Want.” Joni’s internal rhymes and flowing references remind me of Porter-but they are advanced calculus to Porter’s perfect algebra.

1. “It’s the wrong time and the wrong place. Though your face is charming it’s the wrong face. It’s not his face but such a charming face, that it’s alright with me.”

2. “It’s the wrong song in the wrong style. Though your smile is lovely it’s the wrong smile. It’s not his smile but such a lovely smile that it’s alright with me.”

3. “It’s the wrong game with the wrong chips. Though your lips are tempting they’re the wrong lips. They’re not his lips, but they’re such tempting lips.”

Joni Mitchell: “All I Want” lyric excerpt (choruses only):

And all of this leaves out the discussion of Joni’s vocal excellence-pitch, time, diction, phrasing-in all phases of her career.

Of course there are the obvious “Jazz/Joni” choices. I absolutely love Diana Krall’s cover of “A Case of You” and I chose not to do one on my project because I felt it had been done so many times well already. The same with “River” and a few others. I’ve always loved Kate McGarry’s version of “Chelsea Morning.” There is so much for jazz lovers in the work of Joni Mitchell and I’ve come to believe that we all go through our “Joni Mitchell phase”-some at 16, some at 40 (me), some at 90.

If you haven’t yet, I suggest you start yours today.

What’s one of the best ways to make a jazz fan for life? Start early. The books listed below can help, and they’re just 10 … END_OF_DOCUMENT_TOKEN_TO_BE_REPLACED

I did not start seriously writing lyrics until I was in my thirties, at which time the endeavor became the centerpiece of my life. Following … END_OF_DOCUMENT_TOKEN_TO_BE_REPLACED

Nnenna Freelon recently released her 11th album and first studio album in a decade, despite—but also, in a sense, because of—her personal travails of the … END_OF_DOCUMENT_TOKEN_TO_BE_REPLACED

What better way to celebrate the 50th anniversary of a music magazine than by making a top-50 list? Given how much time we’re spending at … END_OF_DOCUMENT_TOKEN_TO_BE_REPLACED