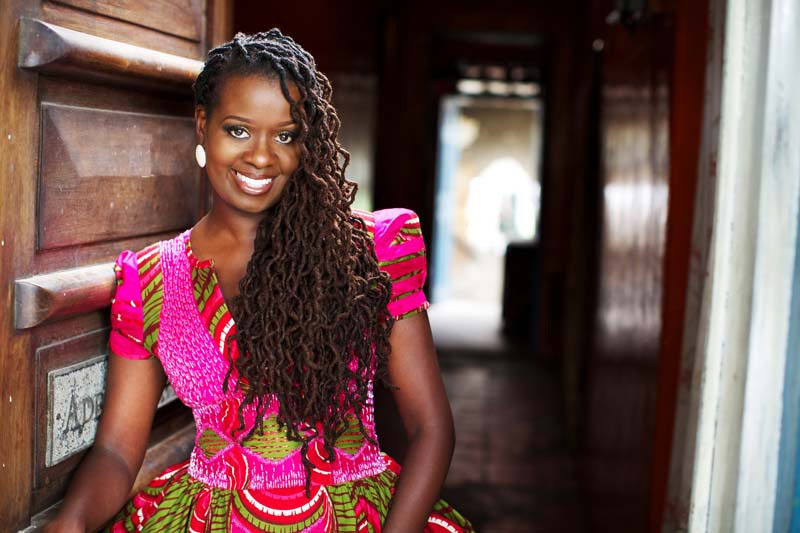 As an East African vocalist and songwriter who came of age in the American Midwest, my creative process has always been about searching for the in-between. How do I convey the here and the there-the America and the Africa-in me? Thankfully, there are musicians on both sides of the Atlantic who’ve taught me that I could create a sonic world infused with both my African heritage and Western influences.

When we reflect on the longstanding relationship between African music and jazz, it always feels like some sort of chicken-and-egg conversation that begs to move beyond blue notes and polyrhythmic sensibilities. To me, there is a cultural and political construction of global black identities that sits firmly inside of the jazz idiom as well-mostly because there is a specific type of freedom in the music, a specific type of knowing and pain that resonates deeply with black communities around the globe. This is not to say that jazz has not beautifully evolved into a global music expressed by all cultures and ethnicities; it is merely to celebrate the perpetual exchange between the African continent and her diaspora. The following is a very short list of African vocalists whose work inspires me to keep reaching for wholeness and home-wherever that might be.

Picking just one Makeba tune is tough for me to do, as the late South African singer and activist is one of my favorite artists of all time. This song is a selection from one of my favorite Makeba albums. (You can hear her then-husband, a very young Hugh Masekela, singing background all over it!) I’ve always loved the equally delicate and fiery tonality of Makeba’s voice. Here the elasticity of her voice is evident, as she improvises freely over light guitar, percussion and a rhythmic poly-vocal chant. Always laidback, always in control, always beautiful and true.

Richard Bona is originally from Douala, Cameroon, a city that is known for churning out Africa’s most talented bass players. Soon after arriving in the West, he cemented his place as one of the most virtuosic bassists of our time. Aside from his work as an instrumentalist, I really love the gorgeous bell-like quality of his voice. This song is a selection from his very first studio album. Here he offers a lullaby-esque melody in his native tongue, while the tasteful voicings of a piano seem to answer him just as sweetly. I’ve been moved to tears every time I’ve heard him sing it live.

This is a cover of an Afropop standard originally sung by Cameroonian vocalist Bébé Manga in the 1980s. Here, fellow Beninese artists Lionel Loueke and Angélique Kidjo team up to offer a wonderful duo version of the classic song. On guitar and vocal percussion, Loueke reharmonizes the chords while Kidjo improvises on the original melody with tasteful restraint. To anyone familiar with the original, this is a wonderful interpretation that honors the joyful spirit of Bébé Manga.

This is my absolute favorite song by the legendary Hugh Masekela. It pays homage to the black miners of his native South Africa and the suffering they endured through the apartheid era. Known mostly as a trumpet and flugelhorn player, Masekela offers a powerful vocal performance here that builds from a simple clave and rock-steady guitar vamp to a percussion-driven emotional frenzy. It is both magical and moving.

On this song, Tunisian vocalist and oud player Dhafer Youssef transports the listener to a place of immediate intimacy. Framed by a slow-moving trio, he allows the music to breathe long and wide before he finally enters with a hauntingly ethereal North African melody. Youssef then sings with a mysterious grace, gliding from the lower notes of his range through microtonal scales and toward a piercing, crystal-clear falsetto. In the end, the song insists that you breathe as deeply and slowly as it does-which is all you’ll want to do, anyway.

There is a raw beauty about Ethiopian vocalist and songwriter Meklit. Her voracious musical appetite is always evident, and she manages to honor her heritage while remaining fiercely original. I adore this remake of an Ethiopian folksong that celebrates a lover’s Afro. In it, Meklit creates a modern electro-acoustic soundscape while nodding to Ethio-jazz horn sections and rhythmic traditions. Kinda makes me wish I had an Afro, too.

Ever since I was in the 7th grade, I have had a passion for jazz. I have always listened to and enjoyed a wide variety … END_OF_DOCUMENT_TOKEN_TO_BE_REPLACED

“My overall goal is trying to figure out how to connect the languages of jazz and classical to make an interesting and engaging performance, and … END_OF_DOCUMENT_TOKEN_TO_BE_REPLACED

We calculated our top 40 new releases of 2022 based on year-end lists by our writers. They were asked to choose the 10 best new … END_OF_DOCUMENT_TOKEN_TO_BE_REPLACED

We calculated our top 10 historical/reissue recordings of 2022 based on year-end lists by our writers. They were asked to choose the five best historical … END_OF_DOCUMENT_TOKEN_TO_BE_REPLACED