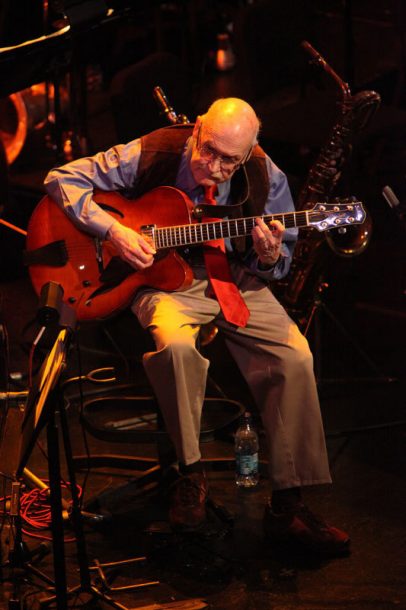 When I was asked to select 10 tracks by a favorite jazz artist, it was pretty easy to pick the great guitarist and improviser nonpareil Jim Hall. What I wasn’t ready for was just how difficult selecting those 10 tracks would be! I surrounded myself with some 30 favorite recordings, mostly with Hall as the leader. Perhaps some readers familiar with my generally very non-Jim Hall guitar playing are wondering why I chose him. Perhaps you are thinking that opposites attract. The reason is because Hall has, since the 1950s, been a paragon of taste, tone, creativity and inventiveness. These qualities have kept Hall’s music pushing forward: never stale, often surprising.

My first experience with Jim Hall’s music was listening to recordings by this wonderful trio from the mid-’70s with Canadian wizards Don Thompson (bass) and Terry Clarke (drums). This version of “Secret Love” shows the absolutely beautiful way Hall interprets sweet song material such as this. Few players, if anyone, can match what Hall does over a major-seventh chord. There is so much understatement with so much nuance and restraint, but without the playing ever sounding anything less than probingly lyrical and memorable.

This gorgeous meeting of two melodic and harmonic giants never ceases to be rewarding. “My Funny Valentine” can be one of those tunes that sets dyed-in-the-wool jazz cats to groaning. But this version is blithely swinging-almost jaunty-with rhythmic invention and drive that one does not associate with this generally torchy song. The comping alone is exhilarating to listen to: Evans drops dozens of tiny chord stabs; the two dart around the groove and each other with unerring and relaxed swing. Hall’s solo is a treasure trove of classic jazz improvisation at its best-on any instrument.

This session features some of the most hair-raisingly adroit up-tempo swing recorded after the boppers cranked up the metronome a decade earlier. I have selected the leadoff track, “Without a Song,” because, beyond the amazing solos, burning tempo and delightful exchanges in evidence here, Hall’s comping astonishes; his accompaniment, along with the soaring rhythm section, drives the track to spectacular heights. Make no mistake about it: This guy can drive a band strumming a guitar like some sort of demonic 1930s big-band guitarist on Gypsy/samba pills.

Another Japanese LP, again with the classic ’70s trio of Thompson and Clarke, this record consists of original compositions/improvisations only-no standards. The results are marvelous. “Kyoto Bells” starts with Hall’s harmonics and then blazes a trail that is absolutely smokin’. But I also include it to point out that Hall has often used the idiomatic elements of the guitar as part of his sonic palette, and the results are consistently stimulating and profound.

“Prelude to a Kiss”

Alongside bassist Ron Carter back in ’73, Hall plays so quietly on this live recording that it’s a wonder you can’t hear every tangential conversation in the room! This gorgeous version of the Ellington classic showcases so many of Hall’s remarkable musical traits: the amazing, lush chording; the at times polyrhythmic melodic sequencing that extends over the bar lines as he seeks that perfect resolution (which doesn’t always come-Hall’s courage and risk-taking are part of his genius); and his ability to blend straight and swing feels in an almost eccentric way.

Again with the ’70s trio of Thompson and Clarke, here is another virtuoso display of visionary artistry: the melodic/polyrhythmic sequencing, puckish song quotes and maddeningly wonderful chords and chord soloing. And here I must mention one of my pet terms for Jim Hall: King of the Bridges. I don’t know what it is, but the bridges to classic standards seem to set him off. One can almost invariably be inundated with a staggering outpouring of classic Hall invention come The Bridge.

Another live recording, it is included here mainly for two reasons: One is to mention another crafty original Hall composition; the other is Red Mitchell, to my mind one of the greatest jazz bassists. The matchup of Hall and Mitchell was stellar. This beautifully recorded album has among its treasures this Hall original called “Waltz New,” which opens with a breathtakingly effortless assaying in octaves of the tune’s serpentine melody, and cool changes reminiscent of “Someday My Prince Will Come.”

Another track from this scarce record, selected as an example of Hall’s recognizable and sophisticated composing. This slinky line, a twisty and ultra-hip blues, may have been the unconscious inspiration for my own piece dedicated to Jim Hall, “Blues, Too.” Listen as Hall changes the timbre of his guitar by playing certain passages at the bridge for a more nasal tone. Hall takes things pretty far out there on this track. Ultra-dense and modern chords, many of them arrived at by the cogent use of open strings, clang and skitter around.

Every track on this record is great, and many of them, like the title track, are forward-looking, far-reaching and wholly satisfying on many levels. The piece “These Rooms,” another Hall original, is a sort of chamber-jazz suite wherein the quartet is broken down into various smaller units, solo cadenzas occur, and the whole thing ends up in a funky New Orleans groove that I dare you to avoid tapping your foot to.

To showcase Hall as composer/orchestrator/large ensemble leader, I submit to you “Passacaglia,” from an album of Hall compositions for guitar with (variously) brass ensemble, string orchestra and string trio and featuring guest soloists like Joe Lovano and Claudio Roditi. This piece is so beautiful, so brilliant and so inventive: dynamic and probing and moving and unlike any jazz-related composing you may have heard! The piece is a sort of concerto for string orchestra and acoustic archtop guitar. It’s haunting, and listening to it often gives me chills.

In line with many resourceful jazz practitioners, Gilad Hekselman responded to the enforced isolation of the COVID-19 pandemic with a turning-lemons-to-lemonade attitude that ultimately eventuated … END_OF_DOCUMENT_TOKEN_TO_BE_REPLACED

It was the 1950s. Bebop had established itself as the new paradigm of jazz, but its newest popular variant, “cool jazz” or “West Coast jazz,” … END_OF_DOCUMENT_TOKEN_TO_BE_REPLACED

Session players have always been my thing. Not to take away from the singers or bandleaders or what have you, but I’m more interested in … END_OF_DOCUMENT_TOKEN_TO_BE_REPLACED

Walter Smith III has been burning the candle at both ends. As he connected with JazzTimes via Zoom from a New York City hotel room … END_OF_DOCUMENT_TOKEN_TO_BE_REPLACED