Skip to content
Become a member and get exclusive access to articles, live sessions and more!
Start Your Free Trial
Home > Features > Artist’s Choice: Jacky Terrasson on Piano Players You Know Right Away

There are certain pianists that just can’t hide—not that they would want to. I’ve always been fascinated by those who have developed such a strong identity. Commonly, people say they have their own style, but there is so much more at stake. Key elements would be touch, phrasing, language, sense of time and swing, orchestral visualization, harmonic approaches, and of course heart and guts. I’ve chosen eight “easy” examples to make this obvious, but the list goes on and on and has carried into my generation (Brad Mehldau, Gonzalo Rubalcaba, Fred Hersch, Robert Glasper, etc.).

Listen to a Spotify playlist featuring all the songs picked by Jacky Terrasson for this Artist’s Choice:

Ahmad Jamal
“Poinciana”
Ahmad Jamal Trio at the Pershing: But Not for Me (Argo, 1958)

A personal favorite for two important reasons. Mr. Jamal, who possesses a brilliant technique, has shown us what “less is more” means—the right choice of notes at the right time with the right expression, and it’s all there, even if we’re only talking about a few notes. I can definitely hear how Miles Davis brought that concept into his early quintets. Another thing is, some pianists not only cultivated their own sound but pushed the envelope even further by creating a band (here a trio) sound. This might be a perfect example.

Eloquence is the word that comes to mind. Bill Evans really developed his own language and redefined the voicings of chords. Hear how he just goes and goes and tells his story with his own words (notes) with such ease and fluidity. How romantic too. 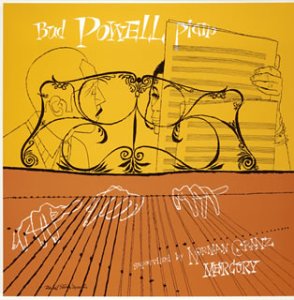 The quintessential bebop pianist. Of course, there were many, but Bud Powell had this light, this fire, this amazing furious energy. Yet always, his lines are very clear. I know I’ve used the word “eloquence” before, but here again, when a writer uses the right word to make that to-the-point phrase … Also listen to his solo on “Body and Soul”—how perfect is that!

Yep! Notice the title of this is pianists, not jazz pianists. Some of my friends, whether they play or not, and some music critics have criticized Gould’s playing of J.S. Bach for being too metronomic or stiff. I believe the contrary. He teases perfection. It’s architectural, it’s a house, a castle of cards where everything is exactly where it needs to be. Though he’s mostly known for his Bach renditions, I strongly suggest you listen to his Intermezzi of Brahms, with far less pedal than most pianists who have played those pieces.

No wonder H.H. has appeared on so many recordings. Not only did he deliver killing inventive solos every time, he’s also one of the best accompanists ever. Always there, always supporting. I chose this album because it illustrates what I like best about Herbie Hancock’s musical mind: It’s orchestral. He also invented a very personal way to voice chords, it’s got an aerial thing about it. Imagine the different sections of an orchestra being played by one person at the piano. Picture the cellos here, the bass there, the strings, the oboe, perhaps a flute, the brass, etc. V.S.O.P. is one of the most orchestral quintets ever, with all these different spaces being explored, so hip! But wait, Herbie was (still is) an innovator in the way he did things technically at the piano, crazy stuff you’d hear in crazy pieces by Stravinsky and his peers. Herbie also mastered creating captivating rhythmic patterns, getting sounds never before heard out of the instrument. And let’s not forget about the funky Hancock, not just Head Hunters … I admire the musical versatility and diversity of his work.

Oh shoot, I’m leaving Chick Corea out! He most definitely owned he piano world as well (album: Now He Sings, Now He Sobs). Please check out the duo recordings he and Herbie did together.

Well, he also changed everything. I was saying how I admired the way Ahmad Jamal paid attention to the sound of his trio, and I would say the same about this mythic trio with Gary Peacock and Jack DeJohnette (I also love the earlier stuff before that trio). Mr. Jarrett brought us new and fresh approaches to the Great American Songbook. What I admire the most is his phrasing; the way notes follow each other has never been done that way. Whether he’s playing solo or trio, he creates spaces, to enter into a musical “high” where you are just absorbed, transported. It’s almost stupid to try to describe it, so I’ll stop. Just listen … a lot.

Probably most known for being The Man in John Coltrane’s quartet, Mr. Tyner has many sides. Hear how delicate and distingué he sounds on ballads (“When Sunny Gets Blue” from Today and Tomorrow). I chose this album because I’m amazed that I only discovered it recently—I was blown away! McCoy’s playing is at times vertiginous. Check out how free his left hand can be (“Little Brother”). Without getting too technical, the way he plays with those pentatonic (five-note) scales is just mind-blowing. If you’re trying to quit coffee, take a shot of this! (Actually, be careful, this would be a triple espresso.)

You know right away when it’s Monk at the piano, just like you know right away when he—or anyone else, for that matter—is playing one of his compositions. His approach to everything is singular: the way he strikes the keys, the voicing, the phrases, the rhythm, the use of space or silence. He owns it all. I love his solo albums.

In line with many resourceful jazz practitioners, Gilad Hekselman responded to the enforced isolation of the COVID-19 pandemic with a turning-lemons-to-lemonade attitude that ultimately eventuated … END_OF_DOCUMENT_TOKEN_TO_BE_REPLACED

It was the 1950s. Bebop had established itself as the new paradigm of jazz, but its newest popular variant, “cool jazz” or “West Coast jazz,” … END_OF_DOCUMENT_TOKEN_TO_BE_REPLACED

Session players have always been my thing. Not to take away from the singers or bandleaders or what have you, but I’m more interested in … END_OF_DOCUMENT_TOKEN_TO_BE_REPLACED

Walter Smith III has been burning the candle at both ends. As he connected with JazzTimes via Zoom from a New York City hotel room … END_OF_DOCUMENT_TOKEN_TO_BE_REPLACED