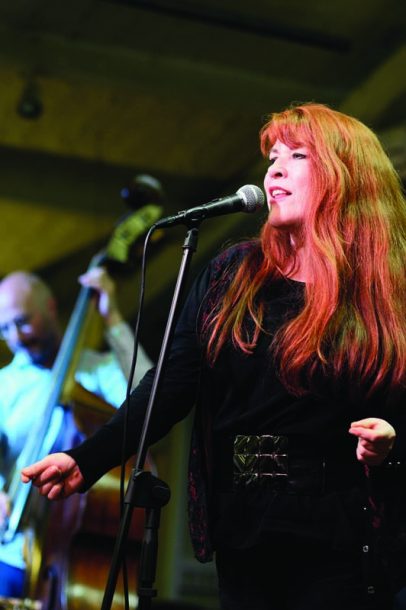 I’ve been fortunate to be able to tour a lot in the U.K., and I’ve gotten to meet many British musicians through my playing there. There’s a real essence to these players. My choices here include musicians who don’t just stick to one genre and who cross-pollinate their creativity. They can read, they can play, they’ve checked out African music and world music. They’re curious people. These selections also comment somewhat on the disheartening exit of Britain from the European Union, and on the skewed views of immigrants and community that led to that particular vote.

Paul can play anything-flute, saxophone, penny whistle and more. He can swing and he also plays beautiful pop solos. I’m especially drawn to the musicians on this record because of the homework they did in Africa. I love the Weather Report kind of thing they have going on here; the sound encompasses some Brazilian music too, with that Milton Nascimento vibe.

I really dig her; she’s so organic and this track is playful. She sounds very relaxed, but she’s got a real burn to her playing on the tenor saxophone. This track has a really nice live feeling to it, with weaving lines and constant listening, supporting and interacting from the bass and drums. She plays the entire time on it and my ears never get tired.

Trumpeter-composer Andre Canniere is American but he’s lived in England for a while now. He and I have kids about the same age, and he wrote this about the Sandy Hook tragedy.

It’s a painful and trying issue that we have to work out through our music, and I feel that he did a beautiful job, pouring his emotions into this piece and playing his heart out on it. There’s a certain insistence to this piece; it has a positive fight in it that we all need more than ever these days.

These youngsters are coming out of the Django Bates and Kenny Wheeler legacy, where they’re spirited composers and bright improvisers. Nobody is phoning in their part; they are living it. It’s a new branch of sound that they’re coming up with. The singer, Alice Zawadzki, has such a personal sound. This project features arranging and writing for formats ranging from string quartet to orchestra.

Phil is a British bassist and composer now living in Berlin. I play a lot with him, most recently touring and recording with German saxophonist Tobias Meinhart. He’s a fantastic musician-very methodical, highly musical and super conscientious. This is his solo record. He bares his soul the most on this track, a slightly mournful but sweetly celebratory waltzing ballad written for his late mom.

Christine Tobin
“Dance Me to the End of Love”
A Thousand Kisses Deep (Trail Belle, 2014)

Christine, now based in New York, brings magic to any tune instantly, thanks to her honesty and passion. Nick Smart is a great trumpeter and very deserving of wider recognition. Between her husband, guitarist Phil Robson, Nick and bassist Dave Whitford, Christine is provided with a unique foundation for a classic Leonard Cohen tune. The trio and Christine create a funky, lilting, lyrical journey for the ears and soul.

Saxophonist Julian Argüelles is on this. He came out of the scene associated with the British big band Loose Tubes. Over the years he has played an integral role in the bands of Hermeto Pascoal, Dave Holland, Django Bates, John Scofield, Kenny Wheeler, John Abercrombie and Bill Frisell. Not to be forgotten is this incredible album he made with the departed master John Taylor. With Martin France on drums and Palle Danielsson on double bass, there’s little room for anything less than brilliance. The track is very romantic yet a little sad at the same time. It has that Kenny Wheeler-esque sweetness to it, with lots of space yet no shortage of fascinating harmonic and melodic content. This is a desert-island record for me. JT

Ingrid Jensen is a New York-based trumpeter and composer originally from Nanaimo, B.C., who has recorded several albums as a leader and collaborated with such artists as Terri Lyne Carrington, Maria Schneider and Darcy James Argue. She will release her next album, Infinitude, a collaboration with her sister, saxophonist Christine Jensen, and guitarist Ben Monder, on the Whirlwind label this fall. Originally Published October 31, 2016

In 2020, to celebrate JazzTimes’ 50th anniversary, we made a bold (some would say foolhardy) call: the top 50 jazz albums of the past 50 … END_OF_DOCUMENT_TOKEN_TO_BE_REPLACED

In 2020, to celebrate JazzTimes’ 50th anniversary, we made a bold (some would say foolhardy) call: the top 50 jazz albums of the past 50 … END_OF_DOCUMENT_TOKEN_TO_BE_REPLACED

In 2020, to celebrate JazzTimes’ 50th anniversary, we made a bold (some would say foolhardy) call: the top 50 jazz albums of the past 50 … END_OF_DOCUMENT_TOKEN_TO_BE_REPLACED

In 2020, to celebrate JazzTimes’ 50th anniversary, we made a bold (some would say foolhardy) call: the top 50 jazz albums of the past 50 … END_OF_DOCUMENT_TOKEN_TO_BE_REPLACED