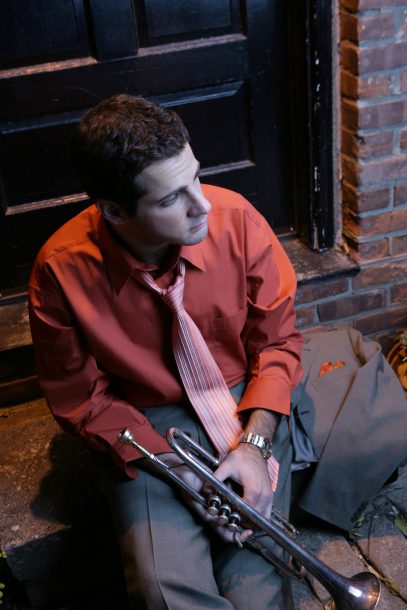 Clifford Brown’s sound is filled with love and soulfulness. It penetrates into the core of my heart. His performances, with their beautifully constructed melodies, are delivered with impeccable articulation and grace; they evoke all of the bittersweet emotions of what jazz is. While Clifford’s artistry can be broken down and analyzed for eternity, his music reaches me on a profound emotional level first, and immerses me in his world.

This is the first performance of his I learned-his sound, articulation and embellishments. I used to take a stereo with me to family parties and play along with Clifford and imagine that I was in the studio constructing this perfect solo. His articulation alone is filled with so much warmth and humanity.

I always enjoy hearing him try to figure out the melody at the beginning. It’s one of the few documented instances of its kind. As his solo evolves he works out a triplet concept while never losing his gorgeous sense of melody. He is able to search and stretch harmonically and rhythmically without ever sacrificing musicality-quite inspirational.

More than six minutes of Clifford masterfully developing his solo and pacing each section perfectly. At this tempo, all articulation and every nuance of his sound are easily heard. My favorite moment is at 15:24-when Clifford enters into his next perfect phrase and in the space we hear what seems to be a band member yelling, “Yeah!” Like so many of Clifford’s performances, this feels inevitable.

I love his solo breaks here. Each solo break leads perfectly into the next chorus, and my favorite breaks of his are the last two. His articulation and Max Roach’s ride cymbal are so completely locked together, as always.

It’s one chorus, and from the “C” section into his cadenza Clifford’s playing is beautifully heroic. His cadenza has evolved from an earlier version of this song (“Jam Session”), and we hear material he used in a cadenza from “Once in a While” and from his classic solo on “I’ll Remember April” while he pushes into new harmonic territory.

I love Clifford’s fluid runs through the range of his horn and his beautiful wide vibrato. As his ballad voice developed through the years, his note placement became much more straight, and when the band goes into a double-time feel here, his articulation and rhythm are right inside of Max Roach’s quarter note.

Another performance of Clifford’s that feels inevitable. His articulation resonates so soulfully through the cup mute, and I love his tight and intricate phrases, all of which perfectly answer one another. Once again, his beat is right inside the drummer’s beat, and the drummer here is Roy Haynes.

I used to listen to this on my headphones while mowing the lawn, and after I finished the job, I realized I missed wide patches of grass because I was instead imagining that I was the one playing this perfect solo. Every phrase is married perfectly to the one before and after it.

“Memories of You”
Clifford Brown With Strings (Emarcy, 1955)

My dad and I spent hours sitting in the family room listening to this song on his super high-tech sound system. We’d talk about all of the nuances of Clifford’s sound that makes his soul come right through the horn. The body and richness of Clifford’s sound filled the entire room with a golden, warm beauty.

This has a completely different dynamic than his classic studio version. Clifford and Max Roach engage in an explosive melodic battle throughout his solo. While the studio version is a series of perfectly constructed phrases, this live version is filled with wild exploration and unresolved melodies, which are hard to find in Clifford’s studio work. Originally Published October 6, 2011

In line with many resourceful jazz practitioners, Gilad Hekselman responded to the enforced isolation of the COVID-19 pandemic with a turning-lemons-to-lemonade attitude that ultimately eventuated … END_OF_DOCUMENT_TOKEN_TO_BE_REPLACED

It was the 1950s. Bebop had established itself as the new paradigm of jazz, but its newest popular variant, “cool jazz” or “West Coast jazz,” … END_OF_DOCUMENT_TOKEN_TO_BE_REPLACED

Session players have always been my thing. Not to take away from the singers or bandleaders or what have you, but I’m more interested in … END_OF_DOCUMENT_TOKEN_TO_BE_REPLACED

Walter Smith III has been burning the candle at both ends. As he connected with JazzTimes via Zoom from a New York City hotel room … END_OF_DOCUMENT_TOKEN_TO_BE_REPLACED