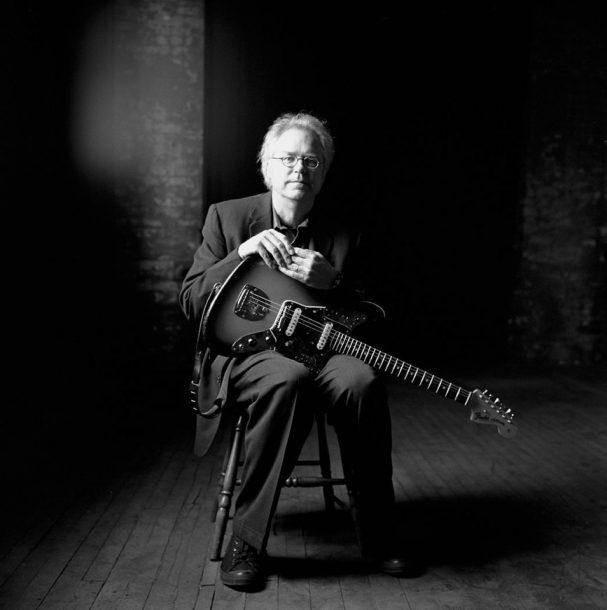 Upon first hearing Bill Frisell during the late ’80s, I was shocked, confounded and filled with joy-joy at hearing the guitar played with such a personal voice, such attention to sound and such wry humor. I have followed Bill’s career closely, seen him live countless times and been continuously inspired by the varied pathways he’s taken in expanding and refining his vision. I am also in awe of his gifts as a composer: In his work, unforgettable melodies, layered orchestrations and richly developed structures are integrated seamlessly with improvisation. I relished this opportunity to go back through his vast array of recordings and select some of my favorite tracks.

One of my favorite groups ever is the trio of Frisell, saxophonist Joe Lovano and drummer Paul Motian. It’s hard to pick just one recording of theirs, because every one is magnificent. And it’s funny that I should pick this one, because on this album they are joined by bassist Marc Johnson. His presence here allows Frisell a bit more latitude than he might have in the trio format. I love the way Frisell navigates this Bill Evans song, which is filled with chord changes, in a way that expresses its essence and also completely avoids the vocabulary that 99 percent of guitarists would use when confronted with its harmonic language and rhythmic feel.

The wonderful group that Frisell had with drummer Joey Baron and bassist Kermit Driscoll (and sometimes cellist Hank Roberts) has always been another of my favorites. During this era, the early ’90s, these guys were simply on fire and had an empathetic rapport that was very powerful. As a composition, “Rag” is campy, snarky and a little insane; as a performance, it unfolds like a good short animated film. Frisell’s clean and distorted tones and manic lines are genius. Egged on by Baron’s inspired drumming, he stretches out in a loose way that stands in contrast to some of the more poised and structured work he’d do later.

Here is Frisell, with George Lewis on trombone and John Zorn on alto saxophone, reinterpreting tunes from the hard-bop era. This Sonny Clark classic is taken apart by these three iconoclastic players, who set the various strands of its basic riff and melody free to dance and cavort. A great example of how to play standard repertoire without trying to ape original versions or simply play head-solos-head, this track is brought to life by the collectivity, intensity and sheer joy of the improvisations.

“Tales” is a narrative, layered and engaging composition, based on simple melodies stated by trumpet (Ron Miles), violin (Eyvind Kang) and trombone (Curtis Fowlkes) over a simple riff held down by Frisell; that riff that builds and builds to one of his most searing recorded solos. One of Frisell’s visionary masterpieces, inspired by his good friend Gary Larson’s visionary cartoon series.

This track features the atmospheric and free-floating guitar work that is unmistakably and classically Frisell-ian. But even more striking are the contour of his lines, his beautifully swinging time and his interplay with bassist Dave Holland during his solo here (and while comping for alto sax legend Lee Konitz). Wonderful and alive, with an unstoppable groove-sans drummer-that finally, and sadly, has to come to an end.

“Someday My Prince Will Come”

Beginning over an almost keening F pedal point played by Frisell, the exposition of a classic melody unfolds and leads to beautifully expressed individual improvisations by both the guitarist and pianist Fred Hersch. The way each supports the other is the very essence of what duet playing should be. So much tone in Bill Frisell’s hands! I love the motif that Frisell uses during the second half of the out chorus, and the high sonority that the performance ends on.

To recast an old saying: “four chords and the truth.” This song contains four chords and a pared-down melody and is deeply rooted in a strong groove via Jim Keltner’s drumming. A complete composition follows from there, using the simplest means. Compelling, inspired interwoven lines between Frisell and pedal-steel guitarist Greg Leisz (another hero of mine) carry the day here. If I listen to this song once, I usually listen to it at least once more.

Anthony Wilson is a guitarist and composer whose latest release is the CD/DVD set Seasons: Live at the Metropolitan Museum of Art (Goat Hill). Originally Published July 25, 2012

In line with many resourceful jazz practitioners, Gilad Hekselman responded to the enforced isolation of the COVID-19 pandemic with a turning-lemons-to-lemonade attitude that ultimately eventuated … END_OF_DOCUMENT_TOKEN_TO_BE_REPLACED

It was the 1950s. Bebop had established itself as the new paradigm of jazz, but its newest popular variant, “cool jazz” or “West Coast jazz,” … END_OF_DOCUMENT_TOKEN_TO_BE_REPLACED

Session players have always been my thing. Not to take away from the singers or bandleaders or what have you, but I’m more interested in … END_OF_DOCUMENT_TOKEN_TO_BE_REPLACED

Walter Smith III has been burning the candle at both ends. As he connected with JazzTimes via Zoom from a New York City hotel room … END_OF_DOCUMENT_TOKEN_TO_BE_REPLACED