Trios consisting of saxophone, bass, and drums were once a rarity, at best. But when jazz artists (Sonny Rollins, in particular) began experimenting with chordless ensembles in the 1950s, the sax trio became a daring extension of those experiments, and eventually a staple of small-group jazz. The lack of a piano or any other chordal instrument gives the band’s sound an openness, a devil-may-care freedom (even outside of free jazz) that suggests anything can happen at any moment. Indeed, in the 10 albums listed below, “anything” is often exactly what happens.

Although the sax trio is now a common configuration, it still makes up only a small subset of saxophone-led jazz records. Nevertheless, there are enough of them—and enough great ones—that this JazzTimes 10 will undoubtedly leave some out. (For one thing, it’s limited to one album per artist.) This list also places the albums in chronological order of recording, rather than a ranking. Think of it as a sampler platter. 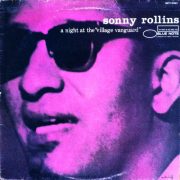 A Night at the Village Vanguard wasn’t the album with which Rollins broke ground on the sax trio format; that was Way Out West, from earlier in 1957. The Vanguard recording, however, confirmed the electricity of that format. Using two trios (Donald Bailey and Pete La Roca on the afternoon set, Wilbur Ware and Elvin Jones on the evening set), Rollins burns through “Four,” “Get Happy,” and two takes of “A Night in Tunisia.” The leanness of the sound makes the swing more direct and each player seems more aggressive; even Jones’ use of brushes on “Softly, as in a Morning Sunrise” can’t dilute his attack.

Preview, buy or download A Night at the Village Vanguard on Amazon!

In an interview with Wayne Enstice and Janis Stockhouse in Jazzwomen: Conversations with Twenty-One Musicians more than 20 years ago, pianist/composer Joanne Brackeen described herself … END_OF_DOCUMENT_TOKEN_TO_BE_REPLACED

In 2020, to celebrate JazzTimes’ 50th anniversary, we made a bold (some would say foolhardy) call: the top 50 jazz albums of the past 50 … END_OF_DOCUMENT_TOKEN_TO_BE_REPLACED

In 2020, to celebrate JazzTimes’ 50th anniversary, we made a bold (some would say foolhardy) call: the top 50 jazz albums of the past 50 … END_OF_DOCUMENT_TOKEN_TO_BE_REPLACED

In 2020, to celebrate JazzTimes’ 50th anniversary, we made a bold (some would say foolhardy) call: the top 50 jazz albums of the past 50 … END_OF_DOCUMENT_TOKEN_TO_BE_REPLACED