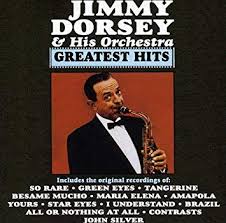 Helen O’Connell & Bob Eberly: “Tangerine”
Single release, Jimmy Dorsey & His Orchestra (Decca, 1942); appears on Greatest Hits (Curb, 1991)
Featured vocalists with the Jimmy Dorsey Orchestra, Helen O’Connell and Bob Eberly scored a string of major hits at the height of the big-band era, winningly contrasting his somber baritone with her swinging sass. “Green Eyes” was their biggest success but “Tangerine,” with its sharp-witted Johnny Mercer lyric, is their most clever. Eberly takes the first half, tenderly crooning about Tangerine, a fetchingly exotic Argentine beauty. Then, with Dorsey and his licorice stick igniting a breezy foxtrot, O’Connell handily cuts the femme fatale down to size, exposing her for the trumped-up poseur she is.

When I started listening to jazz, as a kid growing up in rural Ohio, I got pretty lucky choosing my first few records. A Dizzy … END_OF_DOCUMENT_TOKEN_TO_BE_REPLACED

You are reading the words of an Andrew Hill fanatic. The kind who has spent years poring over his music, track by track. And why … END_OF_DOCUMENT_TOKEN_TO_BE_REPLACED