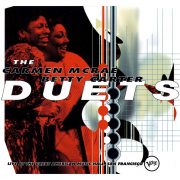 Carmen McRae & Betty Carter: “Stolen Moments”
From The Carmen McRae-Betty Carter Duets (American Music Hall, 1987; reissued with a different cover by Verve, 1996)
Mark Murphy added lyrics to Oliver Nelson’s “Stolen Moments” in 1978 and was incensed when Carmen McRae and Betty Carter subsequently traced an entirely different storyline for their summit at San Francisco’s Great American Music Hall. But the new lyrics, crafted by Gail Fisher, are perfect for these equally sassy giants as they ride the waves of Nelson’s tricky augmented scale to tell the tale of a romantic tryst. Both are at the top of their game, but McRae scores the winning point when she decrees, “I have heard when you have stolen moments it is called an affair —unfair!”

When I started listening to jazz, as a kid growing up in rural Ohio, I got pretty lucky choosing my first few records. A Dizzy … END_OF_DOCUMENT_TOKEN_TO_BE_REPLACED

You are reading the words of an Andrew Hill fanatic. The kind who has spent years poring over his music, track by track. And why … END_OF_DOCUMENT_TOKEN_TO_BE_REPLACED