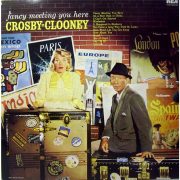 Bing Crosby & Rosemary Clooney: “How About You”
From Fancy Meeting You Here (RCA, 1958)
Crosby and Clooney’s joint musical travelogue, propelled by big, sparkling Billy May arrangements as they venture from Brazil to Calcutta, Monterey to Capri, is pure delight from start to finish. Close pals from the early 1950s ’til Crosby’s death in 1977, their playful affection shines brightest across a bouncy “How About You.” Adding to its sparkling effervescence are then-timely asides about everything from Bob Hope, Marlon Brando, and Kim Novak to the film version of Pal Joey and Crosby’s part-ownership of the Pittsburgh Pirates.

Preview, buy or download Fancy Meeting You Here on Amazon!

When I started listening to jazz, as a kid growing up in rural Ohio, I got pretty lucky choosing my first few records. A Dizzy … END_OF_DOCUMENT_TOKEN_TO_BE_REPLACED

You are reading the words of an Andrew Hill fanatic. The kind who has spent years poring over his music, track by track. And why … END_OF_DOCUMENT_TOKEN_TO_BE_REPLACED