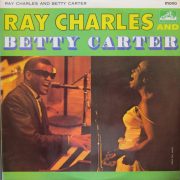 Ray Charles & Betty Carter: “Ev’ry Time We Say Goodbye”
From Ray Charles and Betty Carter (ABC, 1961)
In 1960, as Ray Charles was jumping from Atlantic to ABC and from R&B shouter to soul-laced pop stylist, he was encouraged by Miles Davis to take a young, richly promising vocalist under his wings. She was Betty Carter. They toured together and, in 1961, teamed for an album that not only set Carter on the road to stardom but ranks among the finest duet discs ever recorded. The opening track, Cole Porter’s bittersweet “Ev’ry Time We Say Goodbye,” is flawless, Carter’s gently sighed innocence serving as stunning counterpoint to Charles’ world-weary wistfulness.

When I started listening to jazz, as a kid growing up in rural Ohio, I got pretty lucky choosing my first few records. A Dizzy … END_OF_DOCUMENT_TOKEN_TO_BE_REPLACED

You are reading the words of an Andrew Hill fanatic. The kind who has spent years poring over his music, track by track. And why … END_OF_DOCUMENT_TOKEN_TO_BE_REPLACED