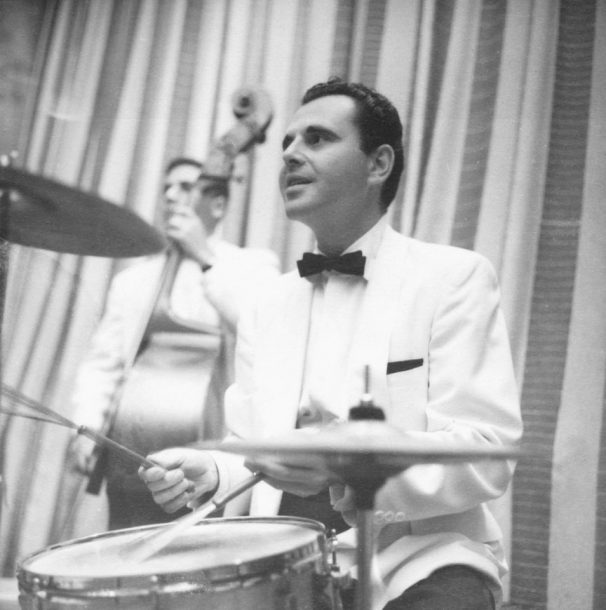 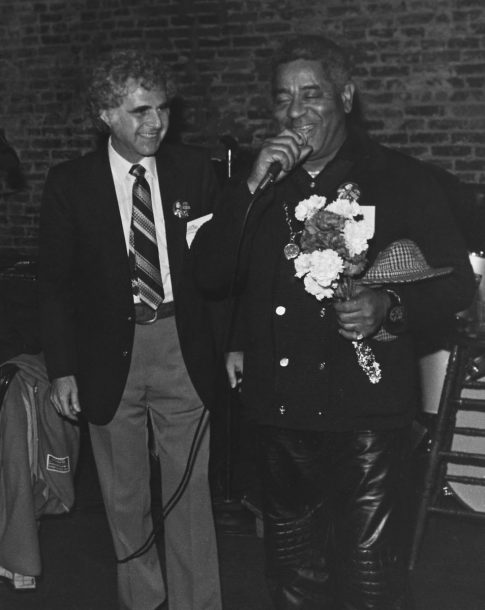 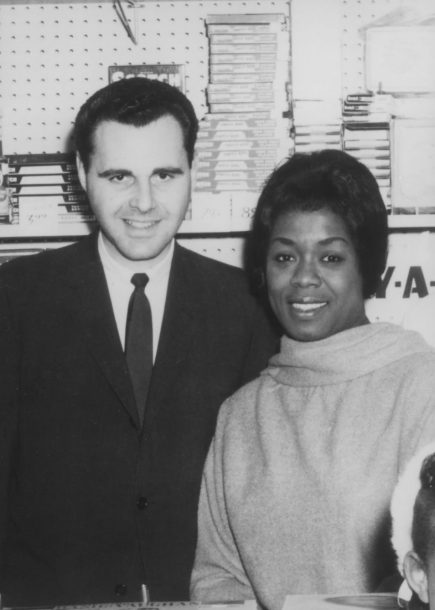 “I’ve been very fortunate,” says JazzTimes founder, former record-store owner and ex-jazz drummer Ira Sabin. “I’ve always done what I wanted to all my life. Running a store may have seemed a drag, but I made it a happening thing. The magazine is doing great; it started as a handout in the store, and now we’ve got a large staff—a bunch of good people. I’ve had a ball!”

Ira still talks like the bebop drummer he once was, and in the near quarter-century that I’ve known him I’ve yet to see a frown on his face. He is that true rara avis: a happy man. It all started when he was 12, not long after the Brooklyn-born boy had moved with his family to Washington, D.C. “The Veterans of Foreign Wars hosted an assembly at school, asking for volunteers for a drum-and-bugle corps. I raised my hand and they gave me a drum,” Ira recalls.

Not long thereafter he discovered jazz, and at 14 a neighbor, who was a music teacher, took him along on a trip to New York. “He had something to do and parked me in a club on 52nd Street—it was the Onyx, and who should be on the stand but Dizzy and Bird!” By this time, Ira was in a high school band that also included the great trombonist-to-be Rob Swope, but the first encounter with Gillespie was prophetic: the trumpeter became Sabin’s jazz hero, and a very special friend—as well as the first subscriber to Radio Free Jazz, the ancestral stage of JazzTimes.

By the time he was 16, Ira had joined the Musicians’ Union and begun to play professionally. That special personality must have ripened early, for before long he was leading his own groups. “I’ve been told that mine was the first integrated group in D.C.,” Ira says, “but I was just thinking about playing with good musicians.”

World War II was on, and good players were in short supply, so Ira quickly gained all sorts of professional experience. By 1952, two years after he’d married his childhood sweetheart, Irma, there was another war, euphemistically called “the Korean conflict,” and Ira was drafted. He wanted to be in a band, so he signed up for a four-year hitch.

“I got into a 60-piece band at Fort Meade and soon was leading a combo. Then I was sent to Japan. The band I was assigned to was led by a warrant officer who was a Dixieland cornetist and liked to get juiced; his brother-in-law was a commanding general, so no problems! I played snare in the concert band, had my own six-piece combo, worked an eight-to-ten-hour week, bought a car, rented a house, and Irma came over with our six-week-old daughter, Marla.

“When we were on the road, every little village had at least one coffee shop, with recorded music, and 95% would be jazz. A good dinner cost three bucks—now it’s about $100. I had a ball in Japan!”

Back home, Ira not only got right back into the local music scene, his group becoming a favorite with the “New Frontier” set, but he also branched out into producing events, ranging from complete entertainment packages for conventions to jazz concerts featuring top attractions like Count Basie, Duke Ellington and Miles Davis. Among other things, Ira booked the first integrated group of performers into the Capital City’s Constitution Hall—notorious for its refusal, in 1939, to let the great Marian Anderson perform there.

Ira recalls playing lots of society gigs, where the music had to be played nonstop “from about 9 p.m. until 10 or 11 a.m., when the last couple would drop on the dance floor. We’d play a chorus of melody, jam the next three and then go back to the melody. I’ve been in the union for 54 years—they gave me a pin. I earned it!”

Ira’s relative operated a couple of record stores and, while still playing and producing, Sabin went into a partnership with him. “After four or five months, I bought him out… I had my own ideas.” Ira’s first store was in the D.C. jazz district, within walking distance of six clubs and the famous Howard Theater. It became a hangout for musicians, but then came the 1968 riots. Ira’s was the only store in the area that wasn’t torched, but even so he decided to move—he also needed more space.

Sabin’s Discount Records grew into the country’s largest jazz outlet. This was before the advent of super chains, with New York’s Sam Goody’s the only such venture (and by no means were they jazz specialists). Ira soon came up with the idea of a publication advocating more airplay for jazz and listing his best-selling albums. Starting as a two-pager, it grew to four, then more, and after a variety of names was finally called Radio Free Jazz. “In the beginning, I wrote, took pictures, did graphics.” Then, to Ira’s surprise, one of his distributors wanted to take an ad, name writers volunteered their services and radio programmers from around the country started sending in playlists.

The time came to get serious and start charging for subscriptions. The first subscriber was Gillespie (Ira: “We must have been doing something right”), the second Kenny Drew. The magazines were mailed out from the store in what Ira calls “prehistoric” fashion, with names and addresses affixed with silk-screen stencils, with help from his then-young sons, Glenn (now CEO) and Jeff (now General Manager/Advertising Director). Soon, the masthead included such contributors as Stanley Dance, Leonard Feather, Ira Gitler, Doug Ramsey, Martin Williams and this writer.

A milestone for the magazine was the first JazzTimes Convention, in 1979. The scene was the Shoreham Hotel, the inspirational keynoter was Neshui Ertegun, Dizzy was the guest of honor (as he was at the second, and, if Ira had had his way, he says, “at all of them”) and loads of musicians jammed every night—for free.

“Dizzy, Frank Foster, Al Grey, Red Rodney, Ted Curson, Pepper Adams. Red said to call Ira Sullivan, whom I didn’t know. He asked me, in detail, for every day’s events. Then, after a moment’s silence, he said that on the last night’s jam, he’d be the first one there and the last one to leave—and that’s exactly what went down.”

I remember it well; the music lasted until four in the morning. Sullivan, in addition to fantastic playing, also ran the session like a musical wizard. In all, that first convention was a remarkable ingathering of the jazz world, and there would be many more.

One of Ira’s fondest memories is the historic cruise to Cuba in 1977. Again, his hero was very much involved. “President Carter had lifted the embargo for the occasion. On the ship some 30% of the passengers were media. Dizzy was the first off the ship, and there were a thousand Cubans yelling ‘Deezy, Deezy.’ Castro threw a party at a hotel—each place setting had a bottle of rum and coke. Irakere played, and Arturo Sandoval ran off some Dizzy licks so well that Dizzy dived under a table!”

On the way home, “Customs warned us: No cigars! But Diz walked off with two dozen boxes and nobody bothered him…. I loved that man. He had an old aunt who was in a [nursing] home in Maryland. We went to visit, and when he walked in, the whole place lit up. We went to a restaurant, and nobody recognized him at first, but then five or six little kids started pointing and yelling, ‘That’s Dizzy!’ They knew him from the Muppets—something else!”

At one of the early conventions, Ira was enchanted by what he calls his favorite rhythm section, consisting of John Hicks, Ray Drummond and Idris Muhammad. “I made the mistake of telling Idris that I play drums, and he jumped up and handed me his sticks and split. Ouch! I made sure he came back right quick… I could have sat in front of that trio all night!”

There are memories galore, but Ira’s far from resting on his laurels. He is still involved in facets of JazzTimes and he happily represents the magazine at various jazz events worldwide.

And he’s still deeply involved in his other passion: fishing. “It’s beautiful on the Potomac at 4:45 in the morning,” he says. “I’ve been fishing from the same spot for 55 years now—a place that’s been owned by the Fletcher family for 168 years. I knew the grandfather. What kinds of fish? Oh, there’s rockfish, striped bass, perch, shad, herring, walleyed pike, even catfish. It’s just 10 minutes from my house, and I’m in another world.” Originally Published September 1, 2000

“The Detroit Way,” according to author Bill Harris, who’s written extensively about jazz, is a tradition of schooling rising Detroit jazz musicians on the rudiments … END_OF_DOCUMENT_TOKEN_TO_BE_REPLACED

Tenor saxophonist Julieta Eugenio was recently reminded of the distinct pleasure one can derive from masters of her chosen instrument. While cooking at home and … END_OF_DOCUMENT_TOKEN_TO_BE_REPLACED

Everything about Israeli-born tenor and soprano saxophonist Eli Degibri is a celebration. You can hear that in his sideman gigs with Herbie Hancock and Al … END_OF_DOCUMENT_TOKEN_TO_BE_REPLACED

It’s a cold March Friday night in New York City, but the crowd inside the Village Vanguard crackles with warmth as it engages with the … END_OF_DOCUMENT_TOKEN_TO_BE_REPLACED