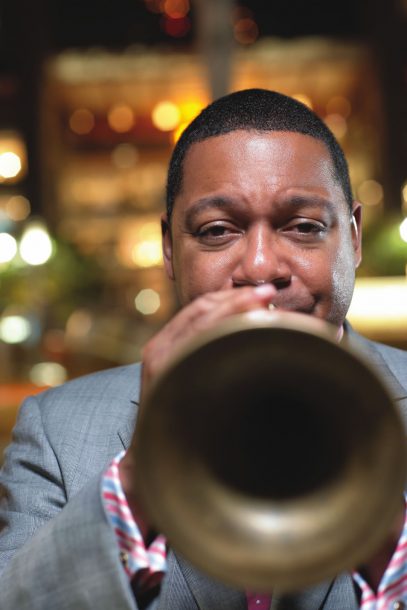 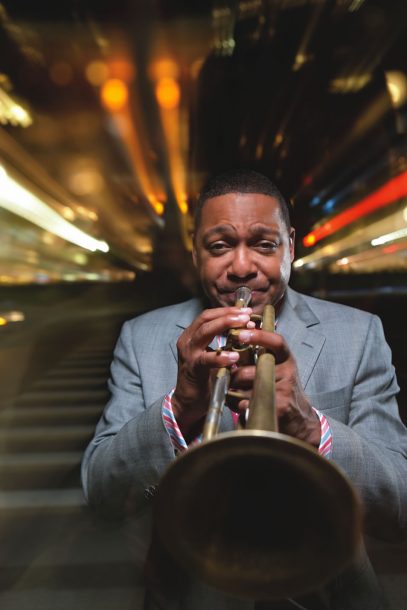 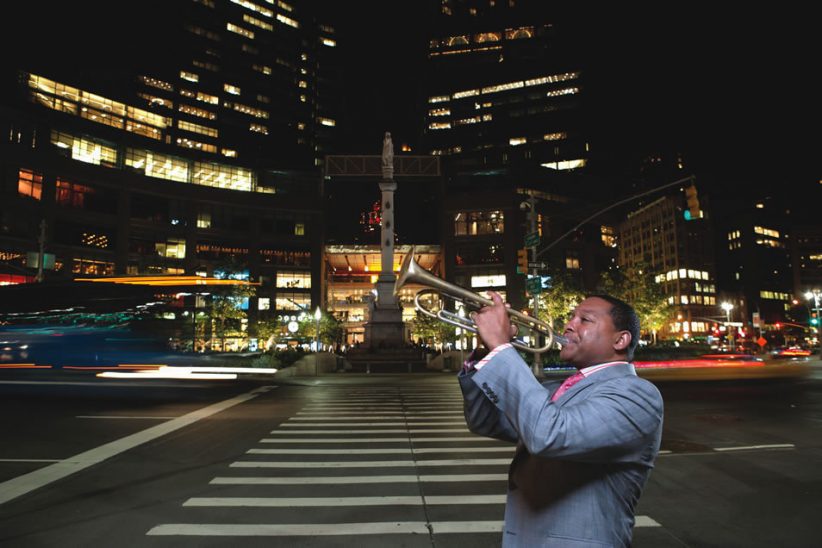 Wynton Marsalis is the public face of jazz. He is a cultural force, a symbol, a spokesman and-at times-a lightning rod for criticism. * He is a composer, bandleader and trumpet virtuoso with a ridiculously impressive resume-more than 30 jazz and classical recordings, nine Grammys and a Pulitzer Prize for his oratorio Blood on the Fields. As artistic director of Jazz at Lincoln Center he has the most high-profile jazz gig going. Marsalis has performed all over the world and worked with everyone from Art Blakey to the New York Philharmonic. * He is an educator, recipient of numerous honorary degrees, author of three books and a jazz alphabet primer for children. Kofi Annan appointed him a Messenger of Peace for the United Nations, he was designated a Cultural Ambassador by the State Department and remains prominently involved in efforts to bring his native New Orleans back to life following Hurricane Katrina.

It becomes hard to remember that at the root of all this Marsalis is just a trumpet player who has lived and worked in New York City since he came to attend Julliard at 17. Now 44, he released Live at the House of Tribes in 2005. It was a back-to-basics record, capturing the trumpeter with a small group in an intimate New York room complete with huzzahs and handclaps.

For JazzTimes’ New York issue, Marsalis spoke about the simple pleasures of “sitting in” in the Big Apple.

JT: What were your first impressions of New York?

I loved it man, when I came to New York. I would go hang out every night. I played with so many musicians. I remember all the old clubs: the Tin Palace, Jazzmania, 7th Avenue South, Mikell’s, the Knickerbocker. You remember the Red Rooster? That place was uptown. There were a lot of musicians of different generations and eras. The West End was still open, and a lot of different people were playing. Not a lot of young people. When I was 18 or 19, I was one of the only kind of younger people I ever saw out. A handful of musicians maybe, but it wasn’t that popular in 1980, ’81.

I’ve enjoyed my time in New York thoroughly. All the clubs down through the years. All the great musicians-Benny Carter playing with Lionel Hampton in Iridium. Stan Getz playing with Ron Carter at Fat Tuesdays. Playing with all kinds of younger people at 7th Avenue South. So many nights in the Vanguard.

JT: How has the scene changed since you’ve been here?

Bradley’s hurt us when that closed. That was a great place. I remember all the nights just hearing people playing there with Marcus Belgrave. Mulgrew Miller would be playing in there. Always the piano players-Kirk Lightsey would be in there, Ronnie Mathews. It was just a scene, a hangout.

JT: Most memorable experience sitting in in New York?

JT: I was in St. Nicks a couple of years ago, and you dropped in late with your horn. Do you still do that?

I love the sessions. I grew up in clubs, so I love to be in a club late at night, playing. That’s one of the greatest feelings I have and why I wanted to be a jazz musician. I grew up with my dad and I was always out-two, three in the morning. St. Nicks, yeah, I used to like to go there. Smoke is a great club. I think they have a great vibe in that club. I like that picture of Picasso on the wall. I really like what Danny Meyer and them did with the Jazz Standard. I like Danny Meyer, too. I just like what he contributes to New York City. I have tremendous, ultimate respect for him and what he’s trying to do. The orchestra of young kids on [Sunday]-I think that’s phenomenal, a great institution. That kind of civic-minded thing-using the music-that type of forward thinking that we need. ‘Cause it creates a feeling around people other than some type of meaningless dialogue. ‘Cause the music is all about the feeling that’s created when people get together.

JT: Is New York still the best place for young musicians to come?

I always tell young musicians [New York] is the best place to come if you want to change the way things are. We need some young musicians to come with a new attitude. Bring more love and more eagerness to make things be different. Make things be different….Come and bring some soul and some love and abide and get your groups together and play music and create warmth around the music. But be ready because it’s difficult to make it.

But the other point you have to make to young musicians today-if you were coming to New York to be a filmmaker it would be hard. The arts in general are hard. Painters are having a hard time. Writers. Whatever you come to the city to be involved in the arts, you have a hard way to go. But create a vibration around your music. Create a conversation about music.

I love jazz in the scene. I wish I was in New York more often, to get out. I don’t do that as much as I used to because sometimes I feel like I’m imposing on people. I don’t want to do that. But I love the feeling of lifting a club up and of that swing and of that festive, crackling sound. That’s fun, man. People start hollering, screaming. It’s fun, man.

As the lights dim, a dog wags its tail as it looks up at its master, a tall, clean-cut man whose silhouette fills the doorway … END_OF_DOCUMENT_TOKEN_TO_BE_REPLACED

Depending on how he looks at it, Kenny Garrett’s latest album, Sounds from the Ancestors, has been out for an eternity or an instant. Recorded … END_OF_DOCUMENT_TOKEN_TO_BE_REPLACED