Skip to content
Become a member and get exclusive access to articles, live sessions and more!
Start Your Free Trial
Home > Features > The Sunny Murray Interview 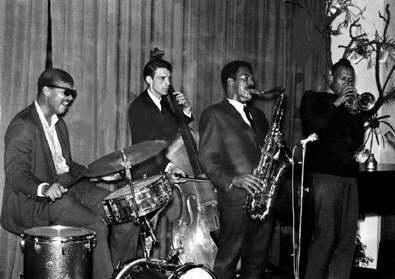 The mother lode for devotees of the jazz avant-garde and outré music in general, Jason Weiss’ Always in Trouble: An Oral History of ESP-Disk’, the Most Outrageous Record Label in America is a collection of incisive Q&As with the principals and players behind the game-changing company founded by Bernard Stollman in 1964. Sonny Simmons, Roswell Rudd, Burton Greene, Milford Graves, Sirone and many other label-associated greats are interviewed, in addition to ESP admirers, like Roscoe Mitchell and Ken Vandermark, and musicians who’ve recorded for the label in recent years, such as Joe Morris.

But the most and best material comes from Stollman himself (who takes a beating throughout the other conversations, from artists still waiting for royalties). With impressively detailed recall, Stollman discusses sessions, artists, deals and conspiracies, and reveals tales that have nothing to do with free jazz but are fascinating nonetheless. Like the music he purveyed, Stollman’s stories are full of strangeness as well as lyricism. Following this issue’s drum theme, we present Weiss’ July 2009 interview with Sunny Murray. -EVAN HAGA

A pioneer of free-jazz drumming, Sunny Murray first became known from Cecil Taylor’s seminal groups of the early 1960s, which led directly to his tenure as Albert Ayler’s drummer throughout 1964-65, appearing on all of Ayler’s original ESP-Disk’ recordings. At the end of ’65, he made his first record as a leader, Sonny’s Time Now (for the fledgling Jihad label founded by LeRoi Jones, now Amiri Baraka), with Ayler and Don Cherry in the group playing Murray’s compositions. He then led a date for ESP on July 23, 1967, Sunny Murray, where his quintet included bassist Alan Silva, trumpeter Jacques Coursil and alto saxophonists Byard Lancaster and Jack Graham. He often led his own groups after that, and in 1968 went to Paris for a few years. There he recorded various albums under his own name, for BYG and other labels, and played on dates by Archie Shepp, Dave Burrell and François Tusques; he also played the Pan-African festival in Algiers and the festival in Amougies.

In recent years, he has again been living in Paris, and in 2008 was the subject of a spirited documentary with a familiar title, Sunny’s Time Now, made in Europe by Antoine Prum. Among the contemporary sequences were concert footage of his British trio with saxophonist Tony Bevan and bassist John Edwards and rehearsals of a 17-piece band assembled for the occasion, with an impressive array of players doing mostly his music. The next year, he visited the States again where he was featured at the Vision Festival in New York.

How did you get started in music? When did you leave Philadelphia?

Before I got busted [as a teenager, he did some time in prison], I got into rhythm and blues, going to concerts, dancing with the music. It was the only outlet I had. I even had a partner one time-like the Nicholas Brothers-I’d make the routine. Then after I got stabbed in a gang war when I was 18-a very bad wound [left side below the ribs], I was supposed to die but I didn’t-and after I lost my fingers [three middle fingers, sliced off midway, on his right hand] at a steel factory, all in two months, I said, “Bye, Philly.” I did sheeting at a steel factory. It seemed like a bad omen, time to get out of town. So I came to New York in 1956. I came there to play. I could have boxed; I had an offer to train. I stayed sort of in the streets of New York, the Bowery, 35-cent hotels, worked at the agencies that the bums worked out of for about a year. But I bought books, and every night I would keep studying; nobody would mind.

But you didn’t have a set of drums yet.

No, I’d go to jam sessions. And then, at 19, a buddy across the street at an after-hours joint said, “Murray, you’re a drummer, right? Come over here. I got this set of drums. They got left when the police raided everybody.” I went and picked up my first drum set. I pushed it all the way down Third Avenue. I had found a little teeny room, and the first thing I did was I set them up and put on a Max Roach record loud as I could, and practiced. New York don’t care if you practice!

And within a few years you were playing with Cecil Taylor and everybody?

Yeah, it’s amazing. In four years I was with Cecil, in five and a half or six I was playing with John [Coltrane], with [Sonny] Rollins in between. It blows my mind, too, because I used to go to the first Five Spot, at Fifth and Third, and the owner-Joe Termini, a nice man-he thought I was a clothes shark. He had a big stomach, and he’d always walk me out the door with his stomach. He’d be smiling, and I’d go stand back outside. Then finally one day, it was raining a bit. I came in, and he said, “I’m sorry.” I said, “That’s OK, I’m playing tonight.” [laughs] “Playing tonight?” “Yeah! With Cecil!” “Oh,” and he moved out of the way.

Depending on how he looks at it, Kenny Garrett’s latest album, Sounds from the Ancestors, has been out for an eternity or an instant. Recorded … END_OF_DOCUMENT_TOKEN_TO_BE_REPLACED

As I delved ever deeper into the 14 albums that document the Larry Goldings/Peter Bernstein/Bill Stewart trio to prepare for our January Zoom conversation, what … END_OF_DOCUMENT_TOKEN_TO_BE_REPLACED

The musical avant-garde is an area where creative people who have earned wisdom through a lifetime of experience can flourish. Wadada Leo Smith, who last … END_OF_DOCUMENT_TOKEN_TO_BE_REPLACED

Wisconsin-born and proud: For all of the avant-everything complexity Ethan Iverson has applied to his solo projects or the sounds he created in his role … END_OF_DOCUMENT_TOKEN_TO_BE_REPLACED