Skip to content
Become a member and get exclusive access to articles, live sessions and more!
Start Your Free Trial
Home > Features > The Bad Plus “On Sacred Ground” 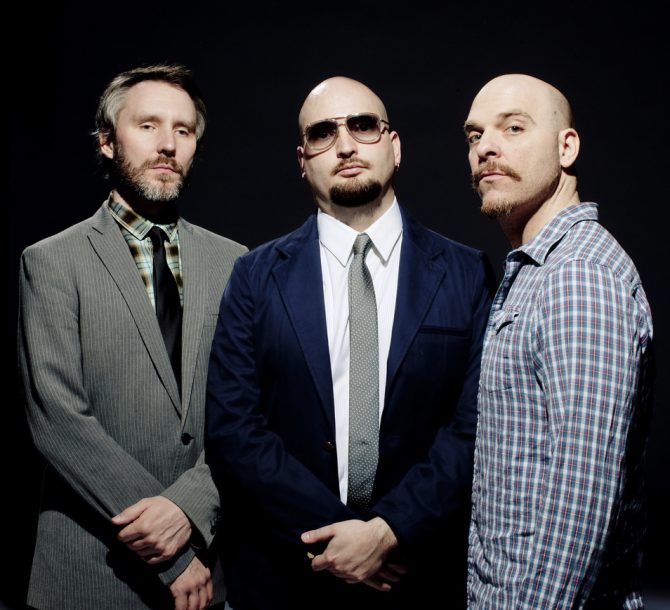 The Bad Plus are set to take on a monster of modern classical music. On Saturday March 26 at 8PM, pianist Ethan Iverson, bassist Reid Anderson and drummer Dave King will premiere “On Sacred Ground: Stravinsky’s Rite of Spring,” at Duke University’s Reynolds Theater, with an accompanying multi-media presentation by architect Cristina Guadalupe and filmmaker Noah Hutton.

The jazz trio’s take on this piece, famous for the rhythmic irregularities and dissonance that spurred a riot at its 1913 Paris debut, has been over a year in the making. It was co-commissioned by New York’s Lincoln Center for the Performing Arts and by Duke University, where the band has committed to three, week-long residencies during which they will read, critique and even record and perform the work of graduate student composers.

In describing their approach to the arrangement, Duke Performances Director Aaron Greenwald refers repeatedly to the “impressive earnestness” of the trio, known for their instrumental takes on pop tunes as well as a few previous forays into contemporary classical music.

“Although they are frequently pigeonholed as being ironic in one way or another,” Greenwald says, their primary pursuit as an ensemble is a kind of earnest expression. There’s not a whole lot of winking going on.”

Pianist Ethan Iverson, Greenwald says, “has probably read all he possibly could about Stravinsky in the time that he’s been working on this commission and he’s probably played through every score that he’s been able to get his hands on.”

From his conversations with the band about their process, he reports that “there’s a sense that a lot of projects based on “The Rite” peter out at the end because people run out of time or run out of energy,” and that therefore the band has been working on their arrangement “backwards,” attacking its final movement first.

Ethan Iverson put Stravinsky aside to answer some questions via email.

I just spoke to Aaron Greenwald and he suggested that the idea to work on “The Rite of Spring” originated from the band. How did the idea arise? What initially excited you about taking on this piece?

Of all the modernist classical music, The Rite is the “hit.” With most of our covers, we don’t go for the deep tracks, but the obvious choices. And the more we play the Rite, the more seminal it seems. It’s also almost exactly 100 years old. We are all Stravinsky fans from way back. But I think all of us actually knew other pieces of his better than “The Rite.” It’s funny, one time I saw Gergiev conducting “The Rite” and “Oedipus Rex” back-to-back at the Met, and I left feeling like “Rex” was much the greater work, (in fact, the first piano phrase on TBP album Give is quasi-lifted from “Oedipus Rex.”), but it’s been thrilling to learn all the detail in “The Rite” and how profound it really is.

In approaching your arrangement, how much did you dig into the piece’s history and its other arrangements? Was this history daunting? What was important to preserve as you stripped the piece down?

The thing we keep coming back to is simply this: how did they play the goddamn thing back in 1913? The rhythms are incredibly hard, even now. We play a lot of odd-meters in TB, but it is safe to say our ass is kicked. While the orchestral version is the most important, Stravinsky made a piano duet version that is the text for our arrangement. There are some excellent solo piano renditions-the best just came out last year, in a stunning version by super-virtuoso Serhiy Salov. It’s like Stravinsky re-imagined by Scriabin.

As far as jazz and rock goes, I have heard versions by Herbie Mann (hopelessly truncated), Larry Coryell (at least he plays all the movements) and The Butchershop Quartet. The Butchershop is the best of the three. But I think there’s room for TBP, (I’m sure there are other cover versions I don’t know).

It’s important to preserve as much as you can. But also we can’t worry about playing everything in the orchestral score. Not even Serhiy Salov or the two-piano versions can realize every detail. The point is, of course, to bring an interesting feel to this incredibly rhythmic music. I’ve played in a lot of bars, for example. Has Serhiy Salov played in a lot of bars? I think not.

In a previous JazzTimes interview you mentioned that you would be exploring “the prog rock and Duke Ellington aspects” of the piece. What did you find?

Yes, both in copious qualities. You try to have a folk base in music. That is always best, and you can find it in “The Rite.” Then the intellectual coloration comes from loves like Yes and Ellington. But it is so important not to gild the lily. We could never add electric keyboard or the blues in an attempt to show we know those things, too. Just three acoustic instruments, playing the score almost completely straight, and adding whatever non-Stravinsky juice that feels completely natural (the first movement may have a little bit of an electronic element-not sure yet).

It’s an epic project. What kind of reactions have you gotten from people who know this piece and it’s history when they learned you were working on a jazz version for three instruments?

People always ask, “Are you playing the whole thing?” Of course we are playing the whole thing! I’m not really sure this is a jazz version either. Lots of stuff in TBP walks the line: “Is this jazz?” Well, the TBP/Rite is on a whole other avenue. Hey, if you want to call it jazz, great. We certainly love jazz! But for me, the phrase “a jazz version of ‘The Rite'” sits there wilting on the vine…I’m already yawning. We are trusting that TBP fans understand that we bring TBP to the room in whatever we do. Imagine if I played jazz chords in our cover of Aphex Twin’s “Film” wouldn’t that be awful?

What will the multimedia aspect of the performance look like and how did it come together?

Architect Cristina Guadalupe and filmmaker Noah Hutton have worked successfully on previous TBP-connected video projects. We have turned them loose and can’t wait to see the result. We do know that dancer Julie Worden will appear onscreen. She’s an old friend who choreographed our Milton Babbit video. It’s nice that Julie agreed to being sacrificed for “On Sacred Ground: The Bad Plus plays Stravinsky’s Rite of Spring.”

Depending on how he looks at it, Kenny Garrett’s latest album, Sounds from the Ancestors, has been out for an eternity or an instant. Recorded … END_OF_DOCUMENT_TOKEN_TO_BE_REPLACED

As I delved ever deeper into the 14 albums that document the Larry Goldings/Peter Bernstein/Bill Stewart trio to prepare for our January Zoom conversation, what … END_OF_DOCUMENT_TOKEN_TO_BE_REPLACED

The musical avant-garde is an area where creative people who have earned wisdom through a lifetime of experience can flourish. Wadada Leo Smith, who last … END_OF_DOCUMENT_TOKEN_TO_BE_REPLACED