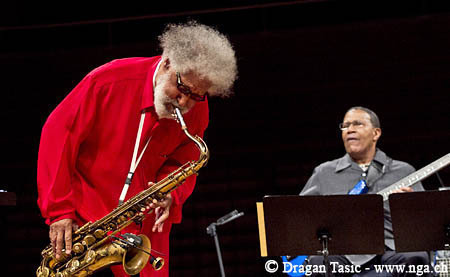 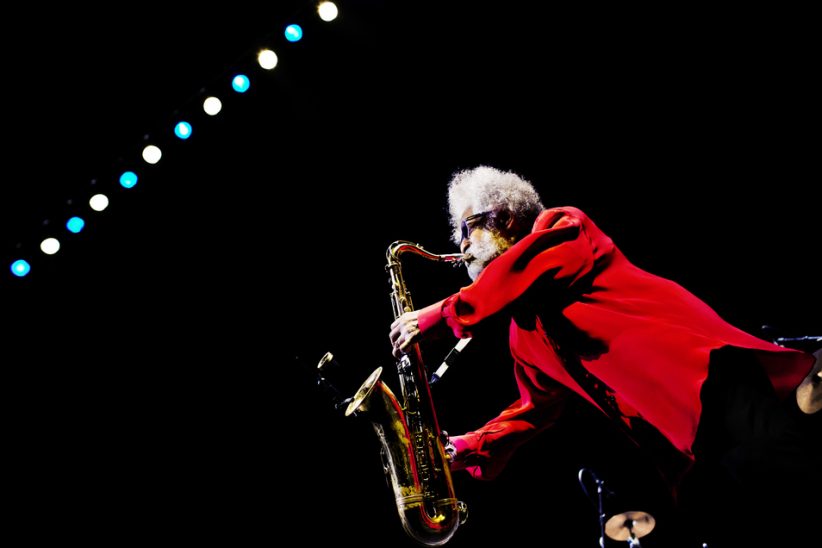 During the 35th anniversary session of the Umbria Jazz Festival in the 13th Century city of Perugia in Italy, I was privileged interview an artist to whom I’ve been listening all my life. As you regard the landscape of jazz, you can’t miss the imposing figure of Sonny Rollins; he rises tall. The summit of this musical mountain may be a little snowcapped right now, but he is still the number one saxophone colossus.

Sonny Rollins: I love the audiences in Perugia. And I love the audiences in Italy because Italy has a long tradition of music and they have a deep appreciation of music. And, Americans have another sensibility; [it’s] not unequal, just different. I appreciate both. But I do love coming here to Perugia. It’s a beautiful place and it’s a lot of fun. Of course, it’s hard because we’re always trying to play and that’s our challenge, but it’s [got] beautiful surroundings so [it] makes things pleasant.

You’ve played with the legends of jazz. If there was a hall of fame for jazz players, everyone would be in it including you, of course. I’d like you to take a moment, if you would, just to comment. Because you have a unique perspective into all these people with some names I’m going to rattle off for you. Let’s start with Miles Davis.

Well, Miles was actually, contrary to his reputation, a very shy person. I think he sort of manufactured his persona because it was newsworthy and everything. But he was a very shy person. Miles used to turn his back when he was playing, not because he was being dismissive of the audience but because he was shy about what he was playing. Few people know that but I’m just saying that he was a sensitive, an extremely sensitive person. You know, he’s a beautiful, soulful player. I had the privilege of playing with him and knowing him. He was a unique person.

Coltrane was-how can I say this-sort of like a country boy in a sense. He was a very unassuming genius musician, and very humble, very kind, sort of almost like a reverend, you know. This is how I felt when was around Coltrane. He was very serious, very sincere about life, a very deep thinking person, and a beautiful person. Although we had our rivalries and all this things and the public press and all this stuff, we were really very close friends. I consider Coltrane and Monk my best friends during one period of my life. So Coltrane is wonderful. I’m glad he’s made the impact that he has on his music, because he’s so real.

You had a special relationship with Thelonious Monk.

I had a special relationship with Monk because I started playing with Monk when I was in school. And Monk sort of took me under his wing, so to speak. That was really great; [I] learned a lot playing with Monk. Monk said something one time, which really turned on the light bulb in my head. Monk said, “You know Sonny, without music, the world wouldn’t be worth living in.” It seems like a fairly simple statement, but when he said it – it [was like], “Wow, that’s it. That’s exactly how I feel.” Monk and I had a lot of things in common. They call Monk the high priest, and for a reason. Monk had a certain kingly quality about him. I’m speaking about the important things. I’m not speaking about things, [like] how much he can drink at a bar. That’s foolishness. I’m just talking about the real person. Monk was like a high priest and he’s one of the most important people in my life.

Your sabbaticals are legendary. I used to stand under the Williamsburg Bridge in New York and you would stand up on the bridge in 1959 with your soaring rifts. Nat Hentoff said, “It was like releasing musical notes like wounded ravens in the New York night sky.” Tell me about that.

I’ve taken several sabbaticals. You know, my sabbaticals are indicative of the something more than the particular reasons why I took them. It was something in me that spoke to me, inner conscience, “Well, Sonny, you need to get away from music. You need to go to India, if you want to go there and study spiritual things. You need to practice more if you feel you’re not being as productive as you can be, as your talent would allow you to be.” So I took several sabbaticals in my career, but they were all motivated by a desire to perfect myself. That’s the only thing. It was difficult at time because many people tell me, “Oh no, don’t go away from music. How can you leave music? They’ll forget about you in a year. You know, there’ll be somebody,” and things of that sort. But, you know, I was sort of answering to a different call. It’s wonderful. I’ve had several experiences in my life like that, where I had to summon up enough spiritual strength. We all have it. I was just fortunate, and I did that work myself. It wasn’t just about being lucky. I worked hard at realizing my inner strength. I’m most proud that of my whole life I was able to answer my own inner strength and do things that I needed to do, that I should do and had to do. It was a matter of being strong and being true to myself.

You’ve always operated at the cutting edge of jazz. In fact, you pioneered the use of bass and drums without pianos. You call it strolling. You can also improvise anything from “Sweet Leilani” to “Happy Birthday”, which you did last night at the concert. It just popped out. Sonny, when you improvising like that, what happens? Do you see the music? Do the thoughts come in? How does that occur?

The improvising process is very hard to explain. Because when you improvise and when you find that you had a successful story, a successful concert, whatever, you try to repeat it. However trying to repeat jazz, I realize, that it was impossible. I might try to, like you said, play some kind of a riff, “Happy Birthday”, whatever it was. So if I said, “Oh gee, I’m going to play tonight. I’m going to repeat that now. Everybody will say, ‘wow, isn’t that great.'” I’ve tried that. It doesn’t work, because the music is coming too fast. The music is coming so fast that if you think about it, it’s too late. So you can’t think and play at the same time. Therefore the improvisation process is something which happens by itself. I’m just there. I do my preparation. I learn the songs and everything like that. But I’m just standing up there at that point. I can’t think about it – it’s not possible. I would say it’s sort of a – I’m sure there’s a way people call it. Talk about zen and all these things, and how you don’t aim the arrow, you just shoot, you know. But whatever it is, it’s a process which I’m not in charge of.

Yeah. It’s a hell of a channel. Final question Sonny, 9/11 happened in your backyard. What was your musical reaction to that tragedy?

9/11 was, of course, just unbelievable. I learned so many things from 9/11. As you know, I lived six blocks from the World Trade Center. [In the] first place, to be there and see the panic in the streets, people running, women crying, nobody knowing what to do, and the fall out; that was one thing. Having to be evacuated and all of this stuff. It showed me the complete ignorance of human beings because I realized at that time what it was like to be bombed, and how one person could bomb somebody else. This kind of stupid hatred is hard to comprehend. I’ve come to realize in my life that this is the way the world is. Our creator, whoever you believe in — the world was created this way, with ignorance and insight. So there’s no way of really changing that; we just have to accept the fact that this is the world we live in, and there’s going to be ignorant people and things like that.

But to be in 9/11, even today, if I hear an explosion, I instinctively look up, you know. And I know that experience has happened to other people who’ve suffered during war. I was talking to a lady the other day and she was in the Second World War, and she said every time she hears something, she looks up and she’s afraid for a minute. I learned a lot of things 9/11. I had an apartment down in the city and we had lived there for almost 30 years or so. I had so many things there, so many books, so many records, so many instruments, [and] clothes. Because we lived up in the country but I would leave to go on the road from New York City. So I had all my stage clothes and everything, my piano, everything. The piano that Monk and a lot of guys play on. Everything was in that apartment. I had to give it all up because of the contamination. But what I learned from that was that things are not important. It was hard giving it up. But then the realization came to me that, “Okay, this is my favorite piece of music from 30 years ago, but so what?” It’s a deeper lesson. I mean things are not important. People are important. Thoughts are important. Ideas are important. And we have to give up the pieces of paper, pieces of clothes, instruments [and] anything. That brought that to my consciousness in a way that nothing else would have.

Well, Sonny. I can say, “Thank God for Sonny Rollins.” And thank you for the music.

Thank you very much, I appreciate it.

Depending on how he looks at it, Kenny Garrett’s latest album, Sounds from the Ancestors, has been out for an eternity or an instant. Recorded … END_OF_DOCUMENT_TOKEN_TO_BE_REPLACED

As I delved ever deeper into the 14 albums that document the Larry Goldings/Peter Bernstein/Bill Stewart trio to prepare for our January Zoom conversation, what … END_OF_DOCUMENT_TOKEN_TO_BE_REPLACED

The musical avant-garde is an area where creative people who have earned wisdom through a lifetime of experience can flourish. Wadada Leo Smith, who last … END_OF_DOCUMENT_TOKEN_TO_BE_REPLACED