DDB: Okay, let’s bring Veronica in here. Veronica, who was your influence?

VS: My daddy [pianist Hod O’Brien], first and foremost. I listened to all the great records growing up because of him. I really wasn’t seeking out the music because it was just always there. As a little, little, little kid, I was like, “Oh, that’s just my dad.” You know? Sheila and my dad used to play together, she sang one of his songs, and I grew up listening to her too because of that. My dad introduced me to all this music, and so did my mom—one of the great singers, Stephanie Nakasian. On the road with them, I got to meet a lot of the great legends; Bob Dorough was Uncle Bob and Jon Hendricks and Annie [Ross] were always like family too. I never thought much about it, but later on I was to see how it did indirectly influence my music. [My parents and I] would do a lot of vocalese together, like Lambert, Hendricks & Ross would do. I really took a liking to Lambert, Hendricks & Ross because there was the bebop and there were words. I think the first jazz tune I ever learned was “Twisted,” actually. When I was maybe 11, I went to go hear Annie Ross at the Metropolitan Room, and I think a friend must have said something, and she asked me to come up and sing “Twisted” in her set. That was one of the craziest moments of my life. I said to the band, “Do you guys know ‘Twisted’?” Of course they knew “Twisted,” it’s Annie Ross’ band! I mean, c’mon. I didn’t know anything.

But really what grabbed my attention before bebop was King Oliver and Louis Armstrong, and this music was what made me want to sing jazz. There was something about it. Bebop I began to appreciate later, but it was music of the ’20s and the great legends of that time—that’s really what got me into this music first and foremost.

VJ: You come from Gen Z. What drew you to this older music?

VS: The fact that it was so timeless, is so timeless, and that when I was performing at a young age I was noticing that singing these songs was bringing people together from multiple generations and multiple parts of the world. It didn’t matter where we were—we felt connected to everyone and anyone who was there to listen. My parents weren’t superstars or anything, so they played some hole-in-the-wall places and … I’m from Charlottesville, Virginia and it’s country down there, and we’d have a lot of people come up to my parents and say, “I don’t like jazz, but I like what you do.” You know that?

VJ: You mentioned that you started out on the trumpet. How did you transition to becoming a vocalist?

VS: Well, I was always singing. I was playing trumpet since, like, third grade, and I have so much to thank my trumpet teachers for because that’s where a lot of my ear training was coming from—that and singing in choirs. I still play, actually. The big frustration was that I couldn’t play what I wanted, what I was able to sing solo-wise. I was like, “Well, I’m scatting all this stuff but I can’t figure out how to blow.” There was a disconnect from here to here, but I was able to just sing it. And also I loved singing lyrics. But I think I’ll bring back the trumpet a little bit more.

DDB: I was going to say that. I think you should. Go do some woodshedding and bring it back. If you’ve got more than one talent, please give us all of those talents. Don’t push one back just to push another one forward. Bring them all to the table. Especially for us women, it’s really, really important. I think you do yourself a disservice if you are not utilizing all of your talents, and those are gifts—even if you had to train for it, it’s still a gift, you have that capacity. So, yeah, go shed and bring that back, baby. If you pick up the trumpet and play a solo, people will go crazy! And then you put it back down and sing? Isn’t that true? [Applause] Or even if you start during the introduction—just use it! Even while you’re getting your chops back together, use it.

VJ: Maybe on your next album you can feature yourself on trumpet and vocals.

DDB: Yes! Look at us, we’re putting it together for her. [Laughs] No, seriously, I think it’s really important. Sheila was saying that she had no formal training. I had no formal training, and my father—I mean, this was another generation—when I expressed to my father that I wanted to play the piano at 12, he said, “Girls don’t play piano. Girls sing.” And when I say this, people go, “Oh!” [gasp], but no. He was born in the ’20s and that’s where it stayed in his mind. So I just never did [take piano lessons].

But when I came along, there were still a lot of musicians who were self-taught, and it was no big thing to be self-taught. Now all of these young kids are technically savvy because they’ve gone to school, but somewhere in this training, I feel a lot of times, the soul is lost. And the kids are caught up putting out all of these notes and the melodies are complicated and Lord, have mercy. You know? I’m on the faculty of the Jazz Ahead program at the Kennedy Center and I say to these kids when they start working on their compositions, because it’s a composition camp—I say, “Baby, we can’t even hum it! You’ve got to get out of your heads! And you have got to eliminate some of those notes, simplify it so that we as the listening audience are going to be able to take something away. I can’t sing that! Nobody can sing that.” But this is what I feel is going on—now that jazz has become a curriculum across the country, around the world, it’s being taught from a technical standpoint only. A very sad thing.

SJ: One time I was doing a concert somewhere and a girl came up to me and said, “I’m a jazz singer too!” And I was thrilled—she was young—and I said, “Oh, that’s great. Then you must know Bird?” And she said, “What kind of bird?” I said, “Well, if you’re going to get into jazz, then you better find out what kind of bird I’m talking about.” [Laughter]

DDB: But those are true stories. And so many young musicians do not know the standards.

DDB: They learn their stuff. That’s all they know. You ask them to play Duke Ellington’s “It Don’t Mean a Thing”—something that simple—and they’re like, “What? Who?” I’m like, “C’mon now!” So something is getting lost in the jazz curriculums, and I’m a little concerned about it.

VS: I’m lucky that I had both sides of this. I grew up with musician parents who were in that world, and then I also did go to college and I went through the curriculum. I was lucky to have teachers that also were on the road and had that understanding. So I found solace with them and that kept me going, I was getting frustrated for a bit there in my education but I made it through. But yeah, it’s the same thing—I’m not much older than these college kids, but I do go around and share my experience and I think that helps. And I ask, “How many of you guys know 10 ten standards?” Most, 80 percent raise their hands. “How about 25 standards?” And then hands are going down. I was just so surprised. But, you know, you’ve got to start there, teaching these songs. Learn these songs. Listen. “How many of you listen to John Coltrane?” Everyone raises their hands. “How many of you listen to Coleman Hawkins?” Guess who was listening to Coleman Hawkins? John Coltrane. Do your homework. Go to the source.

JON IRABAGON  The title track … that groove. Even in college I remember putting it on at parties and that it just mesmerized a ton … END_OF_DOCUMENT_TOKEN_TO_BE_REPLACED 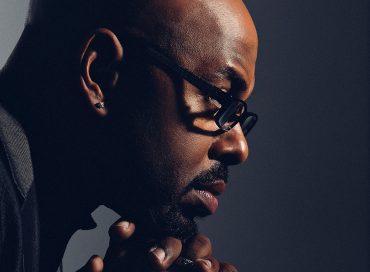 Let’s talk about your project The Movement Revisited. I saw a live performance of it at the University of Maryland back in 2013. The recording … END_OF_DOCUMENT_TOKEN_TO_BE_REPLACED

Like another Philadelphia-bred bassist—Christian McBride—Gerald Veasley wears a lot of hats. He started playing professionally in the late ’70s with the fusion band Reverie, and … END_OF_DOCUMENT_TOKEN_TO_BE_REPLACED Chilliwack (pop. 100,000) is a rural Canadian town, about a 90-minute drive east from Vancouver, in British Columbia’s agricultural heartland. It’s known for its mild … END_OF_DOCUMENT_TOKEN_TO_BE_REPLACED