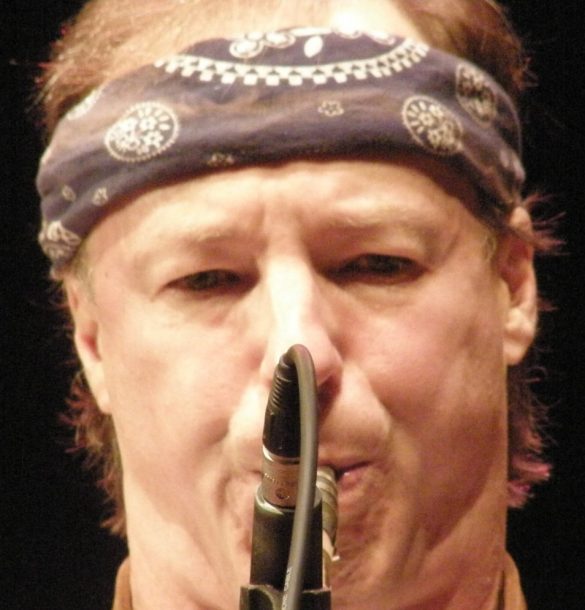 The interview took place with the 25-year-anniversary Walk Away tour, in Rybnik, Poland. The author thanks Jacek Panek for his help in preparing the interview.

Grażyna Studzińska-Cavour: You were born ninth of February… that’s exactly the same day that my son was born!

GSC: You are Aquarius, I am Aquarian so we can talk not about music and your family life… but about stars for example…

BE: Here we go! Whatever you want!

GSC: I’m a big fan of Walk Away since my first year of studies when they started… you recorded “Petite Blonde”… lots to talk about! But just say: why Walk Away?

BE: Well… I mean, I usually play with my band all year. And I heard the music of Walk Away fourteen years ago from Chris (Zawadzki) and he said “would you like to do some concerts?” and it was in between tours for me and I thought “why not? Let’s try”. And we had the relationship since then.

GSC: So he was the “agent provocateur” of those common gigs?

BE: Yes. He heard me and called me first asking me if I wanna to be a guest.

GSC: Both in Gliwice and here in Rybnik you made extremely lively and energetic performance together, full of vigorous elements, funky and groovy. Sax conversations with Adam Wendt seemed to fake some arguments, you were also a bit rude while trying to get Krzysztof (Zawadzki) mistaken in his rhythm. Do you like the atmosphere in Walk Away?

BE: I like funky-groovy music, it’s interesting to me and similar to some other staff I do so we complement each other and it’s a lot of fun. So I played with them several times and it’s a lot of fun for me, cause I like to play with musicians that are very good and the musicians I have fun with and that’s what I have with these guys!

GSC: I can hear that your style varies. The project is in the mood of “Push” with Marcus Miller and Bob James rather than your Touch” CD.

BE: You know, Touch is with a little bit more variations but all the records I’ve written so far or I made content to, they all come from a rhythmic base so people while listening can get something of that in all my records.

GSC: Your album The Other Side of Something as well as Soulgrass, Have Fun… most of your records are very crowdy, are full of musicians, full of people. Victor Wooten, Bela Fleck, Richard Bona, Dennis Chambers, Randy Brecker, Vinnie Colaiuta, Lee Ritenour, even Willie Nelson or Adam Rogers (with whom I had pleasure to talk a month ago at the Palm Jazz Festival) and many many more… do you like crowds in music?

BE: Some are. Certainly yes. But I’ve done some CDs where it’s been just a few… but I make sure that whichever musicians play on the record the record sounds like it’s coming from the same group. And I don’t do all different kinds of music on one record I usually do different records. Just like my last CD, you mentioned, called The Other Side of Something. That’s sort of another kind of record after Soulgrass because the music in the last five years has been with banjo, violin… and now it’s a different kind of music, but it all sounds like it’s coming from the same men and the same area. I’m trying to do that.

GSC: …but you were also the member of Mahavishnu Orchestra….

BE: A long time ago, yeah. Yes, I was. And that music was very funky and groove oriented also. You know, I like rhythm. And I like drums and I like things that inspire me rhythmically and that’s the kind of music I usually like to play…

GSC: I had pleasure to talk to Trilok Gurtu a month ago. Did you have the opportunity to play with him in Mahavishnu or was it later?

BE: No. I played and recorded with Trilok and with his own group a number of years ago and we have plans of putting a trio together in next couple of years so me and Trilok will be doing something together once again.

GSC: Dean Brown on your Soul Insider and now here doing a stage show. Are you both the fun-loving personalities that fit together? Friendship maybe?

BE: Yeah, of course! We think alike in a lot of different ways. We come from similar backgrounds, we’re both from New York, I mean, we lived in New York for a long time and he did many tours with me and my group. I like his music and he likes my music, we like playing together so it works all perfectly well. But it’s also personalities not just music but personalities of two guys.

GSC: You were the third Bill Evans in Miles Davis team. Bill Evans, piano player, and Yusef Lateef, the “hidden” Bill Evans of sax. Did you have the chance to play together?

BE: No. Unfortunately not. I didn’t even know Lateef played with Miles!

GSC: As a young and shy boy you must have felt awarded by playing with Miles Davis? Was it a kind of practice school, a workshop for you? Push was a kind of tribute.

GSC: You talk about learning experience and is there any teaching in your life now? Do you lead your master classes?

BE: You know, I do sometimes, and I like to but I travel so much with my group that I don’t have the opportunity as much but I enjoy it because I took a lot of lessons and met a lot of good teachers as I was coming up so I have a lot of knowledge from different teachers that I would like to pass on so when I get the opportunity I do.

BE: Sure, I do. I play with them. My banjo player is young, he’s new, my drummer Josh Dion who plays in my group is also young. I love them. I love to play with young musicians and have the opportunity to bring them out.

GSC: Bring out, you say and what about bringing up? What about your father? He was a piano player, was he inspired by a famous “jazz name” of the big two and predicted the music career of his son at birth or was it just coincidence?

BE: Nooo. The coincidence, I think. He basically played piano when he was very young. Up to twelve years old or so but he used to teach me classical piano as I was a kid. By ear. I was learning piano by ear so that was really helpful in my future job.

GSC: Your style. You play fusion but in the lyrical way, are you romantic? Is it anything except music in your life or are there any other hidden features or hobbies of Bill Evans?

GSC: The technique you use is rather rare among saxophonists. A lot of staccato, changing instruments… What is so special in your attitude to sax? Why sax, why you chose the instrument?

BE: The instrument sort of chose me. I was listening to a high school, a middle school band playing jazz and I saw the saxophone players get up, you know, they take solo in starlight, and I thought “that’s what I wanna do! That’s the instrument for me!” And I liked it from that point on. I was eleven years old.

GSC: Soulgrass was nominated for a Grammy… what does it mean to you? Are awards important?

GSC: Big stage or a tiny one as in Jaworki? And why?

GSC: A friend of mine, reminded me of the great concert of you from the beginning of nineties, namely in 1991 in Paris, with Miles, Al Foster, Herbie Hancock. Do you remember it after so many concerts worldwide? Is it a kind of professional co-operation and atmosphere you like? Are some gigs more memorable than others?

BE: Yes, of course I remember it! But do I remember every concert? No, not even close. There are a lot of good concerts that I play with my group but it’s hard to remember sometimes. That is what I do for a living so I play sixty or seventy per year, so in ten years it makes seven hundred concerts! It’s impossible to remember but that was a special concert. It was so many great musicians on stage, Herbie and Miles together, so that was memorable. Absolutely.

GSC: Do you prefer to be a leader or the member of the group?

GSC: And if you’re not a leader, like today? What is the difference?

BE: Oh, here it’s fun, you know. I’m a leader most of the time. On occasion it’s fun to not to have the responsibility of the leader. Sometimes you just come up and play. As a leader you always have things to do and think about.

BE: Polish audience is great! You know I find people here like music. Of course, they like it everywhere in the world it doesn’t matter whether you are in Spain or China or Thailand, or United States or wherever, people are people on the little planet and when they like this kind of music, they come.

GSC: Your contact with the audience is great. You are not only the performer but also the devoted news blog-writer, how do you find time for that?

BE: Well, I forget. Sometimes my webpage is empty. I just forget it. I did it just a few days ago but sometimes… I just get lazy and I don’t do it enough but I want to do it more. Some people do it every day but I’m not like that. I write when I have the inspiration.

GSC: But that is an important feedback. What kind of feedback is better and more informative for a musician-onstage applause or the written one?

BE: On stage of course. I’m not a real computer blog person.

GSC: You write about your professional life as it was just a hobby and fun but it is hard work.

GSC: The job of leaving and returning, changing places and people, always on the run, difficult for a family member, what do you like in it?

GSC: Ok, so coming back to Aquarians: Aquarians are the signs of freedom, what does the word ‘freedom’ represent to you in music?

BE: To be able to play music you wanna play. That’s the freedom. And fortunately I can do it.

GSC: Your plans for the future? Do you know which way to go?

BE: No idea. Just to keep playing music. Learning how to sing better. And to continue let the music grow. That’s my plan. To keep it simple.

Depending on how he looks at it, Kenny Garrett’s latest album, Sounds from the Ancestors, has been out for an eternity or an instant. Recorded … END_OF_DOCUMENT_TOKEN_TO_BE_REPLACED

As I delved ever deeper into the 14 albums that document the Larry Goldings/Peter Bernstein/Bill Stewart trio to prepare for our January Zoom conversation, what … END_OF_DOCUMENT_TOKEN_TO_BE_REPLACED

The musical avant-garde is an area where creative people who have earned wisdom through a lifetime of experience can flourish. Wadada Leo Smith, who last … END_OF_DOCUMENT_TOKEN_TO_BE_REPLACED

Wisconsin-born and proud: For all of the avant-everything complexity Ethan Iverson has applied to his solo projects or the sounds he created in his role … END_OF_DOCUMENT_TOKEN_TO_BE_REPLACED